Back in this post we gave an overview of several types of minimal shoes. Since then I've been wearing huaraches almost exclusively.

The longest day of backpacking I've done in them was 17 miles (established trails, very light pack). The balls of my feet were a little raw by the end, but that was mostly from the friction between my foot and the top of the rubber sole. You could probably decrease that by gluing a piece of garment leather to the top of the sole, but I haven't bothered. I like having tough feet. :)

Recently I went for a six mile hike on sand and small pebbles in Joshua Tree and didn't have any issues with rocks after the first half mile or so. Somehow it seems like you learn to walk a bit differently after a while so you don't pick up as much junk. Initially I strongly recommend carrying a different type of shoe to switch to if you're planning to do a long wilderness walk. Well, that or just wear five fingers, or Merrell's trail glove. That way you can get used to a thin sole before battling the pebbles. I wore my five fingers backpacking until I wore through the sole.

Mostly I wear my huaraches for normal day to day wear. Short runs, hanging around in the office, biking... just normal life. One surprising side effect of always wearing them is that lots of interesting strangers have started conversations with me on public transit. Also a shocking number of people think they're really "cute." Go figure.

Pros:
- Cheap. ~$20 a pair if you buy a kit. Less if you're creative.
- Easy to make and repair. It took me about twenty minutes to make my first pair, and I've repaired them several times with a pen or pocketknife.
- Pack small
- They also seem surprisingly good for running, though I'll admit I haven't run much distance in anything else as I'm just getting into running now.
- Closest to barefoot you can get and still be fed at restaurants.

Cons:
- Pebbles! They sneak in and poke and you have to clear them out fairly often until you get the hang of walking without scooping them all up.
- No socks. Because of the string between the toes in the standard lacing setup you really can't wear standard socks with them. On cold mornings I wear my ghillies instead to keep my feet warm.
- Not great for side hilling and parkour. When applying force 90 degrees off from the direction you walk in the sandals try to rotate around your foot and it can hurt a little bit.


People have been going crazy coming up with new lacing methods for these things, but I've mostly only used two: slip on and traditional. I prefer the slip on method for walking. Because all the strings in this tying method are doubled none of them end up digging in quite as much, especially on the back of the foot. Unfortunately I find it difficult to keep this method a just the perfect tension for running, so my shoes end up a bit loose. It makes it more awkward to run and the slack allows everything to slide more creating more chafing.

So lately I've been using the traditional style. Ironically when I went looking for directions I seem to have accidentally made this style up. I start with the basic setup where the string goes from between the toes, to the outside, then around the heel and to the inside. If you watched the video he talks about wrapping the string back around right after you go through a hole to "lock it" in place. I've found that I enjoy doing that several times at the inside hole. This raises the string on the back of the heel, so it's less likely to fall off. It also allows so play in tension between the back of the heel and the part you re-tension and tie every day making it a lot less fiddley.

After doing the wraps around the hole I wrap the remaining string around my ankle and lower leg until there's just enough to tie off. Then I tie off to the string coming from between the toes to the outside with an overhand knot and slipped overhand knot (make the knot like usual, but don't pull all the tail through, so you end up with a little loop). One overhand doesn't seem to be enough to hold it, but the second one being slipped makes them easier to get off again. It also lets you eat up a bit of slack in the loop so you don't have a long tail dangling around.

This tying style is what I've been wearing almost exclusively lately, though mostly it's because I'm too lazy to switch between them every time I switch between walking and running. Feel free to experiment though. Fundamentally you're just tying a piece of sole to your foot. There's lots of room for experimentation.

There are several different choices for sole material. My first pair was a leather sole (fairly thick cow hide). Those lasted me about three months and were super comfy. They are floppy though, so it takes a bit more skill to keep small stones out of your shoes. I suspect they'd last a lot longer if I wasn't mostly walking on pavement though.

Hoping for a longer wearing sole I bought a sheet of Vibram Cherry Outsole from invisible shoes and used it to make a pile of shoes (huaraches for Brewer and I, new soles for Brewer's Ghillies, and fancy sandals for a friend). Those soles wore quite well, though were a little floppy. The holes on the sides eventually ripped out, but that's pretty trivial to fix even in the backcountry. I wore these soles for about a year. 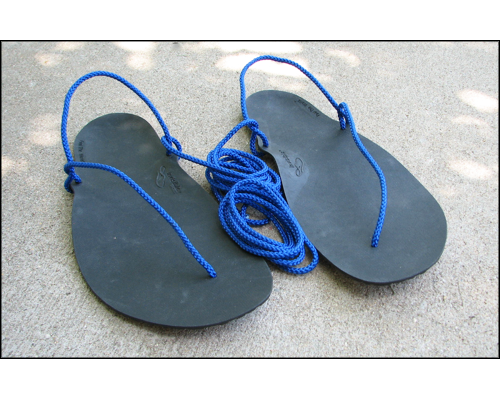 I eventually retired those and have a new pair with the 4mm Connect soles. They're pretty similar, though the side holes are pre-formed so they shouldn't rip out as easily. They're also shaped slightly so it's a touch easier to keep rocks out. I am using their laces this time instead of random string from the hardware store, and while it's comfier it also wears out way faster, which I find annoying. When I get around to it I'll switch back to a leather lace. Leather laces are a little harder to get your hands on, but have a really nice amount of give for walking and the knot on the bottom wears pretty well.

I've also seen people using mountain bike tires, but I haven't tried that. If I was spending less time on pavement I'd probably just use leather soles, but the various rubber soles are a nice compromise for city living. Ideally however I'd like to use the cherry material and make myself some moccasins for the winter so I can wear socks and keep the rocks out. It'd probably also make it easier to keep dry feet. So far my ghillies are doing okay for wimpy California winters though.

Update: The connect soles have lasted wonderfully.  I've been wearing them as my primary shoe for at least fix months now, and unlike the cherry sole the side holes haven't made any signs of ripping out.  The string also stopped wearing out as quickly once the sole warped to my foot.  It just took a bit longer than it had for the other soles.  I also found an old un-belted car tire so I'll probably try that next.