Baking in a frying pan

Recently, someone on Google+ turned me on to an old AMC pamphlet, which suggested a cool old camping book called "Book of Camping and Woodcraft" by Horace Kephart.

I've been reading through the book, and got particularly interested in the recipes. Angie and I buy most of our food in grocery stores, like everyone else, and we thought making more of our own bread would be cool.

The book mentions an interesting cooking technique, where you "bake" bread in a frying pan. First, you put it on some medium-heat coals and let the bottom of the bread harden a little, so the bread will hold it's shape. Next you tilt the pan up with a stick next to the fire, like the photo below. 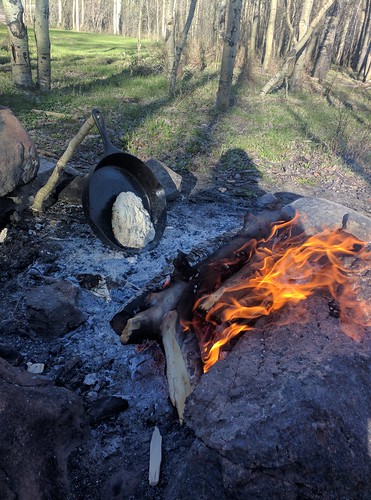 Every so often you rotate the bread in the pan, and eventually flip it, making sure it gets cooked nice and evenly. The bread above is literally just flour, water, sugar, salt, and baking powder.

The bread came out pretty good. Yesterday, we were hanging out at a campsite all day (something we're kind of bad at doing... a do-nothing day like yesterday usually involves bathing in a river, cooking complicated food, going on a run, doing a body-rock type workout, etc.)

Anyway, we made chili using Angie's cast-iron pot strung over the fire by a tripod, our favorite method for slow cooking. We wanted corn-bread to go with it, but the pot was already in use, so no dutch-oven-style cooking. So we tried the method above again, but on cornbread this time (again a recipe from the above book, 1/4 flour 3/4 corn-meal, water, baking soda, sugar, and salt. 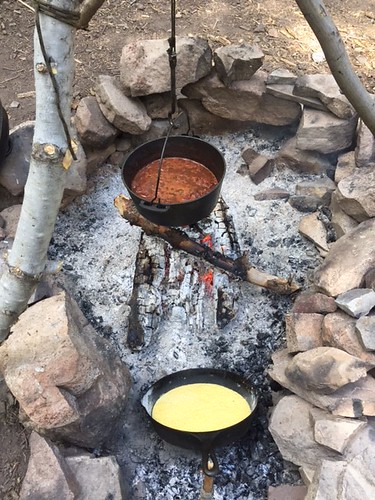 Here we're doing the initial stiffening process, before tilting the pan up. With the corn-bread this step took a little longer, since it was a batter instead of a dough.

It came out quite good! This baking method didn't cause any issues. Next time we do this though I think I'll pour the corn-bread batter directly over the chili and just bake it all together, since in the end we wanted to it eat together anyway.

We've been surprised just how easy and fast baking soda breads are, and how easy it is to bake like this on a fire.