I'm going to talk about several things in this part. A teardown of my Old shoes, and some new shoe ideas and thoughts.

Teardown of old shoes These are the shoes I found I could actually backpack and hike in, the first (and only) success so far. Their primary flaw was that the heal stretched and I would step on the heal seam. This is a non-turn-shoe made as a simple 3-part moccasin: 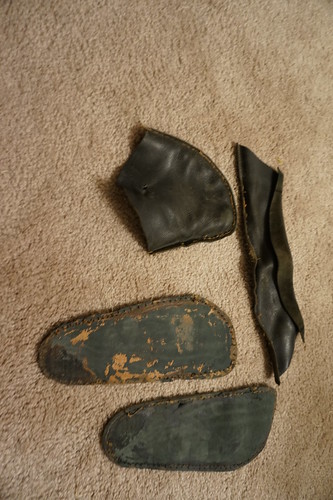 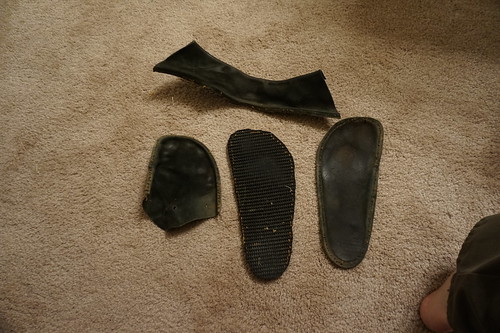 It's interesting that the barge cement was still holding parts of the leather very firmly.Looking closely you can see it tore the surface off some of the leather - I glued that leather shiny-side down, and it seems that the shiny bit (That is, the grain in leather terminology) tore off.

You can see very significant stretching in the toe-box. This was expected and is part of why the shoe worked, but it's fascinating to take the shoe apart and actually see it.

The stitching was holding a lot better than I expected. Pulling this apart took a while and was surprisingly difficult. It had torn out around the heal. That spot had been stitched too many times already so I couldn't repair it again... the leather was too perforated, but besides that the shoe was still pretty solid.

New ideas
Jess went to england and came back excited about the idea of a roman boot. This is a welted lasted turn-shoe with a center-seam sewn after turning. This makes the turning process far easier, which is exciting itself. Here's my sketches of the concept: 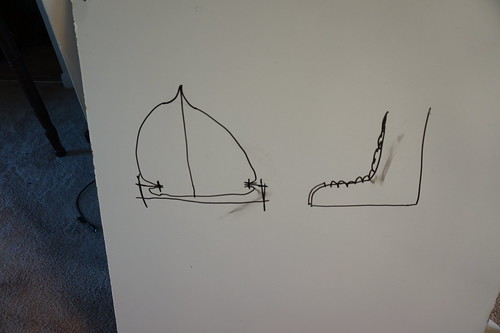 This is a lot to tackle and I wasn't confident I could get the toe to come out right at all. I wasn't sure how to last the boot either, so I decided to try mocking it out in canvas. Sadly I forgot to take photos before I disassembled it, but here's what I ended up with. 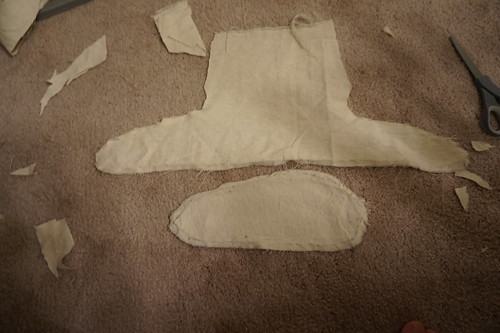 Note the upturn near the toe of the boot. When I tried it without that it just seemed too pointy if I didn't do some serious stretching of the leather. The upturn helps you end up with a rounder toe. on the other hand, the shoe would look more like this when done: 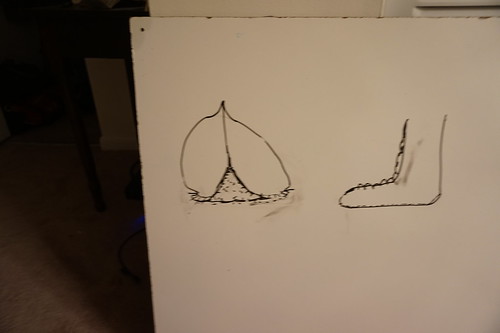 See how the sole pulls up on the toe? Given the shape of my demo fabric shoe above that would be a fairly sharp turn for the sole to make. It's already hard to get the conveyer soles I've been using to stay attached to the boot, and this makes it worse, so I tossed the idea out.

Jess is going to pursue this idea. I'm really curious to see how it goes, but I think I'm going to go back to something closer to my first design for a boot. I'm thinking of taking the design I had so much success with and


The goal with this design is an edge-season shoe. Something tough and light that qualifies as a "boot" and handles mud and snow well.

Not sure when I'll get around to actually making them, but the first step to any project is to actually get the details solid in your head so you understand what you're trying to make and how it will go together... and I'm getting closer!