Recently Jess and I met a friend of a friend. We were talking about long distance backpacking and primitive skills and that sort of thing. At some point the conversation turned towards animals, using them, eating them, etc. Partly as a meat-eater she was very interested in trying actually slaughtering and butchering an animal with us.

Jess had already been planning on getting an animal to put up some meat for ourselves. Partly because we like the meat better, and partly because as uncomfortable as it is, we both feel a lot more comfortable knowing exactly how the animal lived and died. We figure it's better than the unknowns.

So, one weekend our new friend came by our house. Jess had found a source of rabbits on craigslist and that that evening we drove out to their house to pick them up. We got 3 rabbits. A little younger than optimal for meat, but we decided to roll with it.

We had brought 2 rubbermaid bins that we'd carefully drilled holes in the tops of. We put the rabbits in these and went home. At home we tried to make the rabbits comfortable in our shower. 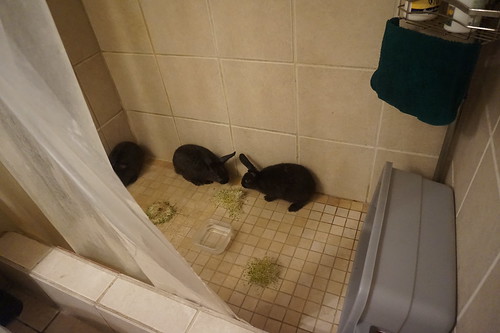 After not long they were hopping around pretty chill. We don't particularly believe in avoiding feeding animals before slaughter, it might make our jobs a tiny tiny bit easier, but I'd rather the animals are happy. We had some sprouts we grew that we'd failed to eat soon enough, so we gave these to the rabbits, they enjoyed them thoroughly 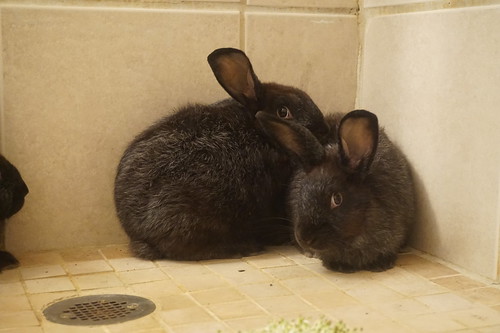 Overnight they didn't even hop out of the shower. Domestic rabbits are kindof ludicrously relaxed.

I should mention here that this was actually my first time taking part in slaughtering an animal. I've processed animals before, but they were roadkill. I've spent a lot of time thinking about hunting, and considering taking an animals life, and somehow for me hunting is notionally more comfortable. It sounds weird, but you get a chance to "ask" the animal, and in many cases it gets a chance to kindof decide to leave or not. It sounds crazy, but I know people who take game this way, and yes, they do take game in the end.

Anyway. The next day we talked for a while. We went to the rabbits and held them, petted them, got to know them, and we thanked them. Once we all felt (or at least said) we were ready, we slaughted the rabbits.

To actually slaughter them we used the "broom-stick" method. There are tons of good youtube videos of this method. Basically, you put the animal on the ground. You place the broomstick behind the animals head across the neck. Then you push down on the broomstick with 2 feet, and pull up on the rabbit's hind-legs until the rabbit dies. It takes only about a second.

We went one-by-one each doing one rabbit. I went first. I pulled to hard and popped the head off, out of fear that I might not kill fast enough. That wasn't a problem though. Afterwards I cried... it's hard to explain, I had done this with intention and knowledge, and I wasn't sad. My emotion was "crying", not sadness.

I explained to our friend that to me, it's important that it's a little hard every time you do it. If it wasn't hard, it definitely would not be okay by me. It would be creepy and weird and wrong.

Anyway, we all took a little time to deal with it, and then got to butchering. Jess had both processed enough animals that this part was just not emotional anymore. We were looking at meat... dinner. It took a minute before we realized our friend was not of the same mind and was still seeing the animal she had just killed; though she was pushing bravely on anyway.

We were so caught up in it that I failed to take any pictures. So, a while later we had this: 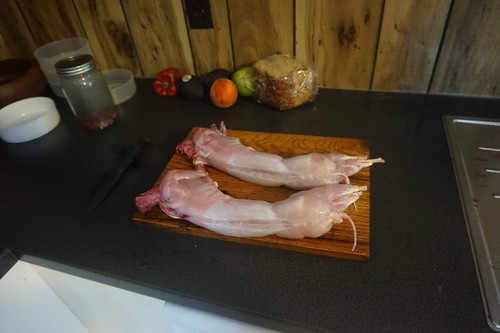 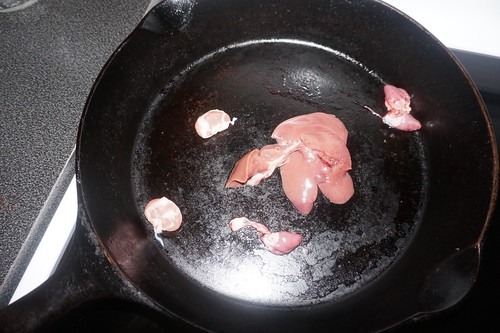 Oh, and blood pudding which I failed to take a picture of. We ate the blood putting and the organs as lunch.

We dried the pelts for other uses. Jess is going to try to tan hers. I tried to tan a wild-rabbit pelt and ended up tearing it up quite a bit due to it being so thin. So I declined. Domestic rabbit skin is much thicker though, so Jess stands a good chance of success.

That evening we roasted one of the rabbits for dinner. It was good. It was odd to eat domestic meat that I had butchered, I'm used to the meat being very rich, wild meat. This was much richer than commercial meat, but not nearly as rich as wild.

Jess and I made a soup with the rest of the carcass that made several meals. We used the meat in probably 3 subsequent stir-frys as well. We took the other 2 rabbits and chopped them up and froze them for later use. We'll make a minimum of 2 more soups, and the meat should be most of what we need for a few months.

So, now we can meat for a while where we know where it came from, how it lived, and how it died. There are few things I've found so grounding as eating meat where that is the case.  It makes you turn and look at the rest of your world the same way. Is it comfortable? No not entirely. Does it make me feel better about myself than eating other meat? Definitely. Would not eating meat make me feel even better? No... it wouldn't, and explaining that I'll leave for another time.

Sorry this post lacks the technical bits in the middle. We'll try and get more photos the next time we need more good meat.