Shoe Repair, on and off trail

Angie and I just both blew out another pair of shoes. Here's a picture of mine (with a repair) 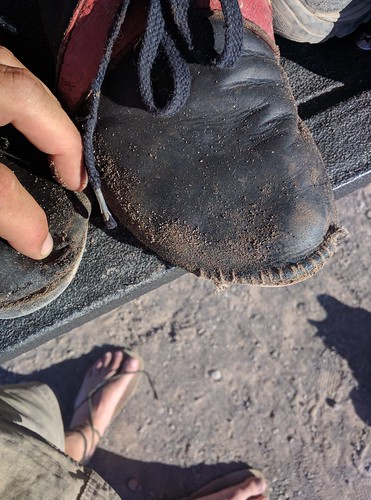 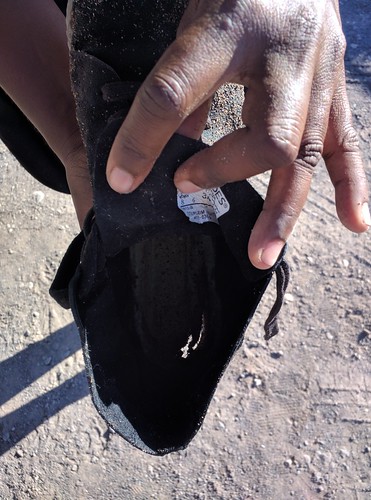 Anyway, this made me realize just how many times I've blown out shoes on the trail, and that I'm using a number of tricks to deal with this that I got from esoteric sources, experience, or face-to-face conversations... so I thought I'd share them here. These two pairs of shoes were dropped in a nearby trashcan. Here's another of my shoes: 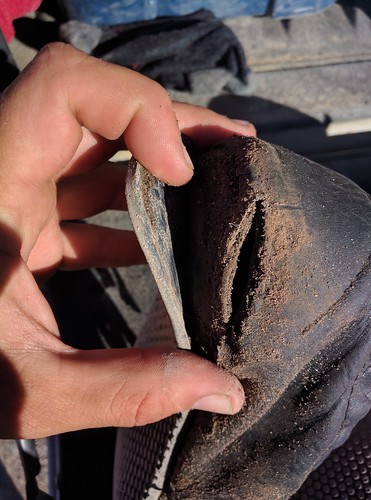 Here's a picture just after a quick trail repair on the presidential traverse in the White Mountains. 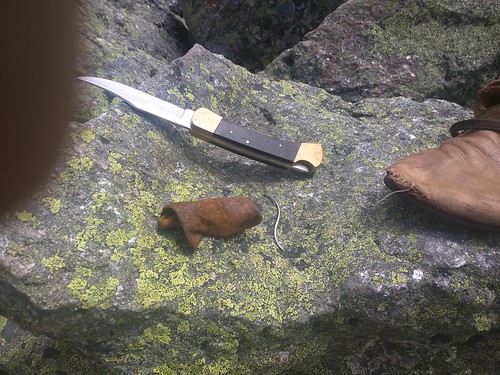 See the thing that looks like a metal worm in the middle of the picture? That's what's called an "S-needle". This is the single biggest secret to on-trail shoe repair. I prefer to use a waxed linen twine to do my repairs (partly because I use it for everything, but also 'cause it holds up pretty well). Another good alternative is tooth-floss (the old style, rather than the ribon stuff). That's what I used here, when I blew out a shoe on the JMT: 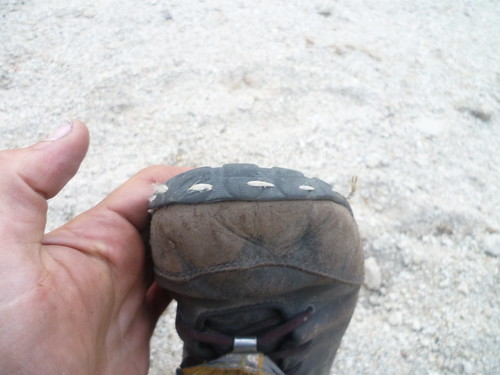 That last repair was actually done with a straight needle- but with great difficulty. The curve of the S-needle gives you something to get a grip on and really shove, so you can do things like shove it straight through the sole of a shoe.

Note that the first two are repairing worn out leather, where the last is actually repairing the sole coming unglued from the shoe. For the last repair,  to maximize milage before the shoe fails completely you want to stall until the sole is really pealed back a little, with maybe 3/4" unglued , but not until you catch it on something and separate it further. The thread on the toe will bust through fairly quickly (maybe 100 miles), but that's 100 miles farther than you would've gotten, and you can keep doing this repair until the shoe-sole or leather uses structural integrity.

Too make things a little easier I have a leatherman squirt PS4 on my keychain (the PS2 is even better, but no longer made). The pliers are really helpful if trying to repair heavier boots, which they have been used for on more than one occasion.


There is one other on-trail repair I will perform, and it can gain you a lot of milage. Many people, like myself, do not wear shoes evenly. If you wear more traditional shoes than I do these days (as I did on the AT), you may find that your shoe has worn, or the EVA midsole has collapsed such that it's hurting your knees, or such that it's created a ridge between your toes and the ball of your foot and is giving you blisters.

My solution to this is duct-tape. Take your insole out, and layer duct-tape on to the insole to "shim" the low spots back up level. If you do it right, graduating the sizes of the duct-tape you can get the shoe back to level. I've gotten an extra 200 miles out of a pair of shoe at least using this trick, and saved my knees some injury to boot.


Off trail repairs
On trail I pretty much restrict my repairs to sewing. Shoe Goo is useless in my experience, pealing off within just a few miles usually, even if you let it sit. If I wear through a shoe-sole I just hike on it (as I did on the JMT). My belief is that this is because you can't get the two surfaces clean enough... At home though, you can do this right.

For shoe sole seperation here's the trick:
1) Clean the top of the sole, and bottom of the shoe as well as you can with water, let it dry completely
2) Clean them *again* with mineral spirits, keep cleaning until your rag or paper-towel comes away CLEAN. Again let it dry...
3) Use "barge" cement, preferably original formula. I've heard the new "the fumes won't kill you as fast" formula does not bind as well. Put it on fairly liberally
4) Clamp the shoe as best you can, bar clamps or c-clamps work well. Particularly make sure you clamp near the tip of the toe, and that a little glue gooshes out as you do so.

And there you go! If you are used to repairing your shoes, especially on the trail, you can stretch them a lot farther before throwing them away. "Oh this shoe might blow out while I'm out" stops being a reason to replace them immediately... and with the average shoe lasting between 600 and 800 miles, the extra 200 you squeak out of each pair really add up.