Angie and I have been having a blast in Colorado. We were hanging out near Aspen, just checking out the area, and Angie found this great backpacking route that was supposed to be really pretty called the "4 Pass Loop". The route is variously reported to be 23,25,or 28 miles long, and goes over 4 passes, each at about 12,500 feet.

As it happened we'd peaked 2 14'ers (mountains over 14,000 feet) in the prior week. Both Longs and Mt Elbert, so we weren't worried about the elevation at all. When we talked to the local Forest Rangers though they said there was snow up there, and we'd want *something* for that. Angie didn't have either an Ice-Axe or crampons, so we ran down to the local outfitter and got her some Kahtoola KTS crampons, which are about the burliest crampon you can wear on a running shoe. We also rented a bear canister (BV450 if you're curious) for 3 days.

Well armed, we packed for the trip. We expected it to be sunny, so went somewhat minimal. Angie had just ordered some new waterproof running shoes, as although she loves her waterproof boots they're a bit heavy, and she wanted something good for snowy passes, but we hadn't picked them up yet. So she went with mesh shoes. My normal minimal leather runamocks wore out and we hadn't picked up my new ones yet either, so I wore my vivo-barefoot waterproof hiking boots... which meant I could use my crampons (which are intended for heavy boots).

I've decided I need to make a new shelter and ground-cloth after http://www.blog.smalladventures.net/2017/06/trip-report-zerkel-wilderness.html . I want an untreated shelter, and a treated ground-cloth. So, I decided I'd cheat, and Angie carried her 8x10 silnylon tarp and polycro groundcloth for the two of us. This meant my pack was lighter than it's been in a while. Otherwise I just had my alpaca sleepingbag, wool poncho, wool sweater, treated canvas shirt, hat, water bottle, cookpot/bottle, stove and fuel, spare pair of socks, puttees, ice-axe, crampons, and the normal various and sundry (repair kit, knife, etc.). 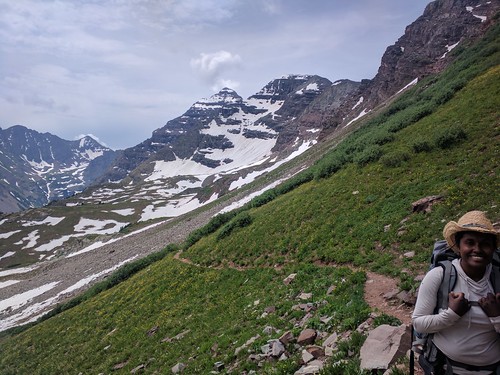 On our way up the first pass, called Buckskin Pass.

At the top we saw MOUNTAIN GOATS! There were 2 adults, a juvenile, and a baby, you can see 3 of the 4 here. Amazingly they came within probably 50 feet of us, they just didn't seem to care. This despite that there were two other people on top of the pass with a (very well behavaved) dog. I'd never seen mountain goats in the wild before. The adult and juvenile actually played at butting heads at one point, super cute.

This ground-squirrel really liked my hat. It came up within a few feet of us and kept *licking* it! At first we thought it was going to chew on it, but no, it just licked it. Clearly it was after the salt from my sweat, but we were just dying laughing watching this squirrel lick and lick at my hat. 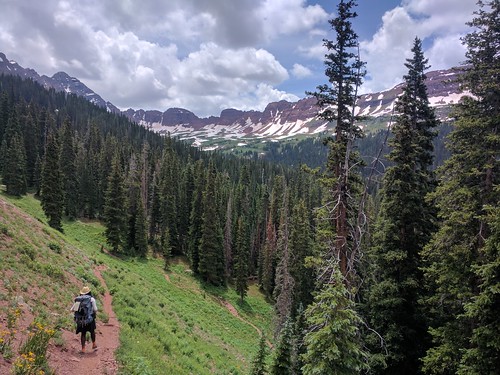 Panoramic shot of Snowmass lake, a lot of folks camp here before continuing, but we were worried about our 3 day timeline. We weren't sure if we'd get fair weather afternoons to be able to cross 2 passes in the same day, so watching the sky carefully we pushed on. 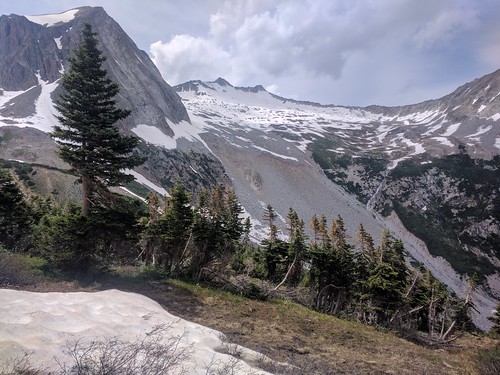 This is a shot upwards at Trail Rider pass, this was the trickiest pass. Sadly, I didn't get any photos of the tricky bits (it's hard to remember to take photos when you're so focused). Lower down on the pass, just a little above Snowmass lake there was a tricky traverse of a steep snowfield. I used my ice-axe for balance, and self-belay or rescue if needed, but skipped the crampons. Angie not having an ice-axe put her crampons on and used a single hiking pole (set short).

Farther up the pass I did use my crampons though. It wasn't steep, but the crampons made walking in the soft snow a lot easier. Near the top Angie chose to go on the rocks, as her feet were getting cold in her mesh shoes. I decided to try cramponing up the steep snow, since I had all the gear for it, and it was a safe spot, it seemed a good opportunity to practice. It was too soft to toe up, so side-stepped french-style and that worked pretty well.

Shot from the top of the pass, Angie is stretching out her knee on the right of the photo. She has some mild trouble with ITBS, similar to what I had on my AT section hike back on '09... no surprise as I think we'd done ~5000 feet of climbing in one day by this point, and ~2500 of descent. 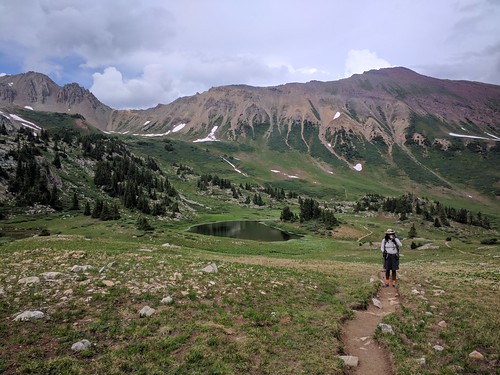 Dropping over the very very steep switchpacks on the back side it was still gorgeous as ever. We were getting a bit tired though, and it started sprinkling a little. The thunder was threatening so we started hunting for a campsite.

I pointed out a campsite in a small copse of trees. It was near enough to the river to get water, but well away from flood risk. Open enough to discourage mosquitos but still giving a little extra shelter from a storm. Angie noticed a deer at about the same time, which was standing in the middle of it. We decided this must be the spot.

Angie went to get water and I set the tarp, then as we cooked dinner we realized the deer was still hanging around. The whole time we were eating it hung out maybe 30' away. It looked a little gaunt. At first I thought maybe it had chronic wasting, but then I realized it looked really healthy otherwise, and that it was still early spring up at that altitude... It was probably just still fattening up after a long winter. The deer hung out for quite some time, but finally left when a group came down the trail yelling "Heeeeeeyyyyy BEEEaaaaarrr!" over and over again (I guess they were nervous about bears?).

It rained that night, and we got up a bit late, hoping things would clear up. They did for the most part, but the sky stayed grey, and nothing dried out.

Next day we set out over gorgeous fields of wild-flowers

The trail followed a river up the valley, in the middle there's a huge waterfall, the trail goes up the hill via the trees to the right of it.

And upwards in to the pass. The trail actually bounces through 2 passes in quick succession (Frigid Air and West Maroon), with just a couple of miles in between it only drops maybe 800 feet between the two making these very easy to do in the same day.  The shot above is one of the few spots of blue-sky all day. It sprinkled on us on and off, but never badly... In fact, I stayed shirtless for virtually the entire trip.

After crossing the last pass we realized we were only 6 miles from the trailhead! Since it was supposed to keep raining we figured to heck with it, why not finish in 2 days? So off we went. The exit was VERY muddy, and I was really glad to have waterproof boots and sorry for Angie and her mesh shoes, but she was fine. We even had one river crossing everyone was talking about up and down the trial, but with our experience it wasn't bad at all. I did it barefoot actually and we just went together. Angie loaned me her pole to lean on and I took the upstream spot so Angie could walk in my eddy and help hold me up :). We went right across. 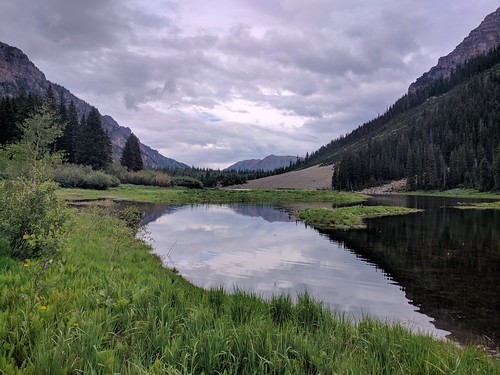 This is a shot of Crater lake which we passed on our way out. This is where the loop meets and you hit the ~2 mile long entrance/exit trail out to Maroon lake.

Angie's mesh shoes didn't work out quite as well as we expected, due to being cloudy and rainy, but it wasn't a problem. Her crampons worked great. I only used my sweater in the morning and evening in camp, and wore my treated overshirt for maybe a mile total. Overall we were very comfy, despite carrying way less gear than anyone else we saw (excepting the runners who were doing the loop in one day).

It's a busy trail for sure, that was the only downside, but at least when we were there (early july), not so busy as to be annoying. We still had a very private campsite. The views are absolutely worth it too, on par with the JMT.