In my continuing quest to find the perfect cheap raincoat that never wears out. I decided to try another experiment. I took my old 5.11 shirt that's nearly worn out, and got some otter wax bar for ~$12.00. I tried heating the otter wax on the stove first and brushing it on. That worked *okay* but it wasn't melted in by any means. 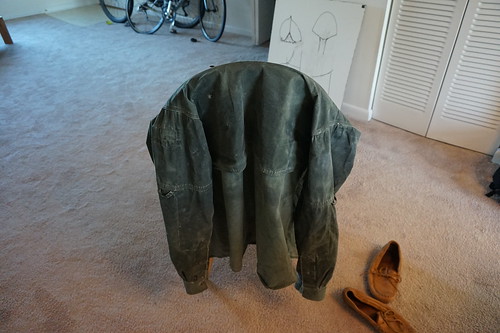 Next I tried folding it outside in, enclosing the shirt in a pillowcase (tied at the top), and running it through a dryer for 20 minutes. The dryer didn't get hot enough, so it didn't quite soak in, but it did do something.

Next I tried taking it to a laundromat, using their dryer (because the ones where I live now are pretty cruddy), and setting it on "hot". That worked better, but still not well enough.

Finally I used Angie's hairdryer with an air-director to get even more heat in one place. About 2 hours later I had it soaking in.

When I did it initially I ran out before making it to the back below the top flap, but I got the sleeves, the shoulders, the front almost to the waist, and the back down a little less than half-way. This should be enough to find out if it works. It's also not perfectly even. Otter wax sells a more liquid form, but I wanted to try the solid form first because, as I'd hoped, it didn't soak all the way through the fabric in most spots. This left the inside feeling less "waxy" and making it a little more wearable as a base-layer.

I'm excited to try it out. If it works there's a lot more experimentation to do. I'm sure it's possible to get the wax more even on the shirt, and in so doing probably use a bit less of it. Also, Otter was is supposedly made of all natural non-terrible stuff, which means there's a chance I can make something similar with some experimentation. I figure if their stuff doesn't do what I want, I can cut off a lot of that experimentation, and if
it does I have a clearer direction to go in.

Okay, so why am I exploring this? If you've been following this blog you know that I've gotten frustrated with commercial plastic jackets costing a fortune and then wearing out. In addition I've been working towards a gearset that doesn't really use much plastic. My last couple of experiments involved linseed oil, but I got frustrated with both the performance and the smell and moved on. http://www.blog.smalladventures.net/2015/11/linseed-oil-for-homemade-oil-cloth.html

In addition to the general search and asthetics, more practically speaking I've been using this same 5.11 shirt as my "light rain" coat lately, usually layered over my marino sweater, and then using a plastic silnylon poncho in pouring rain over the top. So far this has worked well for me, but it does mean soaking wet arms if I'm doing things in pouring rain. I also have to wait for the rain to slow a bit sometimes to pitch my poncho-tarp as a shelter, since I can't be under it while I'm pitching it. So good, but I'd love to make it better.

There are basically 3 traditional solutions non-plastic rain-coat solutions. A stiff plant fiber coat, leather, or the most modern coated canvas. The first is very effective, but not very mobile for backpacking. Jess has extensive experience (2'nd hand, but still) with home bark-tanned leather as a raincoat... several people and 21 days of continuous pouring rain in fact. So that's one clear option. Even made with a thin leather it's a bit heavy though, and it's a lot of work to make, so I wanted to explore the other option further, just to understand the whole space.

My 5.11 shirt certainly is part plastic of course, but I wanted something to experiment on that was the right material. It's ancient and worn out and about to be thrown away, so by doing it this way the experiment only cost me the $12.00 for the otter wax (plus dryer fees and electricity). 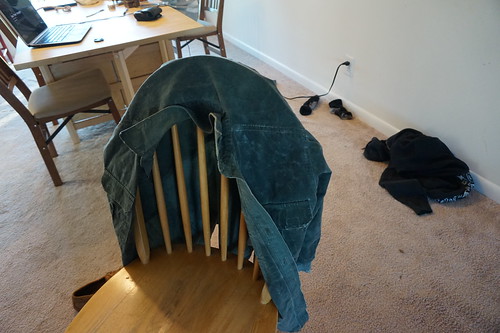 One more interesting bit of data if you're going to do this... It shrank quite a bit. It probably lost a half-inch to an inch across the shoulders. This shirt is already a very well worn garment. A 5.11 shirt near being thrown away, we're talking serious wear. It was well worn before Jess got it used in a park ~2010, she used it until we went on the road, then I got it and have used it very heavilly since since.. So, if you do this... make sure to start with an oversized garment. It's a lot of heat to melt in the was.

I haven't tried it in rain yet. I can't wait for a good rainstorm to give it a test.