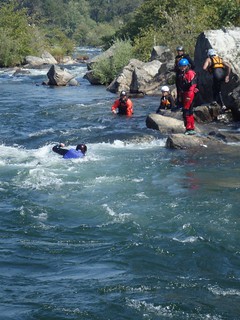 You should take this course

First, I highly recommend this class for anyone who spends time around water, or in the backcountry. The rest of my family nearly died on a backpacking trip not all that long ago up in the white mountains when they got caught by a hurricane (I wasn't with them on that trip). The tiniest of rivulets grew into barely crossable rivers. Steep hillsides became 6 inch deep running water across the whole hillside. They had to do *many* river crossings on or past the boundary of reasonable safety just to get out from where trees were falling around them threatening to kill them another way. My family did it and got out alive. This situation is not that likely, but now I can look at that river and judge when I will lose my footing, or whether I can swim it based on having actually been in rapids. This is a really good thing in my mind.

In other words, if you read this blog with intent to DO any of the stuff we do, this course is probably for you.

Second, a shout out to the Sierra Rescue folks. Julie and Don were both amazing. One of the fireman in the class said it was the single best class he'd every taken. I don't know if I can qualify it that broadly (I'm lucky to have taken a lot of really good classes), but it was extremely well taught, and a lot of fun, and I learned tons.

So, what is a Swiftwater Rescue Technician course? The course is aimed basically at two demographics. The first is professional rescuers (e.g. fireman) who might have as part of their jobs to pull people out of rivers. The other is lay-people who work around rivers and bodies of water and are likely to end up performing a rescue of opportunity. For example white-water raft guides, or folks who work for fish and wildlife.

The class started off with understanding the river. The had us swim around quite a bit in class 2 rapids. The idea is to understand how the river moves, where the eddies are, and how you can use all that to your advantage. One big surprise for me is that while being a strong swimmer is helpful, it's absolutely not necessary. Basically, if you are crossing a fast-moving river you need to swim effectively enough to move significantly slower than the river. Then you use the river's current to push you across by angling your body properly. As long as you are going slower than the river you'll succeed in moving sideways. Similarly sometimes you go faster swimming downriver, the main goal is just to be going faster so you have some momentum to punch past things that would stall you if you moved at the speed of the river. This is so much the case actually that probably the strongest swimmer in the class had the most trouble. They had to get over the idea that they could just swim where they wanted to go. The photo at the top is of someone learning to swim through the wall of an eddy using a barrel roll.

Next we did wading. One of the keys to swiftwater is to *never* put your feet down if you are moving. You don't put your feet unless you are absolutely still. So wading is okay as long as you aren't moving at all. The idea is that most swiftwater rescues are hands-on. The instructors theory is that you have a very very short time to get the person's head above water. If you have to do anything technical chances are it's going to be a recovery and not a rescue. So if you possibly can do it safely, just get in and get hands on. The picture below is of us using a wedge technique, this is great for creating a giant eddy behind you for someone else to work, or to drag a victim across. 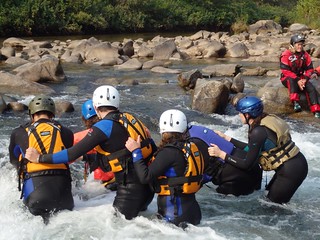 Then we did throwbags, which they stressed are useful but are way overused and overtrusted. One of the things this drove home to me is that if you expect to save someone with a throwbag, you darned well better practice a LOT. It's easy on land, it's really hard in the river. Another interesting thing to note is that generally you don't haul the person in, instead you just hold the rope, often letting out a little slack to swing them to shore, preferrably in a nice eddy.

Another rule of the swiftwater rescue is you never tie anyone to anything. Their are two exceptions. The first is a live-bait harness on your lifejacket. The second is a victim who will probably drwon if you lose them. The live bait jacket is a specially designed quick-release loop of webbing so you can drop whatever is tied to you if something goes wrong. It's called live-bait I think because it's usually used to tie a rescuer to a throw-bag. The rescuer then jumps in... so they are in the water on the end of a line, like bait on a hook. This is super awesome for deeper water. Instead of hoping your victim will grab a rope you can just jump in and grab them directly, then have your mates on shore swing you back into shore.

This picture is of two people helping pull one over and off of a strainer (the rope in the picture is holding the strainer in place, not a person). 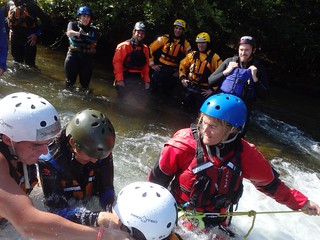 We also went over using boats, and paddling boats around the river. By this time Julie had discovered that I was thinking of doing some raft guiding eventually and decided to teach me how to raft. I've canoed and whitewater kayaked before. The boat moves a bit differently, but it's basically the same

Even more fun than the boats is using riverboards which we practiced surfing on to help build a better understanding of the river and currents. A riverboard is like an extra floaty boogy board. You wear flippers with it and move through the river using the flippers and often your arms as well. You can surf standing waves with them. They are in fact used for rescue as it gives you something to hand the victim when you get to them so they jump on that instead of drowning you. It also gives you a great view of the river.

And of course we covered some rope stuff. They stressed that generally ropes aren't the answer, but if you can't get in the water or use a boat safely you don't have a choice. We practiced pulling someone's head out of the water with a rope in the case of a foot entrapment, and then trying to free their foot with a second rope. We did this with Julie actually in the water pretending to drown. We also practiced pulling someone off a strainer (one of the rare cases where it's okay to tie something to them... in this case we laso'd them under the arms). And we practiced lasoing someone who was going down a river.

This is the easy way to cross a river (if you already have a tension diagonal line): 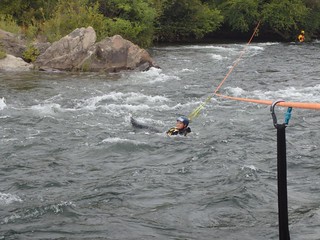 Overall the biggest thing with ropes is understanding how angles multiply forces and using that to your advantage. I already knew this from technical ropes, though even then one trick (mentioned in the swiftwater course) I only picked up due to discussions with another nerd in CalESAR. If you take a rope and pull it taught between two objects, if you push sideways on the center of the rope your force is multiplied infinitely. As you push sideways the angle decreases and the factor drops. By 120 degrees it's 1:1. This is really bad if you are trying to hold a rope straight and something (like a person in a river) is pulling it in the middle, and you need to account for it. On the other hand it's awesome if you want to move a car and all you have is a long rope.

We also did a bunch of scenerios. We had two groups for most of the time, my group was working with Julie, while the fireman worked with Don. Julie and Don are both white-water rafters having done a TON of rafting. Don has done first ascents all over the world. Don is also a firefighter though, and being male tends to use more... macho techniques, so that fit made sense. Julie is actually the owner of Sierra Rescue. Anyone, our group spent our time saving Julie for the most part, wading in and dragging her out, swimming her out, lasoing her, etc. We did live-bait and swim-outs with each other as well. At the end we did a scenerio with everyone.... We basically "killed" everyone (oops), the mistake was trusting one of the victims to help (the rescuers had him paddling). I was one of the backup's with a throwbag downriver - though was upriver from where everyone "died".