I'd like to open this post by saying that I only sort of know what I'm doing. I cut wood as a kid, but figured a lot of what I know out by reading. That said, I thought I'd write a quick post about some of my recent experiences cutting wood.

First step is to fell the tree. We had a dead tree that was leaning heavily over the driveway. I wasn't sure that it would make it through the winter without blocking us in, and we needed the firewood. So I dropped it. My biggest concern was that I'd block our driveway, and then be unable to cut the tree before we wanted to go somewhere. Jess was gone at the time though, so I figured we'd have at least one car free.

This tree was leaning quite a bit. A mostly straight tree will be converting fairly little potential energy into kennetic in the first few seconds of the fall, making them relatively safe. A leaning tree though is read to drop fast, so they are much more dangerous to cut.

Also, a live tree is flexible, this means when the tree starts to fall the remaining wood will act like a "hinge". If all goes well this "hinge" stays attached to both the stump and the tree. That's great, because then the base of the tree isn't going anywhere *else* (like through your head).

So, all that is to say that this tree was a dangerous tree to fell. Given that, I wouldn't even consider using a chainsaw (I wouldn't use one alone anyway, besides that I don't own one). The noise would keep me from hearing the first moments of the tree dropping, and the speed would cause me to cut a lot away in the last moments, possibly causing a catastrophic drop. I could've used a handsaw, but a handsaw is likely to get pinched in this sort of tree. Also, it would put me much closer to the tree, and likely in a crouching position. So, instead, I used a nice long-handled axe. 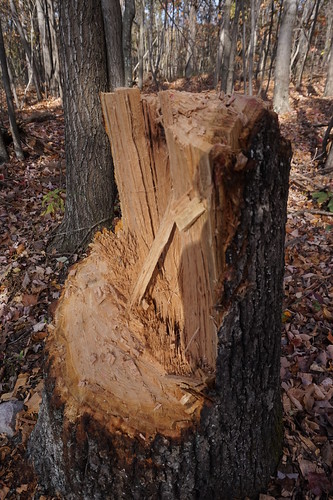 Notice how far I cut the back notch above the front... I wanted a serious ledge to keep that tree from kicking back in case it broke free. As it happened this wood was wetter than expected and the tree hinged down very very slowly. You can see the fibers from that hinge on the stump, just in front of the split, and behind the area I cut with the axe. It dropped so slowly that I ended up walking up several times and whacking it a bit more to get it to actually drop. You can see the results of that here: 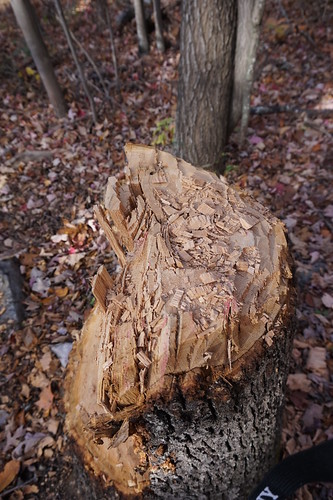 If you look closely at this you can see that I was hacking down into the split taking out more chunks of wood trying to get the tree to drop.

The drop worked perfectly. The top of the tree was mostly rotten, so it broke just at the top of the main trunk. This was ideal for me. It left two sections small enough that I could pull the jeep up and drag them with my 30k lb jerk strap, just like I've done in previous posts. This is how I cleared the driveway. The jeep has 2 front hooks, so I wrapped the strap around the trunk, and hooked each end to a hook, thus ensuring that I balanced the load and didn't risk twisting my frame.

The next challenge was getting the log up on something. With any saw you don't want to cut in to the dirt, so if you can you want to get the log up off the ground. Sadly, I didn't think to take photos, but here's what ended up working. I took my highlift jack and set it next to the log. Next I took a 2x4 and set one end on the ground on the far side of the trunk, and the other side on the jack, turned the direction in which it would be strongest. Then I took my 16k lb synthetic winch-rope (not on a winch) and ran this around the log, looping it through itself. I then tied a bowline in the tail, but with an extra 2 wraps around the 2x4 so it wouldn't slide down it. Using this kindof janky rig I got the log up off the ground and stuck a split log under it. So it looked something like this (this particular photo was taken later) 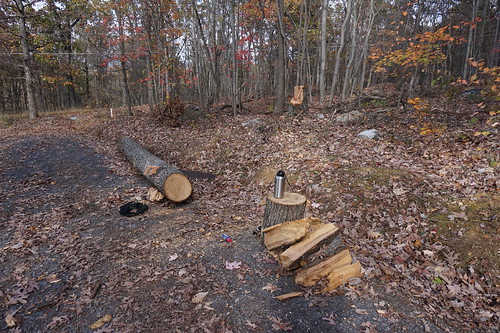 I then cut off a round or two. I have a great american tooth bucking saw I bought for this purpose. This tooth pattern is known for being a little hard to drive through wood, but fairly fast. I understand that it's also best used on hardwoods, or dry softwoods. Since I was working on dry hardwood it's probably about the best saw I could have had. 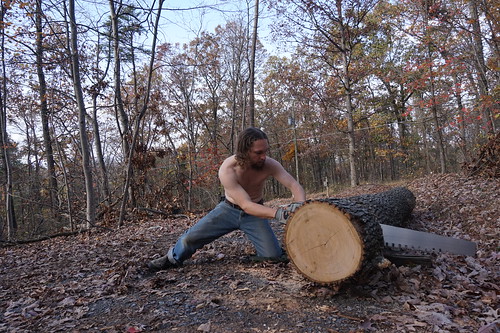 Working with this saw I can cut a round off the tree in about half an hour. Not too shabby. The only flaw is I can only do a couple a day without injuring my shoulders as they aren't used to this particular exercise. I'm a chicken and haven't brought myself to try sharpening the new saw yet, I'm sure I could cut more efficiently, but I want to wait until sharpening it will definitely make it better. For now I could easily make it worse.

One thing I might change is the length of the saw. This one is long enough, but I often end up sawing partly with the starter teeth on the end, rather than just with the good teeth in the middle. It's perfect for smaller logs, but if you were cutting this size logs a lot, I'd go a little longer.

I've been using a trick I've seen people use in crosscut competitions where they spray the blade with oil occasionally. I've been using WD40. I'm sure it's not optimal, but it'll be good for the blade and it seems to work.

Occasionally though you have to shift the supports for the log, so you can keep taking off rounds without pinching your saw (and dropping it on the ground again). To do this I've been using the scissor jack from my jeep. It works okay, though I think I'm stressing it a little because it's so low down. 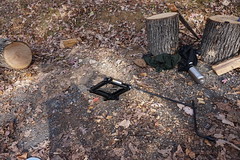 Of course, this is only one point of contact, and sometimes it doesn't work so well... oops! it's back in the ditch. 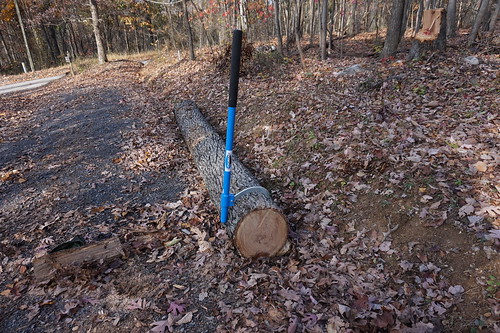 I recently purchased this aluminum handled log roller, and decided rather than dragging the log out with the jeep again, or trying to get under it to jack it, I'd dry rolling it. You can't really get it in one move, but I found I could capture progress by bracing with logs. 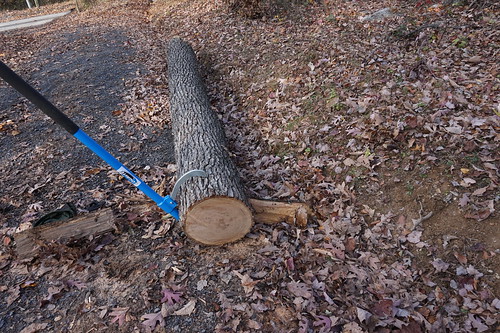 And eventually I had it off the ground and up on top of logs again. I'm not so sure about this technique though. In some situations I can imagine it being perfect, and with two people it would be a lot safer. Alone it's hard to hold the log in it's new position, and handle moving something to brace it. Still, highlift jacks aren't exactly safe either, and neither is dragging things with a vehicle. I think I'll just pick whichever looks best for a given problem and go with it. 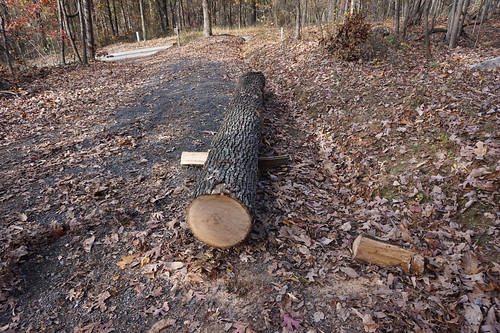 Below is 4 rounds split and stacked (the slightly rotten ones are the top round off the trunk, where the tree cracked when it dropped), and about 1/4 of the main trunk. So the wood below represents maybe (and this is really rough) 1 hour of tree dropping, 4 hours of sawing, and 20 minutes or less of splitting. So <6 hours of work. 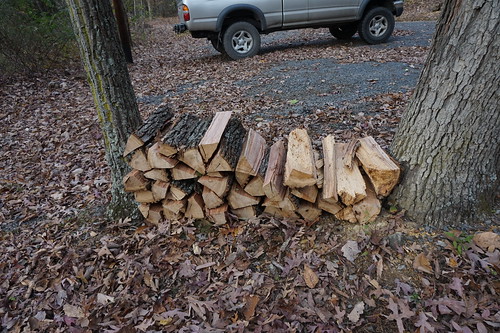 I could've gone out and got a chainsaw, but I was really curious to try it just with traditional hand-tools (well, and a really nice aluminum log roller... the bit with the jeep was to clear the road, I didn't have to do it). I'm a far cry from the quantities I've read of people cutting, and I have to spread those 6 hours across several days to avoid injuring myself. But hey, they knew what the heck they were doing :P.

While an interesting experiment, I didn't have time/energy/inclination to cut nearly enough wood. I do still have a day-job and we had a lot to do after moving in. So, we picked up some phone numbers at the hardware store and Jess is going to order some firewood within the next couple of days :P.