When I ordered my lift-kit I didn't realize that the new shocks were too long for my bumpstops... oops! This is *okay* for the most part, but if we hit a bump really hard, it's always possible we could bottom out the suspension and damage the shocks.

So, I finally got around to extending my bumpstops so that wouldn't happen. I purchased some hockey-pucks at a local sports store, and some JB weld at a local hardware store, and made these: 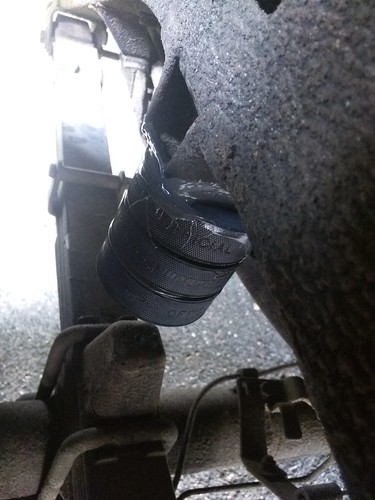 Strictly speaking this is actually an extension for the landing pad the bumpstop hits.

I wanted a firm bond so first I wiped off whatever gruck I could off the landing pad. Then I used mineral spirits and a rag to wipe off more cruck, then I sanded it down to remove the undercoat/paint layers, then I wiped it with a cleaner rag and mineral spirits again. Here's a photo partway through the sanding. 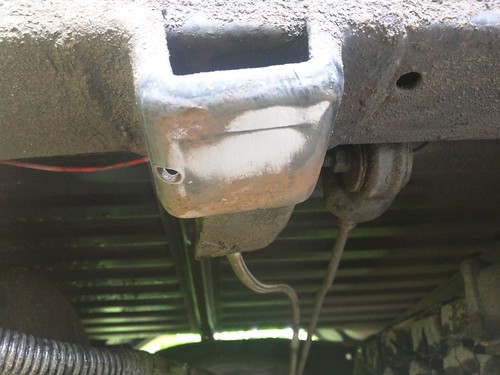 I also cleaned the pucks with mineral spirits, figuring it couldn't hurt, and after letting it all dry a little I glued the pucks in to place. Each puck is about 1" thick. I did some testing and decided that 2 pucks might *barely* be enough, but might not and 3 pucks should give me about 3/4-1" of travel left in the shock, just to be safe. 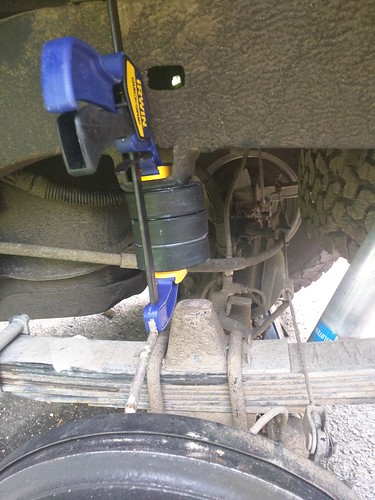 I don't know how long they'll hold, but JB weld is pretty good stuff, and having properly prepped the surface there no reason it shouldn't hold well. One advantage to this over using a bolt through the pucks is then the bolt would hit the bump-stop instead of the rubber pucks.