I've been using this backpack for some time now, including for search and rescue trainings, hiking the JMT, etc. and I love it
http://www.blog.smalladventures.net/2010/10/myog-external-framepack-mod.html . Since that post I did indeed replace the hipbelt with one for a kelty pack, a little hacking and I got it to work quite well. 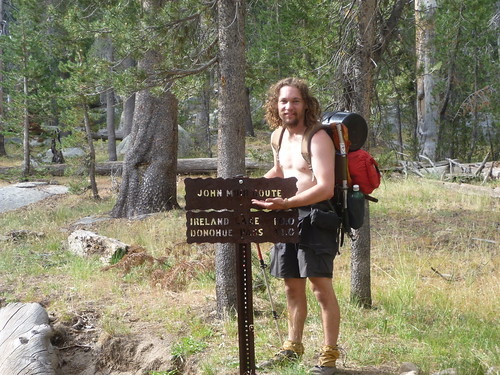 So, my goal is to emulate this pack. I thought about making a pack from scratch, but having software experience I realized maybe that wasn't the best approach. It would be an adventure, but if I wanted a final result that functioned, why not try replacing things piece by piece? Plus, while maybe I'll replace the aluminum frame eventually with something homemade, I could retain aluminum frame for now and get a backpack with no plastic in it much faster.

When I got the pack it had 2 fabric panels (made of nylon in a canvas like weave I believe) which hold the frame off the back. 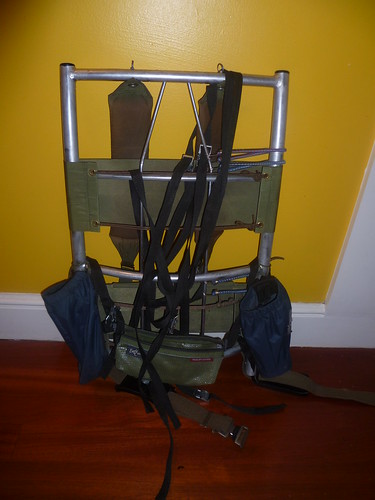 So, I decided my first task was to replace these. I had some 8 ounce canvas lying around, but I didn't have any grommets. Also, the last project where I tried grommets in that fabric didn't turn out so well, as the grommet pulled out: http://www.blog.smalladventures.net/2014/07/dyi-chair-seat.html. For this I wanted something that would hold up well and not suddenly fail while out in the bush.

Years ago I got my hands on a book called "arts of the sailor" from which I learned a lot of my knot and ropecraft. I remembered it having a description of how to make a grommet using thin twine. This is where kindle's excel, as I had the book with me!

I had the waxed linen I use for almost all of my projects. After sewing up the canvas in to the right shape, with a triple layer end to help support the grommets, I started in on the grommets themselves. The first step is to make a ring-splice: 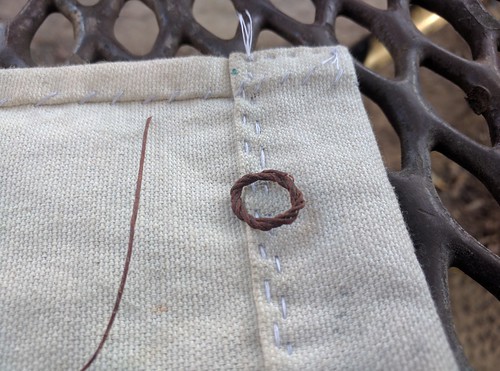 Next poke a hole in the fabric with an awl, and ream it out to the right size (ideally pushing the fibers aside, rather than breaking them). And then begin sewing the ring on to the fabric with a whipstitch that passes through the reamed out hole. 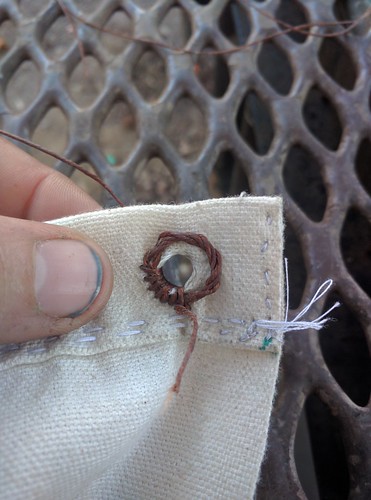 Here's my first completed grommet, not the prettiest, but it should work 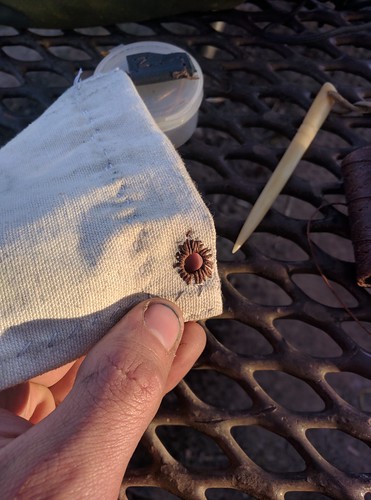 I did 3 on each side of 2 panels, by my 6'th one they were looking a lot prettier, the second panel I did is on the bottom. Using the same linen twine I legrolled some 8 strand 2 ply cordage to actually tie the panels on. In total making these 2 panels took probably a day and a half of sewing, because I wanted them to be extremely solid, and was doing it by hand. Interestingly, more of that time was spent sewing the panels themselves and reinforcing the ends than was spent on making the grommets. 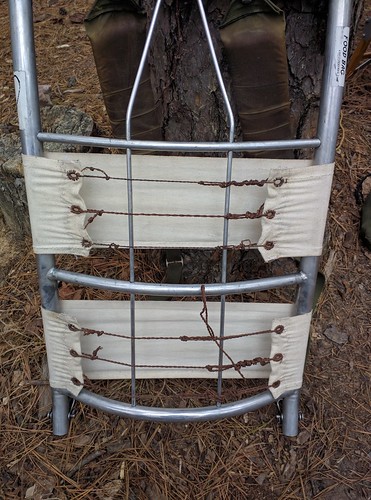 With that done, the next step is the shoulder straps. Having recently replaced my roll quiver, at least for now, with a bamboo tube, I had some spare leather lying around, so I cut the shoulder straps from that. The cord tying it to the frame is nylon, since that's what I had, but it'll be easy to replace with something else, probably silk or linen so it doesn't chafe my side too much. 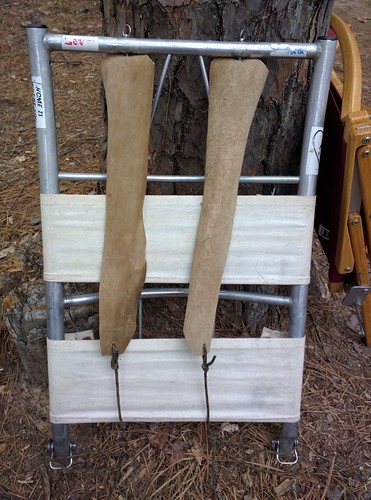 This is a usable backpack as is, and fine for a 2 or 3 day trip, and with no plastic (save some old stickers on the frame :P). To make it really nice I'll need to build a hipbelt as well. I'm looking at a base-weight of ~20 lbs for my no-plastic kit, so I need the pack to carry at least 35lbs well, preferrably 40+. At those weights, while I could do without a belt, I'd really like one.


The belt is a little more complicated, I'm thinking leather, but I have to get it shaped right, and figure out a way to suspend the pack from it that doesn't roll the belt... I may go with the partial belt, like the original, or a belt that goes all the way around, like the kelty hipbelt I had on it until recently.

Now that I learned how to make a proper twine grommet, I kind of want to go back and add these to my cotton tarp, as the tie-outs need repairs every so often due to wear.

I've now used this for 6 days of backpacking recently (in 3 back to back overnight trips, 20 miles each), and another 3 day trip a little while back, this included some near winter weather.

I've been using hemp twine for the shoulder-straps. It works, but I've also been using it for my waterbottle and that one simply broke eventually, so I probably need a tougher twine.

The tightening strings on the back panels on this went *over* the metal stays. When I strap bags to the pack the bags push on the twine and loosen the back panels. I moved them so they run under the back stays, instead, directly behind the panel, this solved the problem.

Lastly, the lack of a hipbelt has NOT been a problem. This surprised me. The last 3 overnight trips were all in the mountains of New Mexico, with no reliable water sources. As a result I was carrying ~7 liters, or ~14 lbs of water. Added to my maybe 17 lbs of gear, and ~3 lbs of food, I was carrying over 34 lbs. It's rare I get over ~36 lbs, so that's a pretty good test for me. My shoulders did get sore at the heaviest weight, but they were recovered by morning... no big deal. So, I think I don't need a hipbelt.