By my reckoning this pack is about 3 years old. And to be clear I have put it through the ringer. Around June or so the zipper failed on one side, it's been getting sketchier and sketchier. Sometime in August I realized how bad the seems were and restitched several of them to keep the pack together long enough for some SAR work. I'm finally retiring the pack today. 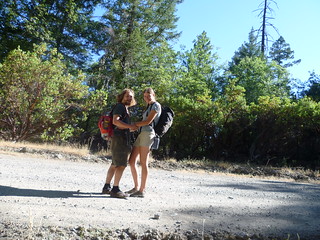 Jess has a Granite Gear Meridian Ki which she adores. so much that I actually bought the men's version and used it for a bit before needing to get rid of all my gear. Those packs are for another review though. Granite Gear got their start with A.T. through-hiking packs. They several one of only a few models of pack under 3 lbs that will last the entire length of the trail. The numbers are increasing elsewhere, but ULA and Granite gear were the first really good packs of their ilk. The founders have shown up every year at "trail-days" a backpacking festival on the A.T. and repaired through-hiker's gear for free (any gear, not just theirs). As a result they understand failure modes better than most.

This pack doesn't quite live up to Granite Gear's deserved reputation for robust gear. It's more solid than most packs. In particular the slightly odd shaping of the pack and zippered opening put less stress on the zipper than most designs would, that said... it has a zipper which is virtually always an issue. The fabric is entirely reasonable for this weight of pack, but repeated overstuffing does eventually tear out the seams. I can't really ask *more* from a pack in the price-range and it met my needs for absolutely constant use for 3 years and all the abuse that entails. For most people this would be a life-time backpack. But it's certainly not perfect either and a more robust pack would be nice.

At 25 liters this pack is an incredibly useful size. It carries well massively underloaded which is a very important feature in my book. As a result I carried with everything from a laptop and power-cord, or lunch a rain-coat and a water-bottle, all the way up to a minimal bivy shelter, wood-stove, food for 3 days, warm-coat, etc. on a trip in Lassen. That said, my conclusion is that for my use-case 30 Litres would fit the bill better. At 25L I often overstuff the pack for travelling, as a SAR 24 hour pack, or as a weekend backpacking pack. The extra 5 litres would give me the space to fit that extra bit of food or a minimal shelter into the pack easily. 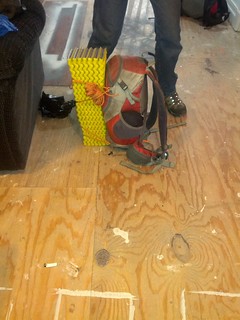 (Prepping for our impromptu trip in PA a couple weeks ago)

This pack *looks* totally typical, but the shape is odder than it looks at first glance. Note how the zippered panel goes 2/3's of the way down. It almost looks like it goes to an outer compartment and not the primary one. This, actually, is a really good feature. You can pack really tightly and the stress ends up on the fabric rather than the zipper. You can also get WAY more in the pack than it looks like, that front "bump" gives a huge amount of extra space. It took me a bit to realize it, but basically after the pack *seems* full you can still easilly get a pair of jeans, a shirt, and probably a snack in there. This is part of why the pack carries so well empty, that space slacks out easily leaving some tension in the rest of the pack to help it hold it's shape and keep stuff from shifting. This is especially nice while jogging.

I purchased this pack due to external water bottle pockets, a *real* hip-belt with pockets on it, and minimal other pockets in the pack. The hip-belt pockets are wonderful and amazingly didn't wear-through (in contrast to my ULA Circuit). I usually keep a sighting compass, a salt crystal, a headlamp, maybe a sparker, and often iodine in the pockets. This stuff just stays there all the time basically regardless of what I do, and it's always handy while walking or hiking. Having a broad belt is also really nice, when the pack is optimally full, meaning about 3/4 the belt will actually take quite a bit of the load. It's not critical, but definitely nice for long walks. For running a decently wide belt IS critical. The back panel is a thin foam with bumps covered with mesh. This is pretty good. I did tear the mesh some in the time I owned the pack, but in general it rarely caused a problem. It probably helped a bit with getting air to my back, but I'm not actually sure as that's not something I worry about very often. Oh, the mesh over the padding on shoulders kindof frays out a tiny bit, and the mesh itself chafes somewhat, such that if you want to wear it without a shirt, and your shoulders aren't thick-skinned it can be kindof unpleasent.

I don't use water-bladders myself, so this is critical for me. Also, it's nice to have occasionally to stuff a coat into. They aren't quite tall/deep enough. When the pack is empty they carry water bottles very very nicely. When the pack is overstuffed though the bottles get pushed out sometimes, which can be annoying when you have to chase it down the mountain on a rocky scramble.

This pack has some tiny little stretchy draws intended for an ice-axe. They are very light while in fact amazingly working quite well for a real ice-axe (I've done this a few times). My only warning though is watch the back of your head, depending how the pack is loaded you may have the spike at the butt end of your axe disturbingly close to the back of your head. The attachment points work for tons of other things though, and you can pull the stretchy bit off and just throw something else through the nice little webbing loops. Particularly nice is that an ice-axe or hiking poles strapped vertically too the pack do not have to take up the water-bottle pocket and neither do they block entrance via the front lid.

It's a good pack, and for someone with similar criteria to me I'd recommend it. That said it's still on the market I'm not going to get another one. I've decided I'd prefer to move towards canvas and leather. For me a pack like this wears out quite quickly so it's a bunch of plastic to throw in a landfill every 3 years. Canvas or leather is biodegradable and also a lot more repairable. Additionally I've decided my backpacks should not have zippers, particularly for main compartments. Zippers are just to unreliable and hard to repair for my taste. A draw-string is easily field repairable given a knife, a stick, and some fiber, so is most the rest of the pack for that matter particularly if you add a needle to the mix, and a zipper just isn't. After a few attempts to find a pack I decided to build my own, that article should hopefully be coming soon.
(If you decide to get one, please use this link and it will help fund our blog... thanks!)