Truck: New springs and a winch

This was written quite a while ago, and I just found it among my drafts.
It looks like a somewhat interesting post from around December last year.
Anyway, here it is

During the holidays at my parent's house, we wanted to get the truck back in to adventure shape. A mechanic in Colorado told us that our rear springs were "tweaked", probably due to the rollover. As a result our rear axle was actually crooked on the truck, he compensated to make the truck drivable, but noted that we should probably get it fixed.

I've also been wanting a winch for the truck since I first got it. Since the plan was to head back out west and, among other things, do some skiing, I knew I was likely to need it, so I finally sprung for a winch and the bumper to mount it to.

Our old springs were from All-Pro, and were doing *okay*, but drooping a bit and not handling the weight as well as I would've liked, so I decided to go old-man-emu this time, an Australian brand known for good robust overland setups. I found some from Wheeler's offroad. These springs have "overloads" which help keep the spring from bottoming out when carrying a lot of weight. Cool. I also got an exhaust bracket and rear brake proportioning valve relocater. I also got an extra leaf added to the pack for handling the extra weight better without hitting those overloads.

I also ordered a trail gear tube bumper (the lightest/cheapest bumper I could find that'd take the winch) and a 9500 lb rated superwinch winch from Amazon.

Wellll, we ran in to some issues. First, the 3'rd party seller selling through amazon forgot to ship the front-crossmember component that the bumper bolted to. Luckily based on photos dad mailed me I caught this and a new one was mailed. No big deal.

Finally I got to my parent's place, and we had some warm clear weather to install the springs. I jacked up the truck, got things prepped unpackaged them and found this: 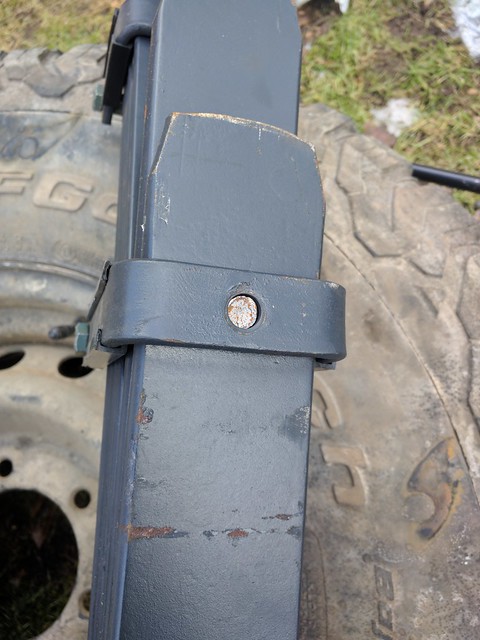 Whereas, here's what the other, not broken spring looked like: 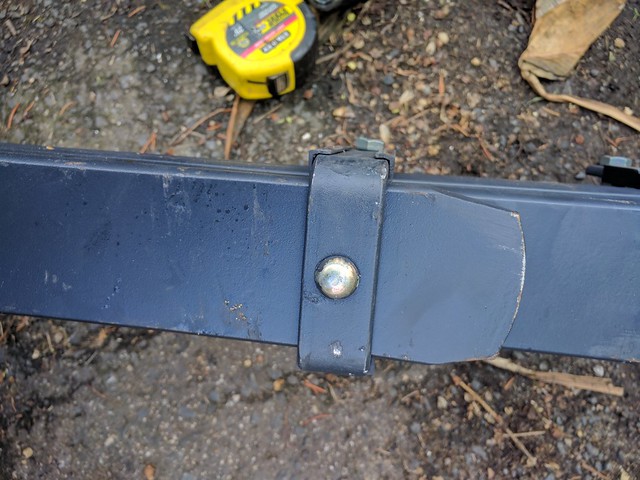 Wheelers was out of the add-a-leaf springs, so after some dancing about we decided for them to send a new spring without the add-a-leaf, and I would disassemble the leaf pack they had sent and move the leaf over to the new one.

All of this went fine and really wasn't that big of a deal... except TIME was passing. We had some heavy snowfall, and were in a period of record-breakingly low temperatures (literally). I used my mom's greenhouse (an insulated room my parent's built in to the barn), turning on the heat, so I could paint the bumper and crossmember parts. Time was passing, it was still cold, and I needed to get moving I decided I had to get something done, so I started the winch install *anyway*.

On a day where 10F was the high, I pulled just the nose of the truck in to the garage on the side of my parent's barn, and went at it. The rest of the truck doesn't fit, it's too tall. I started taking the truck apart. Turns out that while the front crossmember on the 2001+ tacomas is bolted on, it's welded on the 2000, so after some freaking out about whether I was really getting things right, using a grinder I picked up at home-depot I cut it off. After a couple of attempts, and grinding a bevel on to the frame ends to help out a little, I managed to hammer the cross-member on. What really amazed me is that it bolted right up.

The rest of the winch install went basically without incident... and here's the result: 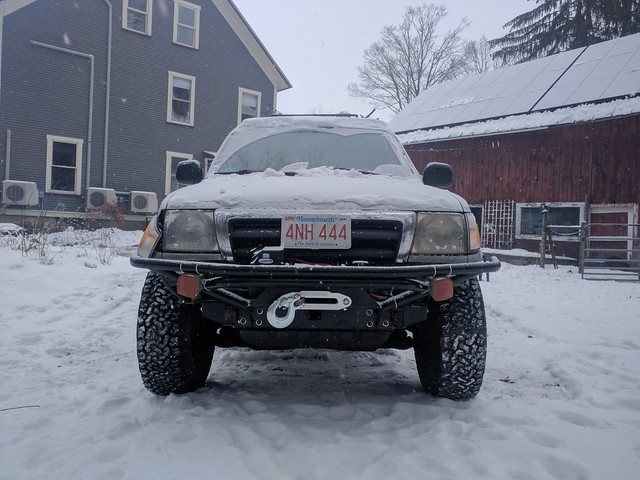 Once I had the winch and bumper installed, there's the question of the blinkers. I had originally planned to relocate them *inside* the side-marker light. In pulling the side marker light off I broke the tab that holds it in place (partly because the bracket on my truck that it mounts to is a bit screwed up from before I got it). Anyway, after looking at it I decided I didn't like that option. #1 if you use the stock light and drill a new hole for it in the side-marker, the bulb ends up too close to the plastic and some people have seen bubbling/melting. #2 if you use a 2-channel socket (1157 if I recall), then the whole mounting is based on some screws running in to bondo... ick.

So, I came up with what's pictured above. With a suggestion from Angie of how to locate them, I drilled some of the plastic flanges on the original signal lights (now removed from the bumper) and using these holes ziptied them to my new bumper... worked like a charm, and even looks pretty good.

The license plate had to go somewhere, so I did this... but I didn't like it. After much agonizing I ordered a reciever mounted license plate bracket, (and a new side-marker light) resulting in this: 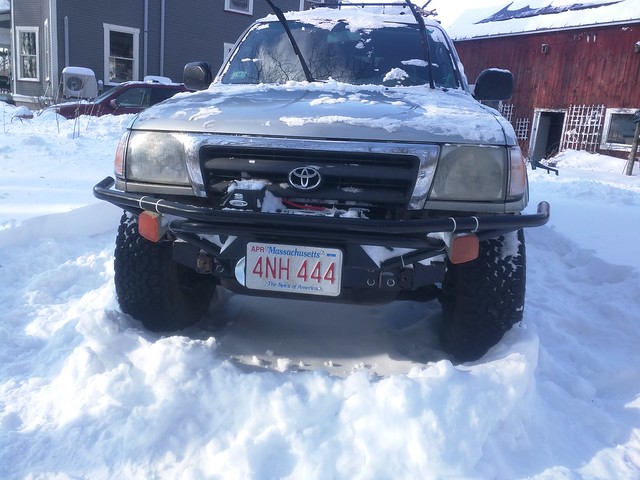 Much better! By now the springs were in, but I had to wait until there was a day where it was at least above 0F most of the day, because I didn't grow up in Alaska.

Happily, when it did, the springs went on no trouble. A little hammering, some grease etc. The only tricky part was pushing the new bushings on, which I did with a large C-clamp and some spacers (sockets and a block of wood with a hole I drilled in it). Then I just readjusted the front until I liked the match, and got an alignment. YAAAY!

Until... Shortly after hitting the road we were visiting our friend's place in Missouri and this happened: 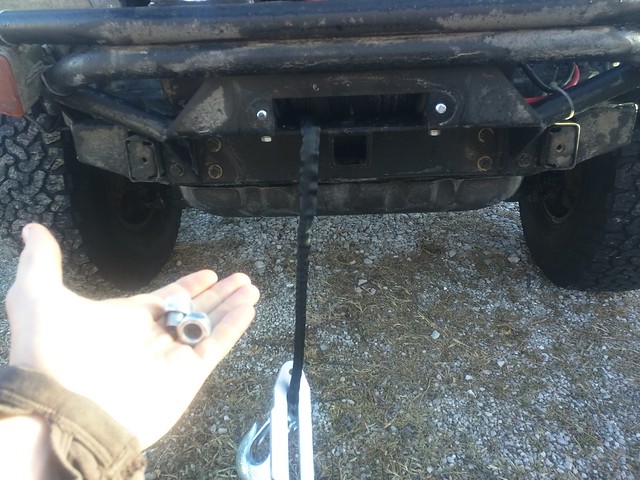 I went to fiddle a bit with the winch, make sure everything was working, and as I was pulling the license plate off, the bolts holding the fairlead on *sheared*. These were hand tightened with a normal socket wrench, these HUGE bolts, there is no load on them, and I had yet to use the winch or even wheel the truck. GAH.

No big deal, one trip to Lowes and we had it fixed, but... seriously? Ugh.

Anyway, I like the final result. Truck is handling well and driving straight, always a good thing. Here's a few pics now that it's done: 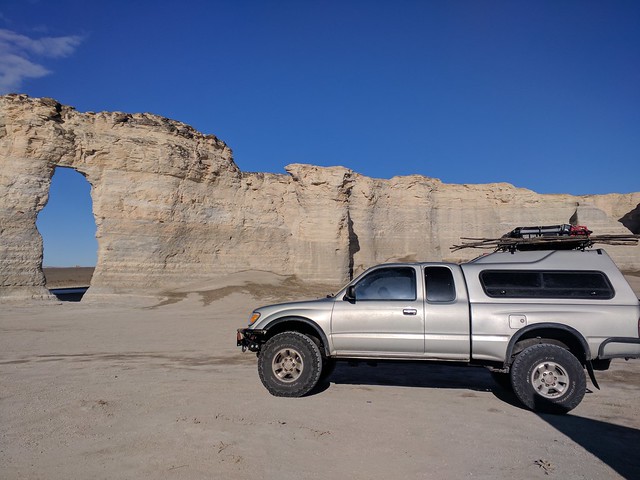 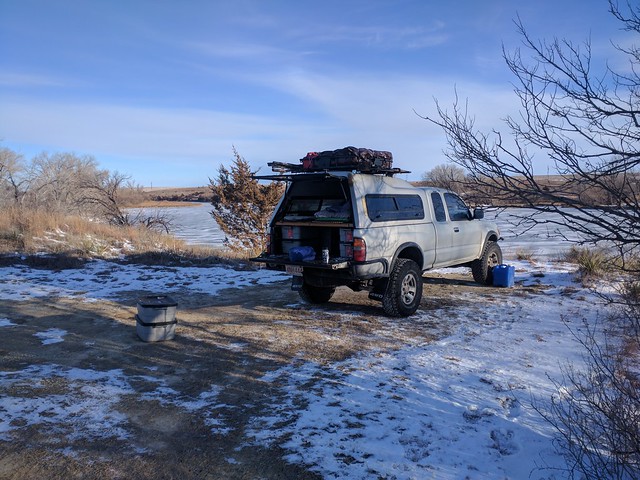 Update since this article was originally written (but still before it was ever posted). Just today, before posting this, I actually used the winch today to pull our Subaru out of a ditch. Angie was trying to be polite and let another car pass easily on a narrow road in the park in town. She went just a little too far and the snow pulled her in to the ditch. I ran down and got the truck, one quick winch pull and she was out, no problem.