Here's a new pot-stand I made for car-camping. My old one (the one I used on the AT) was getting pretty janky, so I finally made a new one. It's just coat-hanger and trap-wire. 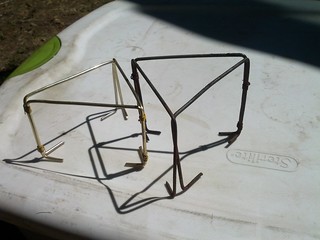 I was swimming in a nice swimming hole. A few other folks were there, when I went back to my truck there was a nice girl in her car who offered me grapes and apples that she had just picked. What an awesome breakfast! 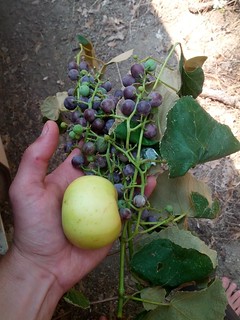 Actually, the day prior to this a guy randomly gave me a CD of 60's music at a gas-station, it's a mix CD, good music. People are so cool

A few repairs to my knife-sheeth. I also stuck a button compass on it as I'm often out with nothing but my inhaler and the knife - and sometimes it's overcast and it gets hard to tell direction. It's nice to have the backup. Note that the button-hole is actually braided into the twine, this is MUCH easier to get open and closed than the old design. 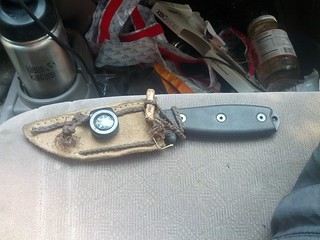 My old backpack is on it's last legs. I have plans to replace it, but it needs to last me a *little* bit longer first, in particular for some SAR activities in yosemite this weekend. So, I reinforced the seems that are tearing out. This is an Granit Gear Serrano. It's 25 liters and my general workhorse pack. It went to work with me every day for about 2 years, it's done a number of heavy bushwhacking trips and been ludicrously overpacked several times. A great pack that's seen better days. My next little pack will almost certainly be canvas so it can take the beating better. 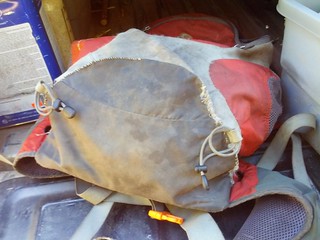 I suddenly had an idea a couple nights ago. I made curtains for each of the rear windows, they have velcro to stick to the inside of the cap. The velcro keeps sticking to random stuff, and they were just floating around loose in the truck. It suddenly occured to me that a little cargo-net to store them would be really cool! I learned netting a while back http://www.blog.smalladventures.net/2012/12/netting.html , but I'd never had a use for it. So, I sat down one evening and made a net, then sewed it to some velcro. This net makes me WAY happier than it should. It's so nice to make your home a bit more homely and well organized. 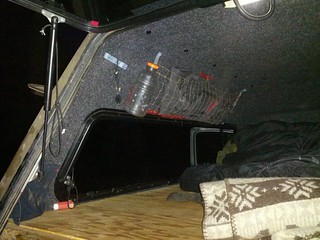 On a similar note here's a tiny pocket I made myself to store my inhalers and headlamp in the back. They kept rolling around and weren't easy to grab when I wanted them. 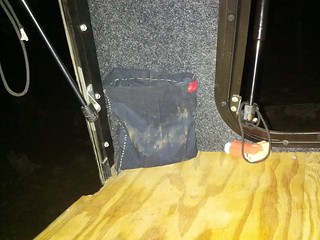 Lastly, here's a picture of a toad I found while going to the bathroom in the middle of the night. It scared me since it made snakelike noises when it moved. This guy is a little bigger than my fist (and no my hands are not small). 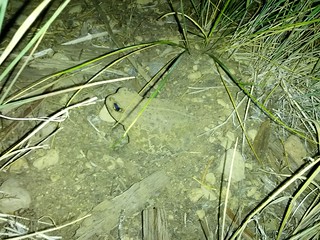