A while back Angie and I we're talking about what gear we wanted for living in the truck, and we got in to cooking gear. Last time I used an aluminum dutch oven, which worked pretty well, but it's a little small for two. Also, Angie gets a little anemic sometimes and was really enjoying the dietary Iron she's been getting from cooking in cast iron all the time. So, we decided what we really wanted was a 5 quart cast iron dutch oven.

Angie let a friend know and not long after that friend contacted her with a photo of this pot she found at an auction for ~$25.0 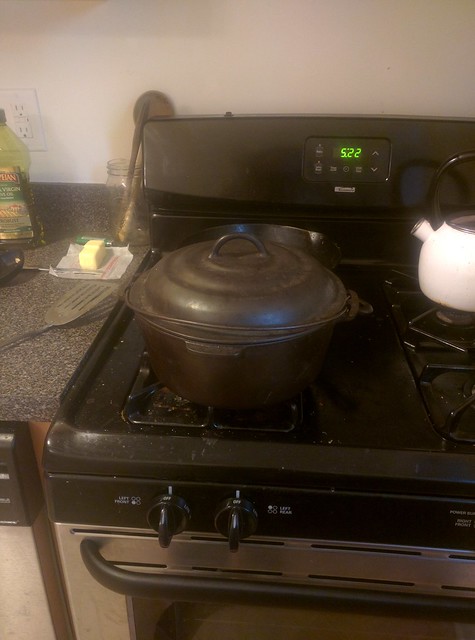 I couldn't believe it. It's an old Wagner... really old. It's light, and in basically perfect condition, and we've been using it as our primary pot since Angie got it.

Strictly speaking it's not a dutch-oven, since it lacks the flat lid with the lip on the edge, but it's plenty good enough and works very well for what we need. Even better than that, it's stable when you hang it from the bail, even when completely full of water, so it can used for cooking on a tripod. That's really rare in a cast-iron pot, and extremely useful. The antique ones are also far lighter than modern cast-iron, and smoother as well, making them really superior in every way for actually cooking in. I'd expected anything this good would've been way out of our price-range. 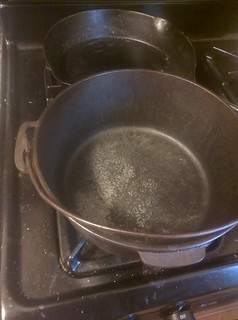 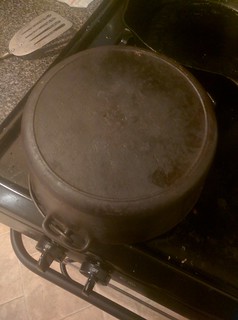 We're also bringing my antique cast iron pan, as well as 2 old aluminum backpacking/camping pots. My dad got the smaller one when he was in college, already used, and found the older one later, so those act as soup-pots for things like oatmeal.

We've been using this set of dishes for a while, since well before we hit the road (since we'd already gotten rid of the rest of our pots), and find it to be more than sufficient for virtually everything we cook. Notice the metal spatula in the first picture... I learned the hard way that this is key to using cast-iron as you can keep things from sticking with this far better than a plastic or wooden spatula.

If you don't know the secret to dutch ovens, the neat thing is not only can this be used as a pot, and a frying pan, it can also be used like an oven. If you bury it in coals you can bake bread, pizza, finish pancake, or virtually anything else.