We had a jug of maple syrup I bought from Samuel Thayer last year (the noted Herbalist, that's another story). Well, we finally used enough of it (Jess has some of it too) that I could dump the remainder into a different jar, and yay, we had a jug!

Well, I was a bit worried about carrying a glass jug around, what if it hits something and cracks or shatters? Several years ago I saw someone getting water from a spring using large jugs that had been covered in basketry done probably from willow, and I thought gee... that's a cool solution.

Last week we were out on a hike and walking down the road to a trailhead. A farmer in a flatbed pickup (with 2 round bails on it) stopped to chat and tell us he was impressed that we'd stayed out through all the rain. He was sweet and we talked a bit about his scouting career and local news. The next day he stopped by our camp and handed us a pile of jute bailing twine (stuff he probably cut off his hay-bails) to use a tinder.

Well, we didn't really need it, and I came up with another use: 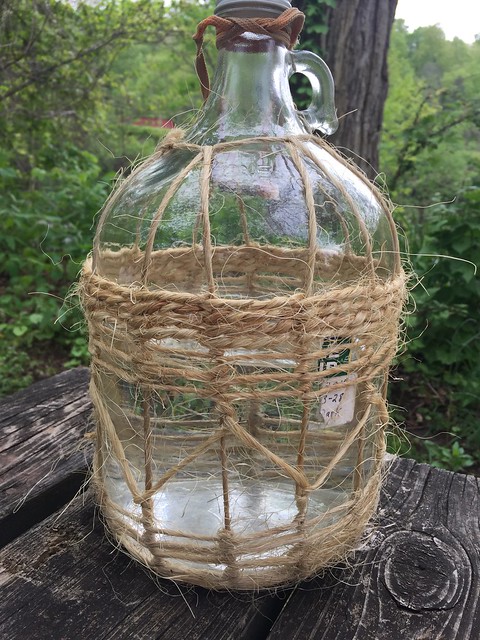 I was having fun and got kind of artistic... by which I really mean lazy. The bottom is started more like a classic basket, then goes to a twined basket as the spokes get too far apart. I was making the whole thing up as I went along... so it's not the prettiest, but I still thought it was kind of cool. 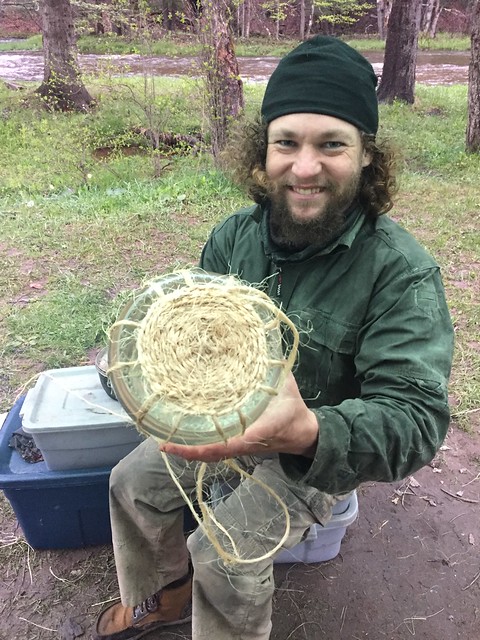 Note that if I did this again I'd use more of a knotted net method (diamonds)... I realized that would probably be a lot faster and easier, but trying basketry with bailing twine was fun. It brought back memories of my childhood when the default twine that was always available for a kid to do stupid things with was bailing twine.

We finally retired my trusty old plastic Hi-C jug that I've been using for several years. The handle stuck on the top of this jug in the first photo is actually one I made out of need for that jug in 2013 or so.