Canning over a fire

Now that Jess and I are finally settled in a place again we're starting to get into the rhythm of working on projects.

Jess through a housewarming party, and a farmer friend brought us some spare produce, mostly tomatoes and cucumbers. So we decided to can them.

Jess picked up a nice canning pot, but when we tried to use it we realized it didn't work on our stove, because our stove is electric glass top. The air-gap between the pot and the stove was way too large, so the water never boiled.

Our next thought was to use the propane camping stove. We canned a few jars of pickles on the propane stove, and it worked great... except that we used most of a canister of propane! That makes for expensive pickles!

After much consideration we realized that we could just do it over a fire, so we got to work. I gathered firewood and built a tripod while jess finished the preperatory steps, built a fire-circle, and attached a wire to the handles of the pot as a bail. 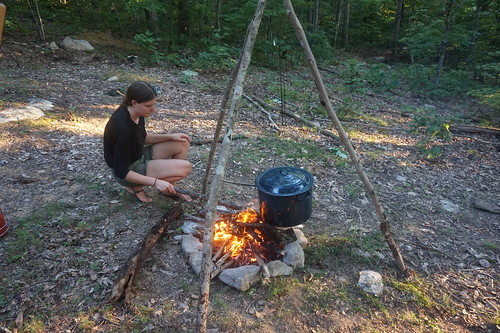 Most of the forest around us is oak, so we didn't have too much trouble getting a good fire going (cheating with a lighter). Two evenings of canning and we had canned this: 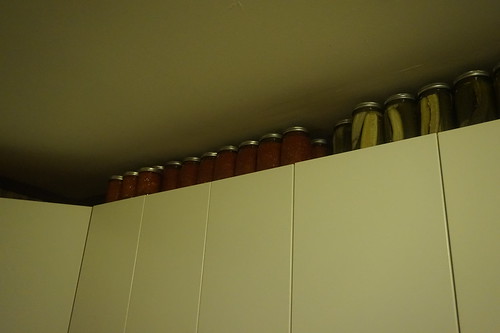 Today I opened one of the jars of pickles... Crunchy and delicious! The recipe we used was hotpack with a bit of mustard in it, and a nice balance of garlic and dill.