I know I haven't posted in a while. I'm in transition right now, with a lot fewer opportunities to get out and do neat things outside. I moved out of my cool house in the woods because I didn't want to sign the lease for another year, so I'm temporarily living in an apartment in Waynesboro VA while I look for an awesome place to live. I did get a good test of my trailer on the move, and I found that I really like it.

Although I haven't been getting out as much as before that's not to say that I haven't been doing anything. I'm dating a wonderful girl. The two of us went backpacking last weekend, and covered a LOT of mileage. I estimate at least 18 miles saturday and again on Sunday, and another at least 12 on Monday. We didn't bring a camera though so no post is coming. I'm also planning a blitz of the Massanutten trail for weekend after this one, it'll be interesting to see how that goes.

A couple of weeks ago I helped a friend who owns a small meat farm slaughter and butcher a bunch of chickens. That was pretty interesting. This is a very small family operation and we of course did it as quickly and humanely as possible. Butchering any animal for sale was new to me, and it was interesting to learn what people care about.

Moving into a new place is always a bit of an adventure. There's all sorts of little things you need. I needed a shower curtain but just couldn't stand the idea of getting a plastic one. But I had part of a cheap canvas drop-cloth I bought a while ago for my MYOG backpack experiments. So, we hemmed it while watching a movie and hung it up with some rings from home-depot. 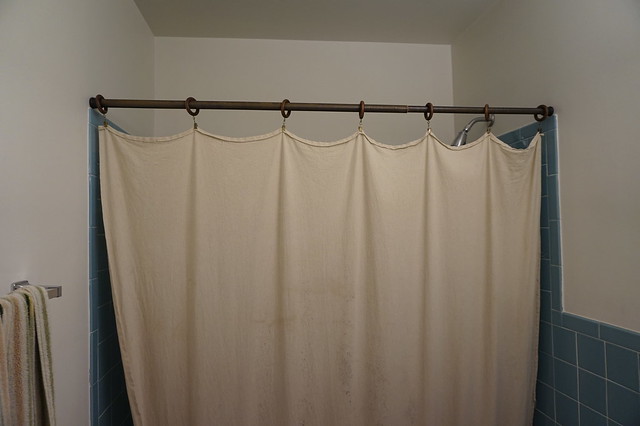 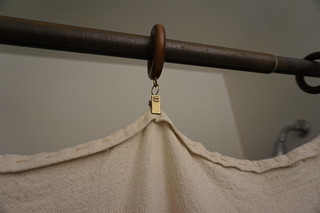 The rings cost cost ~$8.00. A plastic shower curtain would be cheap, but this makes me so much happier. And when I throw it away it'll actually decompose.

I also wanted some large S-hooks due to how the closet here is set up. S-hooks this large were ~$3.00 each at home-depot. That's just too silly. So I picked up a coil of wire instead. I then drilled a hole in a dowel I'd purchased as a curtain rod. Sticking the wire in the hole in the dowel I rolled the dowel along the floor (this is actually a lot of effort with wire this thick), using the dowel as a mandrill to make rings. I learned this trick originally from Lizza, who taught me how to make chainmail. Hat-tip to Jess for suggesting drilling the hole. 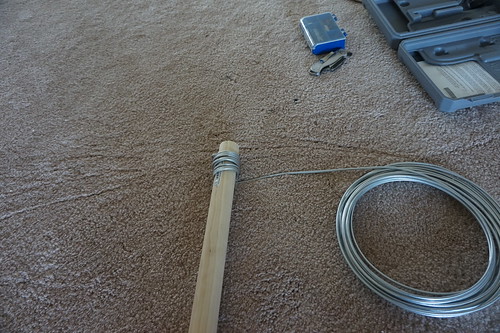 I tried using nippers and sadly put a giant dent in the jaws of my nippers. Damn, Luckily I got them for ~$3.00 at a garage sale or I'd be more upset. So I broke out the dremel and used the cutting wheel instead. Once I had the "spring" free I then used plyers to open up the last coil on the spring into an S-hook. Then used the cutting wheel to cut it off the the Spring. Repeat. I found it easiest to do about 6 at a time, just because the spring was an easy to work with size that way. The wire was ~$10.00 for the roll, and I've used a tiny portion of it. Though I probably used up another dollar or two worth of dremel cutting wheel. 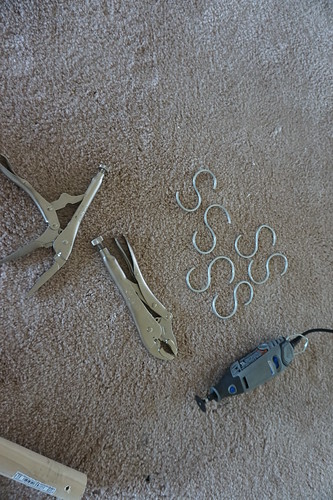 So, life is moving along. Always learning and playing. I hope to report some good outdoor adventures in the not too distance future!