I just got back from a four day backpacking trip with my parents. We were playing with a lot of new gear this trip, and had a few difficulties as you usually do.

I had a new sawyer squeeze mini, and my dad had gotten a new platypus gravityworks system, and then substituted in a rapid-pure filter. This did not work well as it turned out, but for hilarious reasons. 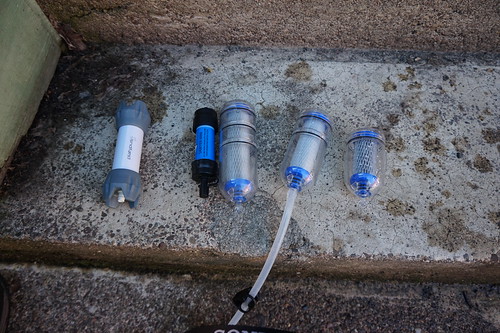 Let me back up a bit and talk about some of these newer filter technologies. For years there have been 2 primary filter types, carbon and ceramic. Carbon filters have short lifespans and don't remove viruses, but they are cheap and relatively robust. Ceramic filters are fragile, often require a bit more pressure, but are quite sensitive to being dropped.

More recently the technology used in dialysis machines has made it in to water filters. The first major production filter to incorporate this was the MSR hyperflow. It got great reviews initially, but was generally a disaster. Requiring back-flushing every couple of gallons it just wasn't usable. The pressures required to push the water through caused problems for the seals, and in general they screwed up on the valve designs. Everyone I knew who had one was plagued with problems.

A bit later the sawyer squeeze came out from an independent company. This filter using the same tech took the ultralight community by storm. It's simplicity of being *just* the filter unit with no pump complexity made it lightweight, and tempting for minimalists. You could put it inline in your drinking system, or squeeze through it using a bag. It mostly works, but the pressures occasionally cause the bags to bust... annoying, but not deadly. You still have to backflush all the time though. The mini is just a newer miniature version of this filter with a little bit slower filter rate. I picked one up after my polar-pure bottle (purchased in 2009, and chipped the same year) finally shattered on the kitchen floor while prepping for a recent trip. This was it's second trip actually, so I've filtered maybe 4-6 gallons with it now... and it's annoyingly slow.

My dad is a bit of a gear-head, and found out about a newer technology. Instead of being based on super-tiny tubes, it uses more of a mesh. It's still small enough to remove viruses and such, but due to the mesh shape supposedly achieves a better flow rate. Dad's idea was to use the platypus gravity-works filter system, which includes all the bags and hoses in a nice configuration he didn't have to figure out himself, and then swap in a faster filter. Sounds good in theory.

But: ALWAYS TEST YOUR GEAR

On our trip, water barely flowed through his filter. He could filter 3 liters overnight after half an hour of fiddling to remove all the air-bubbles. My sawyer squeeze was too annoying to use to filter everyones water, but the combination got us by. In retrospect we should've hooked his system through my filter, but at the time we didn't think the pressure would be enough... it didn't work with his super-high-flow rate one after all, why would it work with mine?

Well, today we decided to test it. He hooked up his system and water just didn't flow. We hooked up the sawyer and it dribbled, like okay... this is annoying and not really usable but kinda what you'd expect. It certainly implies that his is somehow faulty though. Dad had read reviews (on Backpacking Light) that were VERY detailed, so it all just didn't make sense. So, we hooked up the smallest of his 3 filters from rapid-pure, and a STREAM of water shot out! Wait... what??!!! 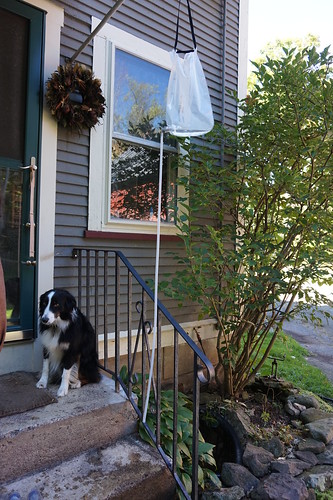 Next we hooked up the mid-sized one, it was even faster. We timed both, the small one is just under 1 liter a minute, the medium is more like 1.1. We didn't get the 1.2 and 1.6 they advertise, but it was fast, and we may not have hit the requisite PSI for the advertised rate. In any case, it's way faster than dad's old sweet-water pump! In fact, it's the fastest backpacking filter I've ever seen.

Finally we hooked up the original gravity-works filter, it absolutely shot out of the far end as I hooked it up, so much dad jumped out of the way. We timed it at over 2 liters a minute. We're not sure what tech this filter uses, but whatever it is it seems to be more fragile. It's possible it clogs faster or something than the newer tech, we don't know, it'd probably be interesting to try both for a while and see how they last in practice.

These filters are starting to peak my interest a bit more now. I decided on this trip that the squeeze isn't really worth it. It's too slow and annoying. The first half-cup comes out okay when I set on a 2 liter bottle, but it's just annoying to use. It doesn't take forever, but it's too slow for my liking. It's not that I'm in a rush, but I don't want to spend all my time filtering water. I like to spend it wandering, starting fires, building shelters etc. In fact, I think I drank less than I needed sometimes because getting water was annoying.

The squeeze mini though threads directly on to a standard soda bottle, which for me is a big deal since I use standard soda bottles and stainless steel bottles to the exclusion of all else these days. The day one of these faster ones comes in a form-factor that's that simple, so i can use it on top of a bottle, or as an inline filter, or as a squeeze filter, I might finally switch off iodine. Maybe I can fashion something myself. In the meantime, I recently found more polar-pure on Amazon. Jess and I purchased 5 bottles of it in fact, since we're not sure we'll ever find it again. My last bottle lasted me 5 years before I broke it, so I should be set until these filters come in the form-factor I want. BTW, If you want polar-pure, I'd get on that fast.

For those who are okay with a little bulk, complexity, and fragility of bladders though the future is now. These things are impressive. I might get something similar to store in my car and use when car-camping, where these things matter less to me.

My dad called the company he bought the filter through, and they contacted the manufacturer. The manufacturer asked for the filter back so they could understand the problem, and sent 2 replacement filters as thanks.

When they got it back they tested it and found that indeed it is faulty and appears to be a manufacturing defect, and they're looking at how to improve their processes. So far this is the only incident I'm aware of of this kind.

After a little usage I gave up gravity filters again. I just can't keep them from clogging for long enough. They are fine for a week or weekend, but for long-term use they just don't cut the mustard. I've gone back to not treating water at all, or using polar pure iodine.