I finally got a chance to work out the snowshoes I've had on the roof of the truck for the last year. 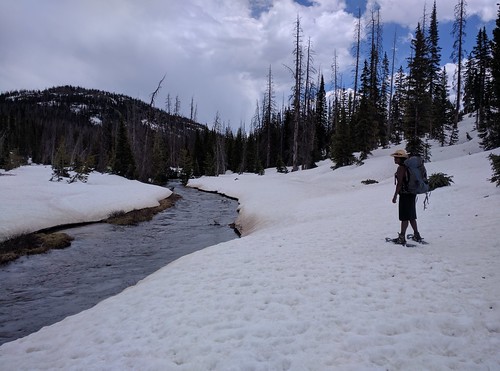 Angie and I wanted to go backpacking for 4 or 5 days. We were up near Steamboat Springs CO, visiting Angie's friend. We knew there was still snow at higher elevations, and didn't know where a good loop was, so we swung by the Forest Service office to ask. The lady we talked to there said the nearest/best spot was the Zerkel wilderness, but that there was was no-where to do a trip of that length without hitting snow. Undaunted we left in a search for snowshoes. Stopping at Ski Haus nearby and bought Angie a pair of used rental snowshoes, then returned and picked up the map the lady had recommended.

I'd snowshoed before, but Angie never had, so we really didn't know how far we'd get. Given that we packed our gear and 5 days of food with the attitude that it could last anywhere from 2 to 5 days, and we could cover anything from 5 to 20 miles per day... just keeping it loose. 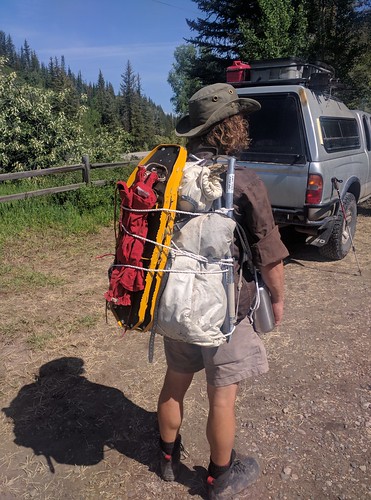 (Leaving the truck in beautiful weather... Later I moved the bearbag to the bottom, when food got lighter)
Sleeping: 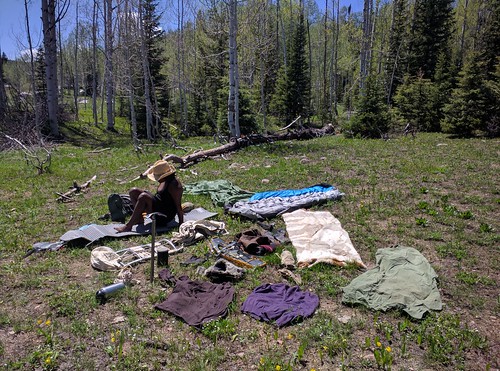 (Drying our gear out on the afternoon of day 3)

I carried my bottle on one of the ropes I used for the shelter. I used another one to tie my bearbag to the frame. Quick access items were in my pockets on belt pouch, with my belt knife worn on my hip. Everything else was folded up in the poncho envelope style, which was then tied to the frame using a diamond hitch.
I did NOT need the fur hat or gloves, a wool skullcap was more than needed. I also carried the second wool sweater "just in case", since I'd never used a sleep system like this in the snow.

I've been working on gear involving no synthetics for 3-season backpacking, but I've got a ways to go for 4 still, so you'll notice a mix here. The snowshoes, boots, hat, and gloves, are "extra" gear I had to throw in. The gators, uco lantern, and kleen kanteen are incomplete summer gear I haven't modified yet. And of course, I still need to replace the plastic plugs on the pack frame, and the silicone ring on the BOT cookpot/bottle.

That said... I was amazed how well this gear worked. I was generally quite comfortable. Had I put on the gators before postholing through snow I would've had dry boots, and would've been comfortable the whole time. I do have some work to do though, my groundcloth should be treated, and my tarp not, for example. 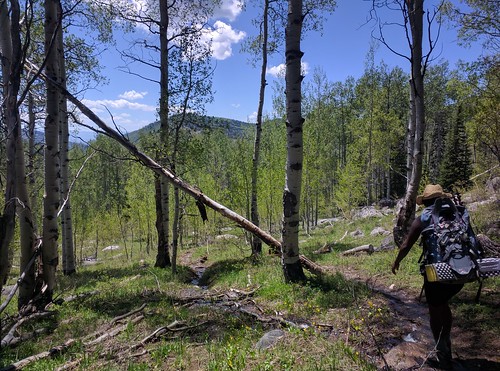 We felt pretty silly walking through gorgeous 60+F weather with snowshoes on our backs, and no snow in site, but everyone had told us we needed them, so we stuck to it.

It was absolutely gorgeous but pretty much uneventful for the bulk of the first day. We got a late start, had heavier packs than usual, and had no milage goals, so around 9 miles in we decided to stop at a river crossing.

As we were considering this though I realized we really wouldn't want to cross the snowmelt fed river early in the morning when it's still chilly, so we decided it was best to cross now and camp on the other side. 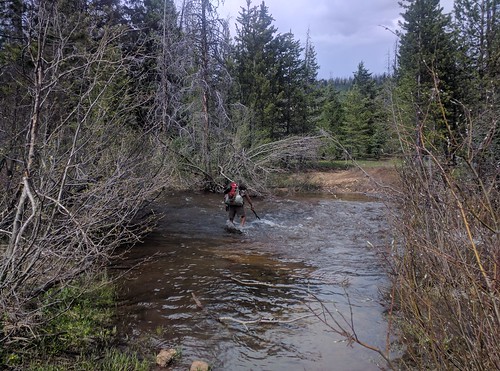 (Crossing the fast moving, deep, and cold first branch)
It was *COLD*. I usually do crossing barefoot, and I've done enough of them, I'm pretty used to the cold shock, but this was different. The current was also fairly strong, you can see me using a stick for balance in the above photo. The ford ended up being thigh-deep, and when I got to the other side of the first river I was in PAIN that caused me to pant pretty hard.

Next it was Angie's turn... I hadn't made much noise crossing, knowing it would be worse for her and not wanting to discourage her. She made it halfway across, but was slowing down further and further. Pain in your feet during crossings makes balancing on rocks harder, and she looked like she was going to topple in. I grabbed my stick and went back in to the river, walking upstream from her to create and eddy to make it easier we made it the rest of the way across. She was okay, but crying from the pain.

100 yards down the trail, we found another river. Shallower, but still not trivial. We crossed this. 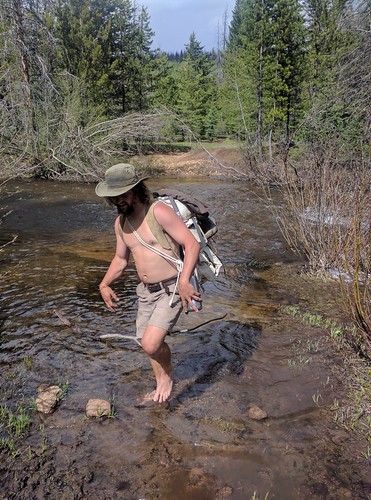 100 yards down the trail we found a *third* crossing. Again shallower, but again, not trivial. The snowmelt had caused the river to swell and fill extra streambeds to the side of the main river, streams that were probably normally barely a trickle. We realized this was why the crossing was here, far upstream from where we'd started, because here it was spread out enough to be crossable.

Day 2:
Day 2 started similar to day 1, but after a while, we started to hit lump of snow on the trail, and slowly but surely it changed to being mostly snow instead of mostly not snow. We started to have issues with losing the trail probably around 9500 feet, and kept a close eye on our compasses and map. We thought we lost the trail a couple of times, but kept finding again by going in the logical direction. Eventually we were on just snow and Angie suggested the snowshoes might make easier/safer walking.

(A creek we passed on the way to Lake Margaret, the trail crosses, but crosses back, so we just stayed on the left bank)
At this point we'd long since lost the exact trail and had been navigating by map and compass, with occasional use of cellphone-GPS to double check.

We traveled by Lake Margaret, down to Edward, and then Hawk lake. 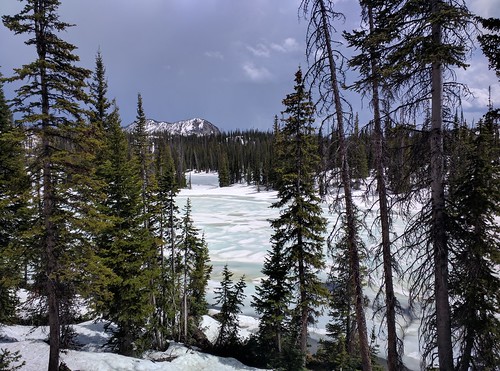 (Lake Edwards, I think)
We kept hearing a storm in the distance and it was sprinkling rain off and on, so we were hoping to get to lower elevation to get away from that, and maybe to find a non-snowy patch to pitch our tent. 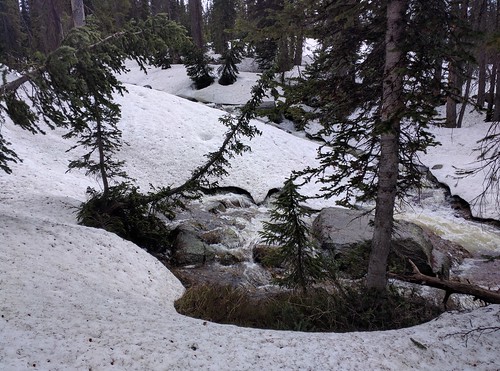 (Creek, or rather raging torrent, running from Lake Edwards to Hawk Lake)


Our guess was wrong and while there was a small clear spot by Hawk Lake, it was really muddy, and a small rise in the rushing creek would flood it. 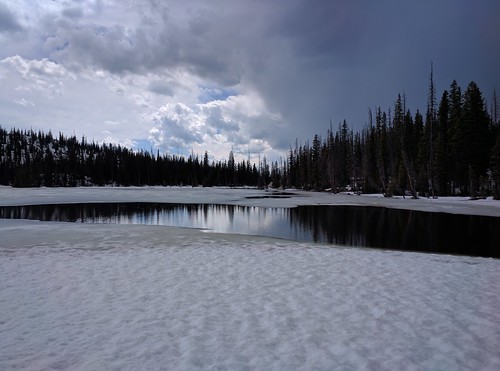 (Hawk Lake, a little lower elevation so not completely frozen over)
So we doubled back to a small spot we'd seen by Lake Edwards. Here Angie started a fire, while I came up with a bit of a hackjob shelter, combining her poncho and my poncho in to a single shelter pitched on a kind-of steep hill. One side was actually staked in to the snow, and I carved some snow away using my ice-axe to get it to fit. 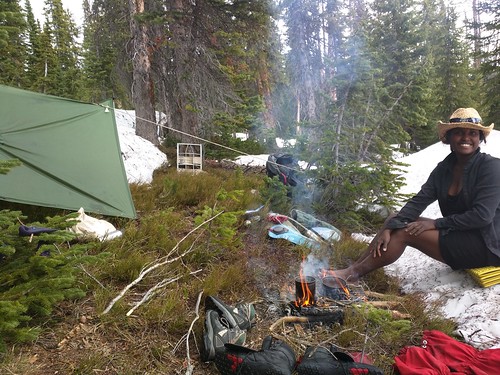 (Angie warming her feet in our tiny snowless campsite)
It rained off and on, so we didn't get a good chance to dry out our shoes, but at least we were able to take them off for a while and warm our toes by the fire. We cooked a nice dinner (I ate 2 boxes of mac n' cheese) and went to bed.

It was a bit of a rough night. There was a bad puddle under the tarp due to the snow melting. I used the ice-axe to dig a little channel to drain it, and that worked okay. I then used my canvas coat to cover the puddle underneath my groundcloth, and that kept me mostly dry. It dropped well below freezing during the night, so the puddle drained, the snow stopped melting and we woke up fairly dry in the morning. Not too shabby for a makeshift shelter... but I could really use a more waterproof groundcloth for winter trips. I'd figured I'd use the poncho under me for this sort of case, it didn't occur to me that it might rain while there was snow on the ground, lesson learned! 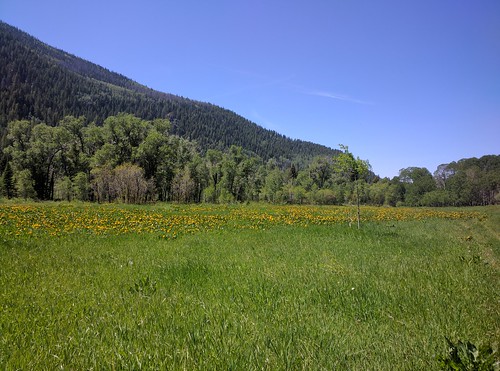 (field of wildflowers we passed on our return trip)
The trip back was pleasant and equally beautiful. We passed some fresh bear tracks in the snow in the morning (really fresh). The rivers felt a bit warmer when we crossed them this time, and Angie just crossed the worst one with her boots on. We camped in the sun and were able to dry out all of our gear, which was nice. We also saw a cow and a bull moose (seperately) who wandered right through our campsite.

On the last day we figured we'd take a longer route back, up through "mud park". When we got there though we judged it not worth doing. It was more worthy of a canoe trip than a backpacking trip. Angie and I have done terrain like this before, and while it's quite the experience, we didn't feel the need to repeat it. That said, it was beautiful to look at before turning around 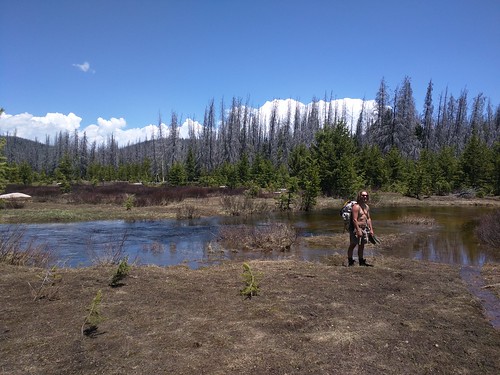 (Standing at the edge of Mud Park, before turning around) 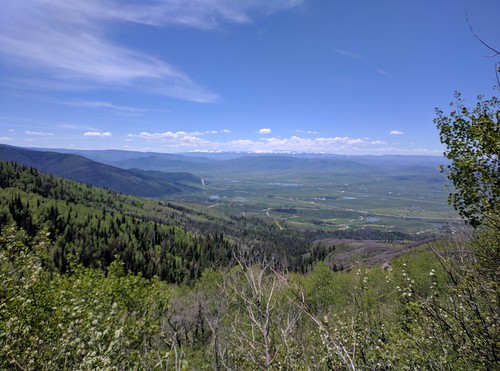 (A view of the valley as we headed back to civilization)