While at Wintercount, a traditional skills gathering, we met James who lives down in Tucson, and ended up staying with him for a week, then housesitting for him for a week.

Anyway, James is a certified diesel mechanic, and while chatting about stuff I mentioned that our clutch was pretty old, and he offered to help me swap it. I couldn't pass up the chance to tackle such a large project with a buddy who had at least some clue what he was doing. How else am I going to learn? Just doing things, trying things, etc. is exactly what this blog is about, so we dove right in.

First, we spent a day researching how to do it. We watched videos of people changing their clutches and dropping their transmissions on similar model years (2000 Tacoma). We read through the Factory Service Manual (which I downloaded some time ago, let me know if you need it I can point you in the right direction, I know it's hard to find these days). We layed out all our tools and parts, and then we started taking stuff apart.

The project took about 2 1/2 days with two people working. Here's a shot of the transmission finally removed from the truck. 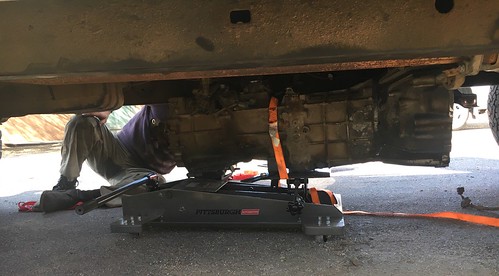 Having two brains helped enormously. If you've ever worked on a small passenger vehicle you know that the hardest part is *getting* to all the bolts and parts. James pulled some magic spinning the starter around and getting it to slide out... but having watched him I was able to remember steps of how to slide it in that he'd forgotten.

In the end though, it's mostly patience and just trying different things carefully and and slowly until something feels like it's really going to work. A lot of things didn't go perfectly, obviously. We tried to remove the front exhaust pipe (sometimes called the down pipe), and it just wouldn't come off. So much for following the book, but we realized if we fully removed the front driveshaft it probably didn't matter (and we lucked out, it didn't). Getting the driveshafts off took some ingenuity and we learned a lot. The back end plate we couldn't find for the longest time (it's on the front of the trans, below the engine block). When we finally did it was ridiculous to get off, and while getting it back on I realized it was trivial with the skidplate off... oops. We took several trips to NAPA (access to a second car was really helpful), and frequently what they supposedly had in stock wasn't really there, as a result we ended up getting the flywheel machined, rather than replacing it as I had intended. But... it all worked out. 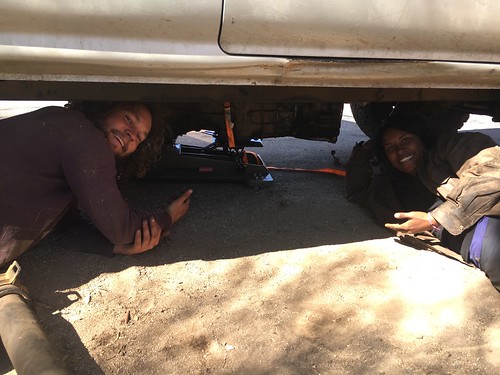 Angie helped actually pull the transmission and push it back in, adding a third set of arms and muscles.
Note the shot shown above the transmission is on a transmission jack. I bought that just for this project and I can't store it. Thing is, it was ~$175.00 a clutch swap in a shot runs ~$1200 or so, the bulk of that in labor. Buying a transmission jack made the job that much more sure to succeed so I was willing to tackle it, thus saving a ton of money. In particular it meant that when sliding the transmission back IN, we could adjust it fairly precisely (not perfectly, as the tcase put the whole thing a little off balance, but close). I could lift one end to tilt it, jack a little, tilt the plate, etc. to get it in to shape while James spotted.

This post isn't so much about the car work itself, as it is about the philosophy. James reminded me that just tackling stuff *works*. Thanks James! People are so afraid to do things, the modern world tells us we should just buy something to solve our problem or pay someone else to things for us, that somehow this will make us happy. But then we miss out on all those opportunities to learn. If you do your research and go at it carefully with patience, stuff usually works. In the rare case it doesn't you learn even more useful lessons. I find that doing things for myself also keeps me engaged in life, and thus happy.

After we got it all back together I had a check engine light. It took me about a day of testing with a voltmeter and reading online forums and the FSM to figure out that the O2 sensor wasn't reading properly, and then that it was due to the wiring. Turns out we'd pulled a wire out of the plug, so more research online on how to repair plugs, pull the wiring harness back out (about an hour of work), pop the pin, solder it back to the wire, reassemble everything, and the check engine light was fixed.

After this work I replaced my brake hoses and brake pads a job I'm not sure I would've taken on before doing this despite it being quite easy. I did all the fluids, fixed another broken sensor, and generally brought the truck back up to snuff.

After this experience I'm far more likely to tackle other car work. Doing projects like this builds on itself. I started by doing oil changes, then brake bleads, changing belts, swapping springs and shocks. But, it's not just car work. The skills for tackling big projects translate from one project to another, I don't only feel more confident in working on a car, I'm now much more seriously thinking about building our house someday.

The title of my blog was originally meant to enshrine this spirit. Every adventure is small because it builds on previous adventures. Then if you keep pushing your comfort level a little, trying something a little different, a little more complex, a more difficult season, a little less gear, pretty soon you'll be doing things you didn't think you ever could.

For anyone curious about actually doing this particular job, here's my tips.