Jeep: finally ready for the trail

The new tires and rims came in today, so I went and picked them up. Here's my rig: 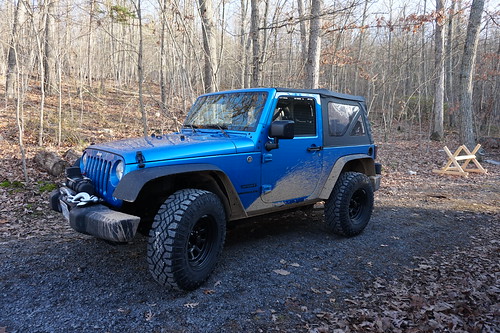 
Here's my two previous posts on the build:

I still need to do something about the front fender lights for inspection (I could just trim the fenders a bit more), but she's trail ready.

Since my last post I added the tire carrier and jack mount. It basically replaces the factory hinge with something longer that goes all the way to the tire. This is necessary because the stock hinges are too lightweight for heavy tires. My new tires might just barley be okay, but I needed to reinforce it if I wanted to ever use a spare-tire mount bike rack. The carrier went on exactly as the instructions described just bolted on, it hardly took me any time at all so I'll leave out the detail. Anyway, I went from this: 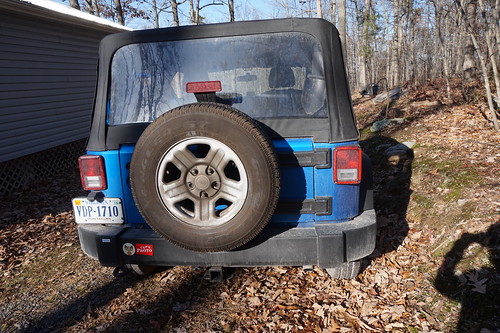 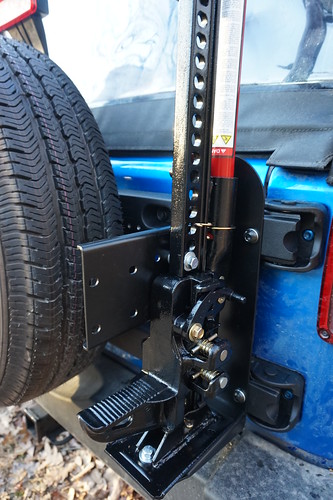 This also gives a place for the CB radio antenna I added next. I did some reading, and basically if you want to hang out with other folks at all, jeep clubs, etc. you need a CB radio. I always kindof wanted to really install one properly, so I did. The Jeep Wrangler is something of a rediculous vehicle inside, everything just pulls out, so I was able to route the antenna wire trivially, the only hard bit was fishing it through the tailgate, which I did with a little stiff wire, some tape, and little swearing. 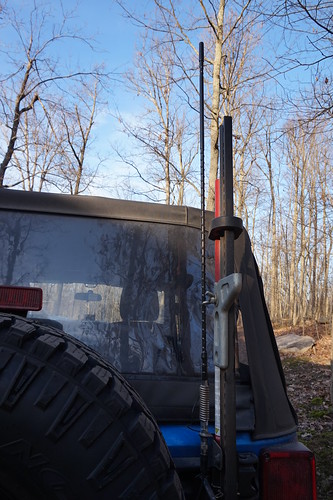 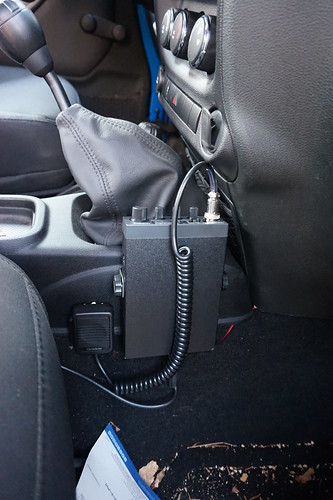 I have a habit of doing stupid things, and doing them alone. It's a miracle I never got Jane stuck (the Toyota Tacoma I sold to Jess). A Jeep Wrangler is just more encouragement to do stupid things. Given that I figured I really need a winch. Also, I was dragging trees with this Jeep before it hit 200 miles, and a winch makes a lot of that type of work easier and safer. General advice everyone says is around 2x to 3x the weight of your vehicle. My Jeep is ~3600 lbs (I know, modern cars are HEAVY), and that's before I weight it down with heavy tires and other junk. Given that I got a 9600 lb superwinch.

If you know about winches and ropes you'll know why I got a synthetic winch rope. Steel cable stretches significantly more than synthetic winch rope, and as a result can be extremely dangerous if it breaks, quite capable of killing people. Synthetic winch rope is so non-elastic that it will reportedly drop to the ground safely if it breaks. Additionally sharp kinks in it don't affect it much, and it doesn't rust. It does get damaged by UV over time of course, but oh well. Before the winch I've always kept 16000lb synthetic winch rope in my car, to use for vectored pull and the like (look it up if you are curious, you can move VERY heavy things with just a rope if you know what you are doing, and can capture your progress).

Anyway, THIS was the PITA project. To mount the winch plate

AAAANYWAY. I got it on, and it works, and it's pretty cool :D. 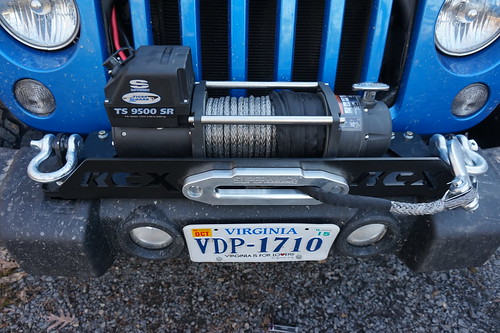 As it happened, on Saturday Jess and I were out hiking in George Washington National Forest. We had decided to go somewhere different, so we were a little ways in on some mostly pretty smooth dirt roads. It was only exciting at any point due to the ice patches, which I was sliding on a bit. In any case, on our way out we blew a tire on some dinky little rock stuck in the dirt. It tore a slash in the tread of my left rear tire, firing the TPMS sensor. I took a shot at patching it, but to no avail given how it tore. If you were in any doubt, the stock wrangler sport tires really are just crappy street tires, just ignore the M+S rating. Happily though, I already had my new tires on the way, ordered almost a week prior.

After much reading I found that 33" tires run really well on the JK. The rest of the components are generally up to snuff so you don't tend to break things too much. 35" tires lead quickly to a long list of modifications such as reinforcing the front Dana 30 axle and things like that. I'm not looking to build a monster here, just something that's a lot of fun on the trails, and at least as capable as Jane was.

I really wanted narrow tires or "pizza cutters". Narrow tires would keep my gas milage up. In shallow snow like VA tends to get they tend to punch through to the bottom giving better traction than wide tires do, similar for mud. They fail hard in bottomless mud and snow, but I figured that's okay.

As it turned out though, I couldn't get 33" pizza cutters (say 235/85R16) in the tread I wanted, that is something with lots of siping but an open almost mud tread. I was also searching for something around 8 ply, but these tires only come in 10 ply in this size, oh well. So, I gave up and got what I could in the tire I liked 285/75/R16 10 ply. Driving home they felt pretty okay. Jeeps are a little flighty at highway speed, and the new tires make it worse than the old ones did, but it's definitely drivable. I'm tempted to fiddle with the toe-in to try and stabilize the new shoes a little. We'll see.

The rims are 4.25" backset. I got paranoid at the last minute, as it turns out I probably could've gotten away with a fair bit more backset (backset is the distance from the inner edge of the rim, to where the wheel bolts to the axle, so more backset moves the wheel more inboard). More backset has the advantage of making your vehicle narrower overall and fitting your wheels under the fenders to make them legal in more states. A lot of folks like the look of less backset, and it's less likely to end up rubbing, and I will say... I'm not even close to rubbing anywhere, especially with the fender trim. I kindof want to try going to full flex just to see if it rubs then, but I doubt it will. 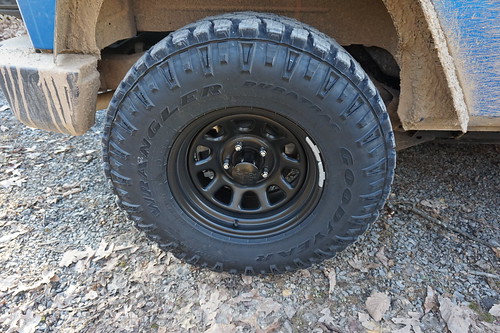 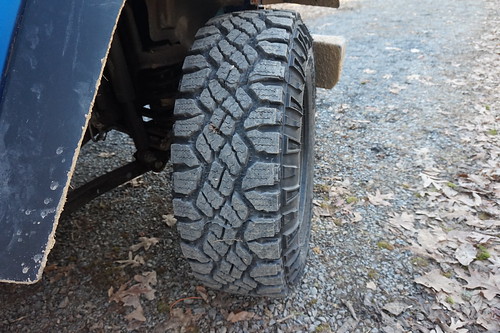 I'm so used to "underpowered" vehicles, I actually like the feel of the engine and transmission a little better with the larger tires and 3.21 gears. It's easier to keep static friction and not overtorque - I know I'm breaking some terrible rule of 4x4's and MORE POWER. Right now I'm thinking rather than re-gear if I feel I need more low-end torque I might consider swapping the transfer case... Not for a while though, that's a lot of money to drop and she's built enough to be pretty darned capable. Besides that I still haven't tried things like pulling my trailer.

I can't wait to get the rig out on the trail. It should be a lot of fun.