A while back while I was visiting my parent's, I mentioned that I was toying with getting a lantern. We use a white-gas stove when a fire is too much trouble or not legal, so we already have whitegas around. So, Angie and I thought it might be nice to have a whitegas lantern around. It turned out dad had an old one in the attic that he pulled out and gave to me. It had no glass, and when I tried to light it up it didn't work 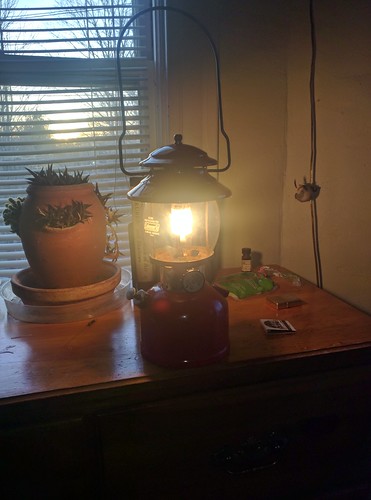 With a little poking around I figured out that this is an old Coleman 200A (and then I noticed the label that said exactly that on the side... heh). I ordered it a new glass.

I tried lighting it over and over again. I pumped it up and it held pressure. I did a little more reserach to make sure I understood how the pump worked, how the lighting process worked... but it just wouldn't light. It didn't even make any sounds when I tried. After more research online I found a lot of folks mentioning pouring out the fuel, pouring in ethanol, slosh it around, leave it there a day, then pour it out. Then rinse with whitegas again, and finally refill it and try again. I even found a reference in the directions for the 200A.

After I did that it made noise when I turned the valve it did make sounds, but still nothing would light... shoot. So, then I found this video:


Following this I disassembled the lantern and checked each component. I tried pumping it up and cracking the valve a bit with the generator on, but didn't really smell gas. I also tried with the generator off, and it bubbled, but only a little. I talked to my dad a bit, and we decided whatever was wrong it was clearly in the fuel takeup. After I'd taken it apart it became obvious that the fuel-air tube had a hole at the bottom for fuel, and one at the top for gas, clearly it wasn't mixing them right. After I pulled the fuel-air tube off I noticed the pin inside was very rough feeling, so I scratched and cleaned it, then ran it over an Emory cloth to really get it smooth.

Woot! I'd probably just found and fixed the problem! Then I reassembled it. Most of the parts are screwed on quite tightly, so I screwed the fuel-air tube on tight... and sheered it. Damn. Quick search on ebay and I found one for $5 and $5 more shipping. That came in today, so I put it back together and Hey! It works!

Here it is unlit for a better view: 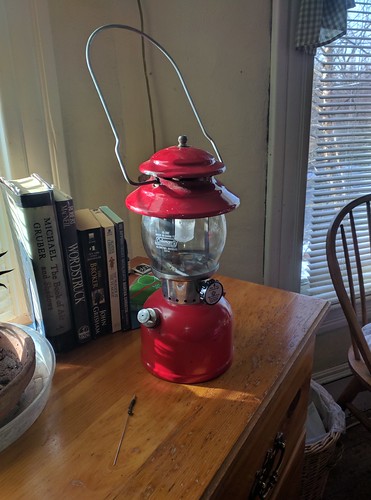 So ~$28.50 total to get it working, $10 of which was only because I stupidly broke it. Not bad! Lanterns of this sort sell for $50-$200 depending on condition. This one has a touch of rust on the burner frame, but otherwise is in really nice condition, You can't get a new one much cheaper.

Fun little project... I'm excited to hang it under my cotton-sheet tarp supported by sticks for that nice homey feel once we get the truck back.