In my search for a lightweight set of backpacking gear involving no plastic, I've been looking for something that works as a sleepingbag.

My thought had been to go with a twined rabbitskin blanket. There's research showing these are incredibly light, and that one in the 4-8 lb range can likely outperform a 0 degree down sleeping-bag in raw insulation ability (ignoring shape issues). They've been used for many thousands of years (we've found them in archaeological digs from near the last ice-age), so clearly they work. There's only one problem, to make one large enough for me to wrap up in would require ~70 rabbit-skins, and I don't have easy access to that many rabbit-skins. Traditionally people would have plenty of skins just from their regular hunting for food, but I've yet to hunt rabbit.

While I was working on finding a good, ethical (by my standards) source for these hides I went to the Big E (a large agricultural fair in Massachusetts) with Angie, and ran in to someone selling alpaca skin blankets. I couldn't resist and bought this for $400: 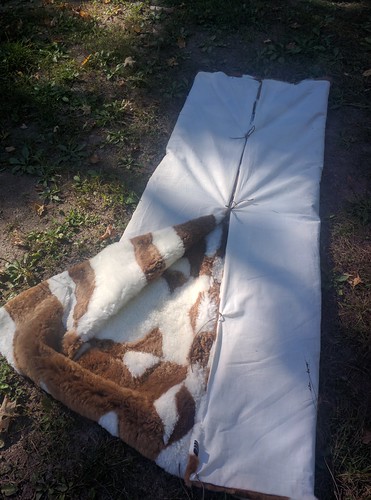 Surprisingly, no alpaca are harmed to make these alpaca skin blankets. Alpaca are worth WAAAY to much to kill for their skin (we're talking 10's to 100's of thousands), so these blankets are only made from scraps of alpaca hide from alpaca that have died of natural causes, sewn together in a patchwork.

Alpaca are a species of Camelid. Closely related to Llamas they've been bread in the Andies for thousands of years as a source of wool to keep warm in the high mountains. This is in contrast to llamas which were bread as draft animals. Alpaca fiber is actually warmer than sheep's wool, and most importantly for me it's hypoallergenic (I have a mild allergy to normal wool, sadly). It also sheds dirt crazy well, and basically doesn't slip from the hide at all.

To make it usable as a sleepingbag I took some buckskin I tanned and used that to add some ties so I could tie the foot closed and bundle the rest around me. The idea is to use it like a backpacking quilt, where the joint between the two sides ends up under me so it won't leak much heat. I can open it up of course as well or use it in other configurations in warmer weather. The hide was already backed with a fairly open weave cotton canvas to add a little wear resistance, so I'm leaving that on for now.

So, how does it work?

I tested a couple of nights ago. I slept in it naked and at 3:00am it was 40F and dewy, and I was definitely warm enough. The biggest issue was drafts through the foot box. I think with a little more fiddling to bundle the footbox tighter and seal out drafts it'll work down below freezing pretty well. I'm guessing I can take it to ~25F without trouble, which is good enough for my purposes.

I'm about 5'6" and I bought one just barely long enough and wide enough for me to keep the weight down. I also bought the lightest one the lady had (made apparently with juvenile hides, which are thinner)  The whole thing weighs just a bit over 5 lbs, and rolls up to about the same size as my current 5F down quilt. Here's a photo of it rolled up, with my hand for scale. 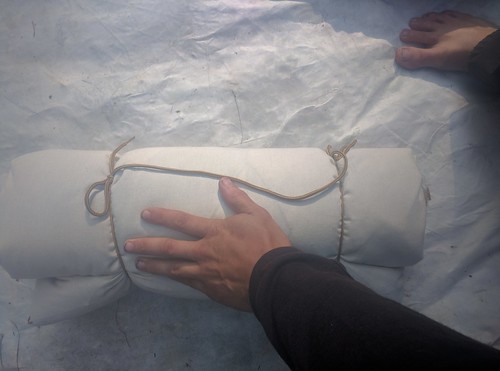 For the test I ran a couple nights ago I used a normal closed-cell foam sleepingpad on top of an oilcloth tarp I treated. Along with fiddling with the footbox I need to do more experimentation with pads. Depending on how badly it absorbs water, and how insulationg it is to lie on I have to work out whether I need a ground cloth, a ground pad (and what material to use for that), or both. That'll have a big impact on my final weight.

In other news, the oilcloth worked great as a groundpad, and when we took it up in the morning the fabric was a touch damp, but it hadn't wicked much of anything through. I need to run more tests on it still, but hopefully I'll have some good news to report on that front as well in a couple of months.

So, I'm going to say I've solved the problem of a light enough sleepingbag for my "no plastic, AT-style backpacking kit" project. Woot!

UPDATE:
I've added draw-strings to either end by simply punching holes in the backing fabric and running twine through. This lets me draw the foot up nice and tight, and draw the top up around my neck, making it MUCH warmer, this probably gained me 10F worth of warmth.

UPDATE 2:
I've now actually slept in ~28 degrees, and a bit windy. I wrapped the alpaca in my waxed cotton poncho, and used no ground-pad, though I did wear a hat, warm tights, and a sweater (I took off my second sweater and put it under my hip, for extra insulation).
Surprisingly I was actually quite warm, particularly for my toes. The draw-strings make an enormous difference.
Overall, This should be plenty good enough for an AT kit.