Here's a pair of pants I juts repaired. Somehow a coal got on it and melted a hole through it (no damage to me). I patched it with the remntants of another old pair of pants. You can see the crotch has already been repaired in a similar manner (on the outside for chafing reasons though).

In this case the fabric has some plastic in it, so I finished the edge with fire, then whip-stitched around the edge to stitch it on, then around the hole as well. If the patch was all natural fibers (like one I did on my long-sleeve shirt recently), I would fold the edge inwards first. This is actually a lazy version of traditional sail patching techniques, where you would cut the old fabric fold it under and whip-stitch it as well. 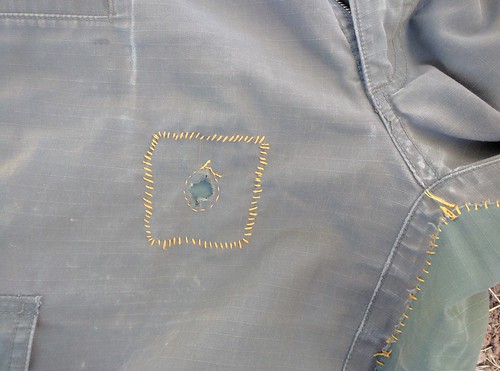 I've been wearing my buckskin shorts a lot more lately, and a couple of the seams started to open up a bit, I used an awl the work the stitching tighter and tie it off tighter again. 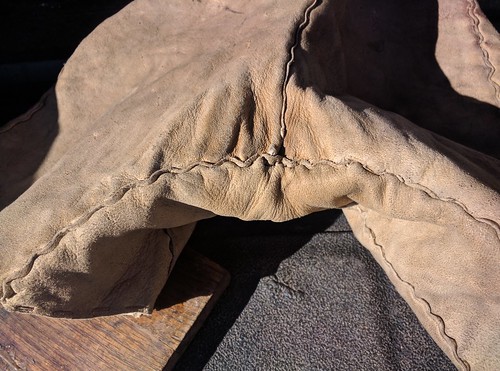 These are my climbing and running shorts, an old pair made of nylon. The rear pockets have been sewn back on, and the seam below the front zipper had already been restitched. This time I was restitching the crotch seam. The fabric on these seems to be holding up way better than the stitching, so Just keep sewing them back up again :P.

Note that the old repair is just a simple running stitch, but the seam I was repairing this time had been serged... I went with a blanket stitch to try and finish the edge of the fabric at the same time (at least I think that's a blanket stitch, I kind of made it up as I went). 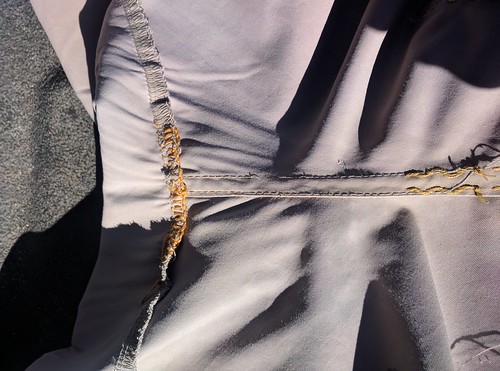 In a similar effort to be less wasteful and throw less stuff away Angie has been learning to shave her legs with my straight-razor (which she gave me for Christmas actually). I wanted it because it bugged me to throw away disposable razor blades, and because it doesn't jam up so badly when the hair is long. She started using it too for exactly the same reasons. We run it over the strop a few times after every use to keep it nice and sharp. 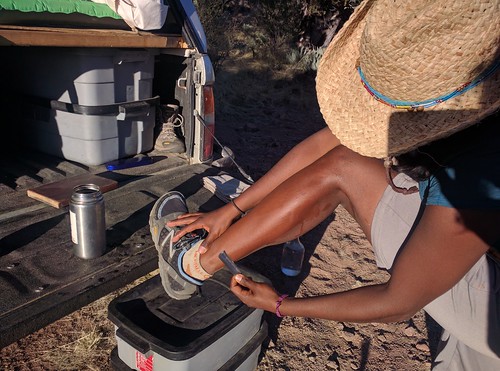 When you have fewer things, it's much more apparent that they wear out. If you have more things they wear out just as much, you just don't notice because the wear is distributed across so many different items. Angie and I hate how much trash we create (mostly from food packaging, actually), but try and reduce it where we can... also, it's a good way to save money so we can spend it on better things, like burgers in town.