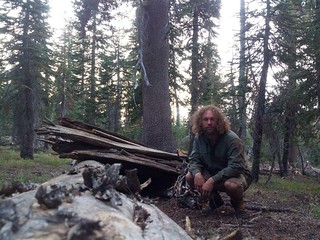 After my swiftwater class I wandered my way north on 49. I don't really have a reason, it's just what happened. Eventually I found myself outside Lassen National Forest. I stopped by a ranger station and picked up some large-area maps, they aren't topo, but they have all the little roads.

I decided to park in the Forest just outside the park and hike in on a trail that was supposedly there. Longtime readers may remember my last 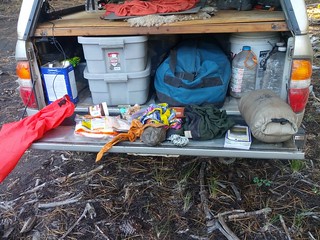 You'll note a lack of things like shelter, raingear, much warm clothing, a sleepingpad, or any cooking equipment. It had been cold the night prior (not sure how cold, but pretty chilly, maybe 40s), so I wanted a sleepingbag as backup just in case.

I had a pretty fun hike. It was hot so I was shirtless the whole first day exploring the cindercone, lavaflows and such. I was also in search of volcanic glass, you can see how it could form. This is closer to a chert, but you can see that it's starting to break the right way. It's got too many bubbles and is too inconsistant to be useful though, sadly. 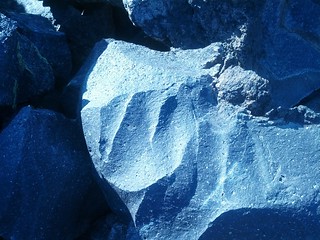 During the hike someone asked me if it was worth hiking to the top of the cindercone. Judge for yourself 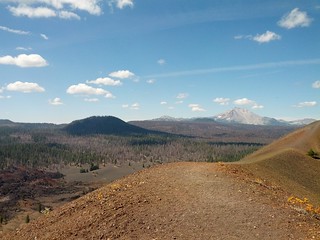 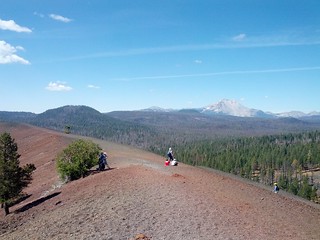 I got kindof sunburned actually. Once I realized this I started looking around and saw some mule's ear. I chewed it up, spit it out and put that on it. I knew mule's ear wouldn't hurt me to chew, and that when you mush it up it gets kindof gummy so might work like other moisturizers. It worked quite well. The burn hurt a bit to touch, and that evening and the next day it wasn't even red. 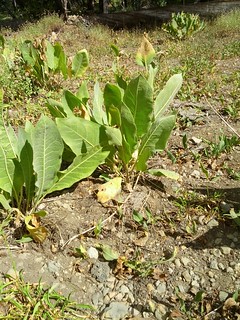 I also found some delicious Gooseberries. Yum! These might actually better be called currents (they are closely related) in any case, they were delicious. 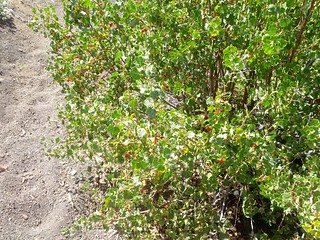 Lassen is hard hiking due to the sand, especially in the northeast side where the cindercones all blew their tops. After maybe 14 miles I was sufficiently exhuasted that it was time for bed. I got out to national forest again (still many miles from my truck). The sky was threatening so I needed to do something about rain. I had no rain-gear or shelter except an emergency bivy. My backup plan was to slit one side and the bottom of the bivy and string it up as a makeshift tarp using the twine. As it turned out though my shelter worked out great, and only took maybe 2 hours to build. 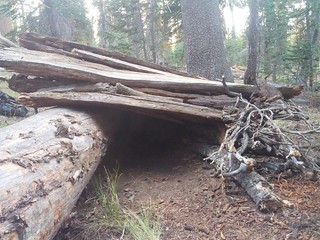 In the Sierra downed trees often rot so that the middle turns to dust but the outside takes longer. As a result you can pick up these sort of panels of rotting wood. This is about as perfect as you could ask for for shelter building. I found several such trees next to each other and a less-rotton log to use for one side of the shelter. 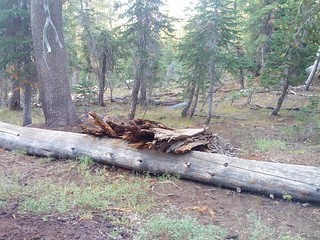 After these pictures were taken I spent some time chinking all the holes. This took at least as long as building the primary shelter. I figured I'd already protected myself from the wind. My goal now was to reduce air circulation so I could actually heat the inside up somewhat and use it as an insulating layer. This sort-of worked, but not as well as I hoped. I'll keep chinking in mind earlier in the process next time. You want it as sealed as possible. If I'd had a shovel I would've burried the whole thing. 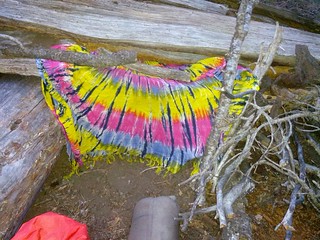 I had originally grabbed the sorong for gathering things I found and carrying them. As it happened though it worked perfectly as a door to try and cut down the air circulation further.

I started by trying to sleep in this shelter with just the canvas shirt, shorts, shoes and socks on. That didn't quite work, I was definitely okay and would've probably even gotten a little sleep but I couldn't get comfy. Next I tried putting my wool shirt over my legs... that was a waste of the wool shirt. I swapped the canvas and the wool shirts. I still couldn't get comfortable enough to sleep (I'd been trying for maybe 3 hours by this time, fidgiting with the shelter and tweaking my clothes). So I put on the wool shirt and the canvas shirt over it and I broke out the emergency bivy. I figured I still wasn't using the sleepingbag, I was only using gear I typically carry on a dayhike, so if I actually slept and was happy with that it was an accomplishment. This was downright comfortable! I slept for a solid 3 hours before waking up.

I usually sleep for 3 hour spells when out backpacking. Generally I get up and pee, shift things back into position if I slid down a hill or whatever, roll over, and go back to sleep. So generally I wake up two to three times a night. So 3 hours means everything is hunky-dory for me.

On my next cycle I slept 2 hours. Not bad, but I was starting to get damp from the emergency blanket. I was pretty damp when I got up. The temperature outside was still dropping as well. That said, I had 5 hours of sleep. If I didn't sleep the rest of the night that'd be a pretty good success. I got between an hour and two hours more that night in shorter segments. The last time I got up and went back I shivered for a while in the shelter, but warmed up again in not too long. I finally got up at 7:40 after stalling a bit waiting for it to warm up outside. It was still chilly at this time so I shivered for the first half mile of hiking. I'm always cold when I get up in the morning though and it was a good healthy tooth chatter, I wasn't cramping up at all and it definitely wasn't the nearly hypothermic shiver that threatens to stop if you get colder.

It didn't warm up much the second day. It sprinked several times and actually broke out into an honest-to-goddness rain one time for a couple minutes. I just wore the canvas shirt the whole day buttoning and unbottoning as needed. The rain was short enough that it barely got wet. Had I gotten wet I had the wool shirt, which even soaked would keep me warm enough as long as I'm hiking. Personally I get cold when I sleep and I'm very cold in the morning, but once I'm moving I get very warm.

For me, this trip was a huge step. This is the second time I've ever been comfortable sleeping out in not super-hot weather without a sleepingbag. It's also the first time I've built a shelter on the fly out of need, and the first shelter I've built that I think would have a hope of keeping me dry in a normal rain.

As yet one more bonus I found not only gooseberry and guessed at a sunburn treatment. I also found lichen that you can eat like spaghetti (NOTE: I've never done this, Jess has and explained it to me recently). There's a fire-ban on so I couldn't make a fire to cook it unfortunately. Still, gooseberry and licken for dinner, and a shelter I could've slept in with no other gear and been fine. In short, I almost could've lived a day or two out there. 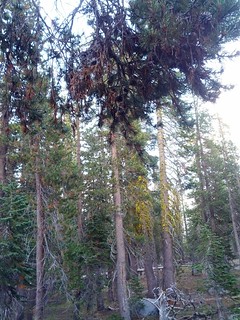 An aside for anyone thinking of doing something crazy like this. I'm not going to say don't try this at home, the point of this blog is largely to encourage people to just try things. But please be careful:

Please, if you're going to do something like this bring extra gear and/or make sure you understand your needs and signals and the weather extremely well. It's your call what margin of safety you want of course, but if you decide you went with too much you can always go again with less.

Just to illustrate that not everything went smoothly, I managed to leave my knife in the shelter. I drove around to the other side of the park and did a midsized dayhike the next day to get it back. Happily I found it though, YAY!

One last thing, I upgraded my phone recently, and now it can do "sphere" photos. Here's the first one I ever took