I've had the bag on the left for a long time. I used it as my wallet and "murse" ever since a generous friend of mine gave it to me back in 2006. It's been on my hip any time I've left the house, excepting only when I'm backpacking. In addition to money and cards it held my keys, albutorol inhaler, usually a knife or two, emergency whistle, and a pair of medical gloves. It lasted 10 years in this capacity... impressive!

Sadly though, even well made leather items eventually wear out. The stitching is STILL solid, but eventually the leather itself simple wore through. It's hard to see in the photos but there's a hole in the bottom of the bag, the straps have notches worn in to them going halfway across each strap, etc. In short, the bag is done. It is an ex bag.

What to do when one of your favorite items finally fails and you can't buy a new one (or even if you can)? Make one! 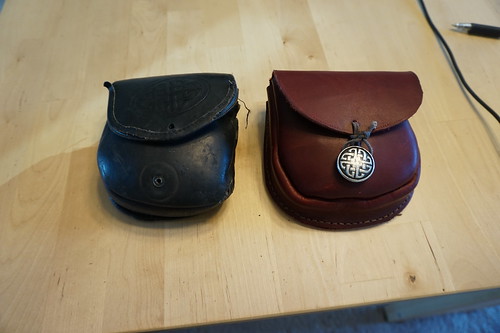 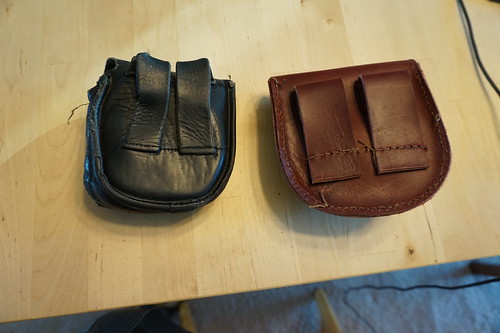 Since I liked it so much I traced the original. My leather is thicker so I knew it wouldn't bend the same way. I'm also sewing with heavy linen by hand, rather than light thread with a machine, so I can't get as near the edge as they can. I also wanted it a bit bigger if everything. So given that I added a significant extra allowance.

I first sewed the front to the side piece, inside out. I of cut the side extra long, so I could just line up one side, and sew across, then trim off the extra. Next I sewed this to the back. This time right-side in so the leather against my hip would sit flat keeping the pouch tight to me instead of floppy and giving a similar look to the original. I missed slightly and it came out crooked, so before I finished the second seam I pulled out a couple of stitches from the first seam, trimmed the front and side so it'd line up flat on the back, and then tied off that first seam again.

Finally (because I forgot to do it sooner) I stitched the straps on. You can't see it here but I did a "Z" pattern on the first set of stitches, like a lazier version of the "X" you see on backpack straps. Then I flipped the strap down and sewed the bottom down.

Lastly I pulled the button off the front and moved it over.

I'm really happy with the result, it's just a tiny bit larger, making it the perfect size. It sits a little higher on my hip helping compensate for the extra size. Also, it took about half a day to make. I don't think it'll last as long as the first one because the stitching is much more exposed, but I'm very curious to find out how long it does last.