Jess and I went up exploring into Oregon and then shot East out across Idaho and up to Yellowstone. Some friend's Jess met this summer work for the Buffalo Field Campaign http://www.buffalofieldcampaign.org/. So we figured we'd drop by and say hi for a couple of days. To be clear, the "Buffalo" field campaign is about the American Bison (not technically a buffalo, though that's it's common name) https://en.wikipedia.org/wiki/American_bison . 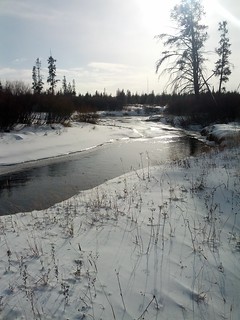 I'll be honest. I kindof expected a cool group of folks, but a pretty heavy dose of the sort of environmentalists who think anyone who isn't Vegan is a terrible person, and that sort of thing. I was completely mistaken.

Turns out it's a pretty varied group, and in particular a good portion of involved folks are not only meat eaters, but hunters themselves. The organization has been around for a while (and made a real difference in that time) and as a result they really have their ducks in a row. The BFC's reasons for being against the Buffalo hunt are much more nuanced than simple "don't kill the fuzzy things", and their way of fighting is by 1) gathering hard data through rigorous field work and 2) educating people (hunters, ranchers, lawmakers, park officials etc.) about the issues and being involved in the debate. The site here at West Yellowstone is one of their jump-off point. People stay here all year, including Yellowstone's extremely harsh winter. It's early December and is likely to hit -40F (-40C) this week. They gather data every single day on the buffalo's movements, and actions taken by agencies, hunters, etc. involving the buffalo. 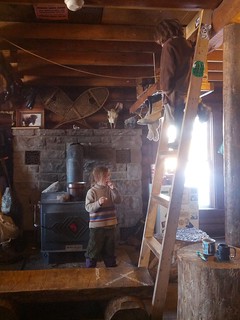 (This is a couple of kids Jess met this summer actually, who were also at the BFC).

I'm sure I can't do it justice, and the arguments get pretty complex, but here's the short short sinopsis of the general points:

The Yellowstone Buffalo are not allowed outside of Yellowstone. If they leave they are driven back in with paint-ball guns and the like, a process called "hazing". If driving them back fails, they are killed. The National Parks manage the number of buffalo precisely, taking any "surplus", through a combination of hunting permits, and slaughtering the buffalo themselves. What the carrying capacity is seems to be one point of debate: http://www.buffalofieldcampaign.org/faq/howmanybuffalo.html

The other major point of debate is Brucellosis. A disease which slightly reduces the healthy birth-rate of calves in cows, and has less impact on Buffalo. Brucellosis is the primary "reason" that Buffalo are killed when they leave Yellowstone: http://www.buffalofieldcampaign.org/faq/whatisbrucellosis.html . However, the scientific backing for this seems to be slim to none. The real issue is more likely that ranchers don't like buffalo damaging fences and competing with cattle for range. A reasonable thing for ranchers to dislike to be fair. The ranchers then put pressure on the government toward this end. Unfortunately to date no-one has come up with a functional/practical way to make it beneficial for landowners to let the buffalo range.

A bit of quick background for those who don't know. The buffalo were intentionally nearly made extinct in the United States as a way to win the battle against the plains Indians. By removing their primary food supply the U.S. government hoped to force them into submission. To accomplish this they payed hunters to by the head for slaughtering buffalo in an attempt to completely exterminate them. http://all-that-is-interesting.com/post/5631232781/the-near-extinction-of-american-bison-in-the-1800s . Most of the results of the hunting (meat, bones, hides) went unused, though hides were often sold for a small amount of money.

Here's a timeline (though a cryptic "extermination began" describes the program) http://www.fws.gov/bisonrange/timeline.htm. Here's a great explanation and set of pictures http://www.environmentalgraffiti.com/news-near-extinction-american-bison

Sorry I'm lacking cool photos of Bison. Jess did go on a patrol and saw 26, and we went on some awesome hikes, but we both forgot to take pictures. Anyway... The Buffalo Field Campaign is a pretty neat organization if this is the set of issues you care about.