Recently Jess heard about a technique for sleeping out in cold weather where you use trashbags filled with leaves as insulation. This sounded pretty cool, so we decided to give it a try. In addition, we wanted to cover a little bit of ground, just because neither of us had done a longer-distance backpacking trip in a while.

I'd also been playing with the idea of doing trips without a cookpot, by cooking sausages over the fire as warm food. If you've been reading this blog you know we've also been trying ponchos as shelter, so there's no separate tarp. Well with no sleepingbag, no cooking gear, and no tarp, that's the bulk of the gear, so we were pretty excited about this itea.

We weren't sure exactly how it would work, so we brought both emergency bivies (I actually had 2 as I had one that had already been used), and contractor trash bags. We also had sleeping-bags and extra coats as backup. Despite actually needing so little, with all the backup gear our packs still came out looking about normal. You'll see at the bottom though that the gear-list is a bit odd. 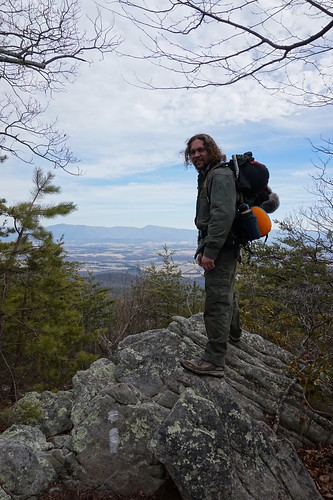 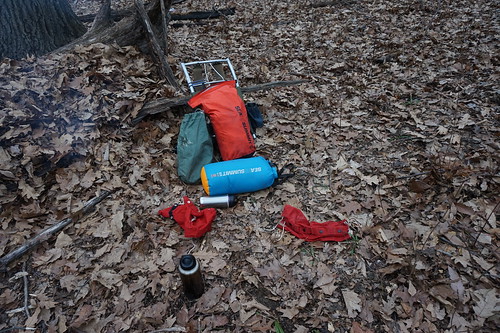 
We walked in a pretty long way. At some point we were talking about tea and I realized that I'd forgotten it. So we stopped to get some tea fixings. Fir is usually pretty good. 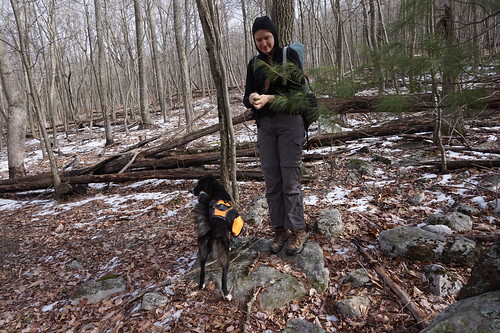 A while later we found a nice spot next to a stream. When using possibly marginal setups site selection is really important. We ended up on the south-facing part of a west-facing slope quite near a stream. This surprised us a lot actually. As a rule you want a south-facing part of an east-facing slope and you want to be relatively far from water so the humidity is lower. But, the spot we ended up in was quite sheltered and felt easily a solid 5-10 degrees warmer than the general average at the time. The stream didn't matter as it was steep enough that the damp air could fall down the slope and didn't build up near our campsite. All in all it was a pretty perfect spot.

After some discussion we decided that we were concerned about wind only from one side, so the smart thing would be to sleep on the lee-ward side of a log, in case the wind came up that way. Having finally selected our site we started building.


Our first task was to build insulating matts to sleep on. After a bit of consideration we decided to start by building platforms out of branches, this would supply us a solid separation from the ground even before adding leaves as padding and insulation. This is when we were about half complete.The near bed is mine, the far bed is Jess'. 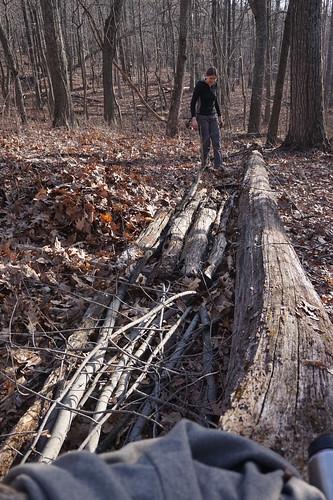 As you can see my technique isn't working quite as well as hers, I switched to something half-way in between her technique and mine after this photo. We also both placed branches as "rails" that sat higher on the sides and ends to help hold the leaves in.

Next we gathered leaves... lots and lots of leaves. We heaped these on to the beds until the beds were mounded high. Then we'd lie down on them squashing it all down and repeat. I found it helpful to gather into one of the contractor bags I had brought actually, as a way to gather from the best areas. Sadly, I didn't take any photos of this stage.

Once we had our beds we started on our sleeping-bags. Jess and I had slightly different ideas for this. I have tried sleeping in an emergency bivy several times, e.g. http://www.blog.smalladventures.net/2013/08/bushcraft-in-lassen-national-parkforest.html , and every time I do it I end up waking up soaking wet. To make it work I have found that I have to wait until I can't stand it anymore and *have* to use the bivy, to minimize my time in it. Otherwise I'm so soaked by the low around 4-6 am that I end up really chilled. This happens basically no matter how cold I am. Jess doesn't have this problem, she generally sweats very little while sleeping unless she is overheated.

As a result, Jess decided to use an emergency bivy, fill it with leaves, and then climb in to it with a silk liner. I decided instead to use my bivy like a quilt. I flipped it inside out (so the shiny part is out), filled it with leaves, swashed it flat, tied one end off, and used it like a quilt. Here's the bivies filled with leaves. 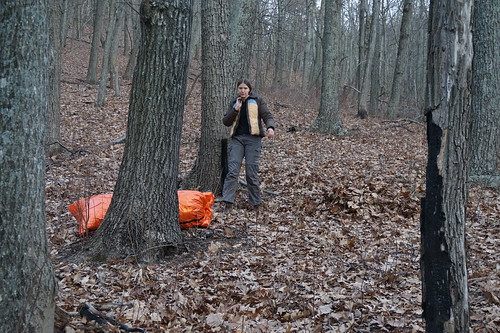 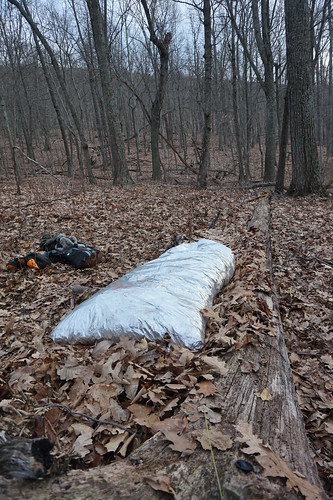 
Next, we pitched our poncho/tarps. The weather here has been very unpredictible lately and there was a predicted chance of rain, it kept shifting. We decided we really didn't want to get wet, and that the tarps might help a little with heat. This turned out to be the single hardest tarp pitch either of us had ever done, due to having to precisely locate the tarps over the beds. As a note, I find I need 50ft of twine (that I never cut) for a normal tarp, but I prefer to have more for a poncho-tarp. We intentionally hadn't brought stakes, but with a few carved stakes and some ingenuity we got it up and had a nice shelter. 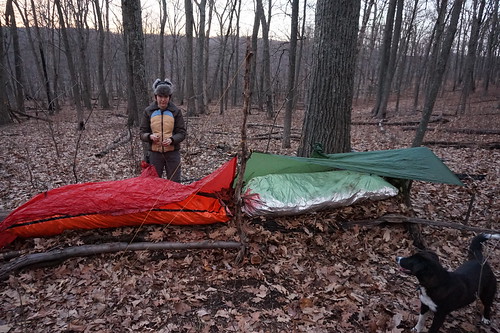 The leaves were so dry that I used them as tinder. I struck a spark off a faro-rod into a bit of cotton from the top of a pill bottle and that lit the leaves. Within minutes we had a nice roaring fire. Next we gathered wood and bucked it up using my handsaw. 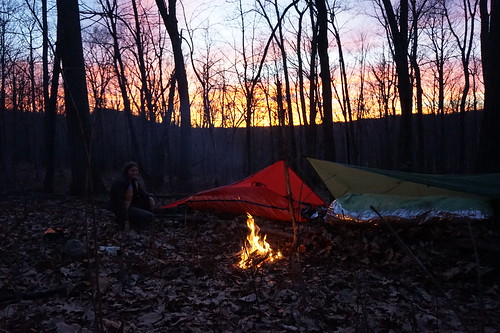 The sunset was spectacular. We dined on sausages roasted on sticks jammed in the ground, and some bread we'd brought with us.

How did it work?


We were both pretty surprised at how warm our setups were. We figure based on feel an local weather reports that it was maybe ~40F that night. Jess' was definitely warmer, as she had no air-gaps she said she was actually almost too warm, and that her setup would've worked down to much colder temps.

My quilt setup worked pretty well, but not perfectly. The emergency bivies are really too narrow to use like a quilt, because they don't droop over the sides enough to seal in the air. That said, throughout the night I slowly sank in to my leave bed, so the leaves around me started to seal the gaps from below. I could also snuggle up to the log a little letting me seal one side and in effect gain some width. Overall it worked just fine, and I would've been comfortable 10 or 15 degrees cooler easy, it's hard to say if it would work colder than that though, as it's a very odd feel. Some of the leaves are damp, and the mylar was against me, so it felt colder than it was.

One big advantage of the quilt method is that you only need ~4-5" of loose leaves. shoved in to the bag, more and it makes it stiffer and harder to use. With the sleepingbag method the leaves get crushed down easilly, and you need them to be densely packed enough to keep some on top of you. As a result, Jess found she needed several times more leaves than I did, making the setup take quite a bit longer.

Overall, given my sweating, the next time I try this I intend to use the quilt setup again, but with a bag that's maybe twice the width of the emergency bivy.

The rest of our trip

In any case, we both slept in comfort and woke up refreshed in the morning. After getting up we cooked up some sausages on our still going fire (I'd gotten up and tended it 3 times in the night). Once again I was reminded of how much longer large slightly damp logs burn than small dry ones do. 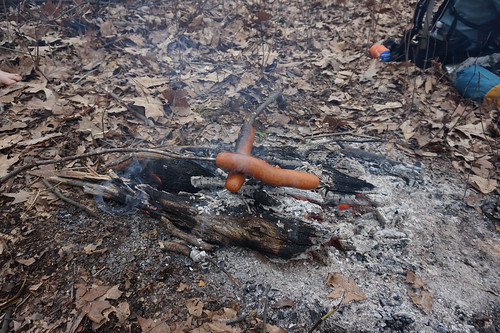 The next day we had a long beautiful and slightly more round-about hike home. Beau had a blast the whole trip, with her winter fur she was completely content the whole time. 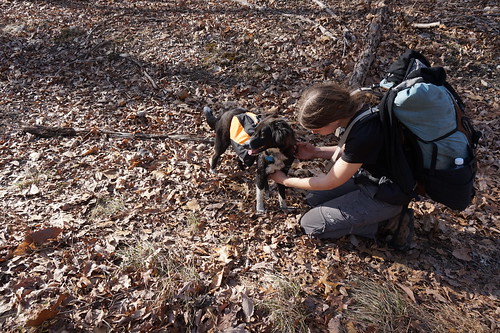 Here's the gear I brought and expected to use. Note that this is absolutely everything... I took this photo after I got home, and stripped naked to take it :P. 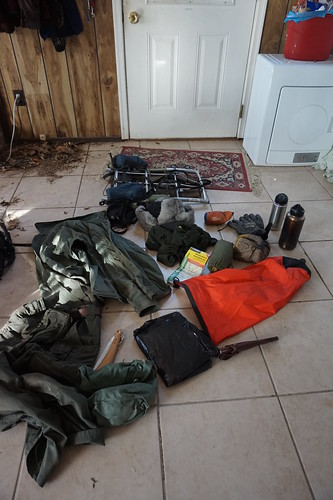 This is the stuff that I brought as backup and didn't use (actually, the gators were brought as another experiment, but it didn't end up raining on us). 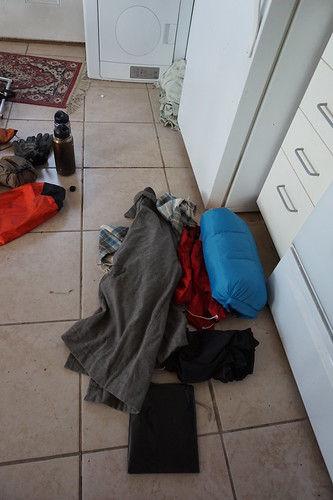 In really cold weather if I'm worried I think I would go with the "sleeping-bag" model. If it's cold enough than the Mylar bag won't make enough difference and the temperature at the Mylar bag will be below freezing. In this case the sweat will condense there and then freeze solid, thus keeping you dry. I would also recommend this method in other weather for folks who don't sweat much. Note though that this technique is trickier to get in and out of.

In warmer weather I think I want a bag that is twice as wide as a normal emergency bivy. This would be much faster to stuff with leaves than the sleeping-bag approach (despite being larger the leaves can be fairly loose), is very easy to adjust for temperature, and is super easy to get in and out of. This seems to me like the more general approach that I'd like to understand better and persue, as it should work in fairly cold weather as well.

Note that this technique only works when there are fluffy dry'ish leaves about. If we had a bought of freezing rain that soaked everything and then glued it to the ground, the leaves won't be very insulating. It remains to be seen what weather allows one to still get good enough leaves.

That said, in VA I suspect this technique works quite a bit of the time. It's especially tempting to adjust gear for day-hiking a little to allow for doing this, as it would allow one to voluntarily or not, actually have a fairly comfortable night in a fairly wide range of circumstances, while likely adding almost no weight to your normal kit (since many of us already carry the necessary components).

The sleepingbag for me has proven to be one of the hardest pieces of gear to substitute for or drop so far. So, I'm really excited about the possibilities this opens up and I'm really curious to see just how wide a range of weather I can get it to handle. I'm toying with the idea of making a bag for this purpose, maybe something like a "survival scarf": https://www.youtube.com/watch?v=LElsE3kseQM . Given that and a poncho I could sleep out in a lot of different weather while carrying a very very small pack. Also, it's one more step towards dropping plastics out of my kit.