Hey there! I'm Matthew's amazing fiance. I got interested in tablet weaving while we were at Wintercount, a traditional skills gathering in Arizona. I saw a class on it, walked up and watched for about 5 minutes, thought 'I got this' and wandered off. Since then I have been trial and error learning to do it right. Matthew thought it was cool and I should share so here goes... 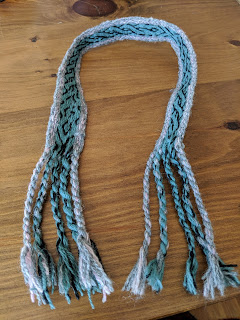 Tablet weaving is at least as old as the 8'th century, and is still a common method of weaving used today. What tablet weaving is https://en.wikipedia.org/wiki/Tablet_weaving

My plan was to get some cheap yarn to test out before using some nice yarn I got from Matthew's brother Daniel on Gnomespun.com . My hope being that by the time I use the nice stuff I won't mess it up too badly.

Second step, Materials:
- Yarn (bought a pack of 4 colors at the thrift store)
- Scissors
- 2 bar clamps
- Tablet weaving cards (made out of scrap cardboard, four holes each for yarn to go through)
- shuttle (also made of scrap cardboard)
- beater (I just used the scissors)

My first attempt failed beautifully. I screwed up at least 5 things. One of the youtube videos showed doing a continuous warp to get a good even tension https://www.youtube.com/watch?v=eConIrGd7Og . I did what I saw on the video, I put one type of yarn through each hole in the tablets and went at it... without thinking of the fact that my central pattern required only two colors, three of the same color and one different to show the pattern. Oh well, I decided that the pattern should still work and I would use the black yarn to indicate the pattern. I then removed the yarn from it's tension, then added tablets with two colors for the border pattern by doing each card individually. This was a little more tedious and in the end the tension was COMPLETELY off. I then tied one end to a bar clamp and attached the other end to myself with a piece of cord. I started trying to do the pattern and it was all wacky looking. 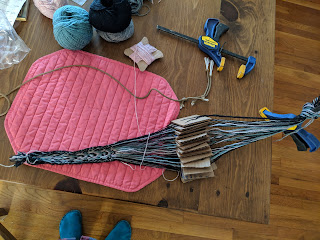 Here's the final result! It looks nothing like it's supposed to. After this attempt Matthew said he was sorry it wasn't going perfectly and I responded 'It IS going perfectly!'. This is how I learn, dive in, mess up, then get it right. So, it's a perfect disaster. After I gave up on this I realized the cards are supposed to face a certain way as well. 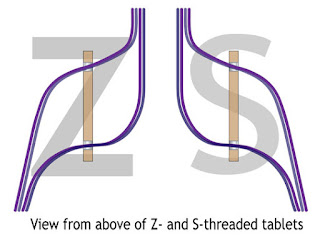 With new things learned I went for round two, this was naturally much more successful. I didn't do the continuous weave this time, instead going the slow route of threading each tablet individually. I gave myself a lot of extra yarn on each end to tie to the bar clamps and this time just kept them attached to that rather than myself. I also started using the scissors as a beater rather than the shuttle which is cardboard and couldn't beat down as hard with. This time I also looked up how to start the weave. To finish a weave you do this... http://www.theloomybin.com/doc/finish.html I thought okay there has to be a way to start the weave to keep it from fraying on that end too. I did find a video that showed how to lock in the weft https://www.youtube.com/watch?v=10P6VS-hErA 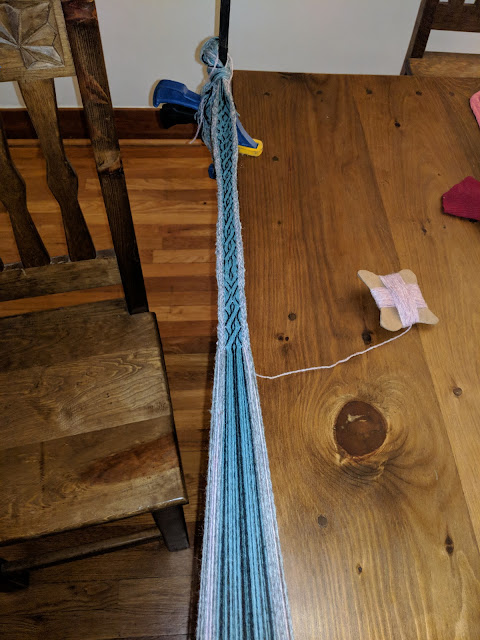 End of a day of weaving. I made this photo XL so you can see where I messed up. For one the tension was all wrong at the start, it was very loose and you can tell it tightened up but still not all the same tension. Also in the pattern I messed up somehow, I don't even know how! I was rolling along and getting cocky then boom, it's wacky. I figured out a few tablets were not aligned right and got them back on track. Unfortunately my tablets suck. The cardboard is corrugated and the yarn kept getting stuck in it, even after I trimmed the corners to be rounded. Oh, also learned that the farther the holes on the tablets are from each other the better, makes it easier to see which strings are supposed to be on top and on bottom when you go to separate them after each turn. 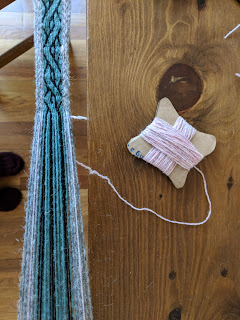 Day two with my second attempt resulted in the yarn busting! It all happened around the same time, in the end 7 pieces of the yarn broke... 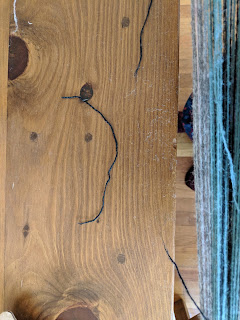 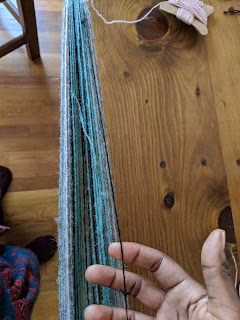 I attempted to fix them at first by just doing a square knot and some extra yarn. It worked just fine but the kept breaking so I abandoned ship by ending the weave, using the method linked above. I finished off by twisting the ends like you would when making twine...

I forgot to mention something else I learned. While weaving if you continue to turn the tablets in the same direction you end up with very twisted yarn on the other end of the cards. You can undo this twisting by doing the same pattern backwards. For example, my border pattern requires you only turn forward. So after about 20-30 turns forward I would swap to only turning backwards for 20-30 turns to get them unwound. It gets more tricky with the center pattern. For this design it was only the middle four that were a problem because for 4 consecutive turns they go in opposite directions and never swap directions to even it out. So, I learned the opportune time to swap them and you can hardly tell in the pattern. 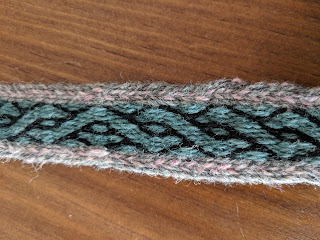 In this photo looking from right to left you see what the pattern is, it looks like to strings twisting around each other once you get to the left of the photo you see where it swaps. Anyway, I was really excited to figure that out before everything went haywire with yarn splitting. I think to avoid the yarn breaking I need better cards... or to stop moving them back and forth across the yarn every time. I was doing that to help separate the top and bottom strings so I didn't have them on the wrong side... but that may be the reason they all started splitting at the same time. Still, I want nicer tablets that have smooth edges, like these nice wooden ones I found on Etsy https://www.etsy.com/listing/58802858/tablet-weaving-cards-24-ash-55cm-card

Well, that's as far as I've gotten. I hope to make a nice belt out of this pretty yarn when I have a better tablet situation 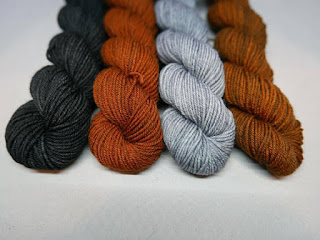