This weekend Angie and I decided to go rock climbing! 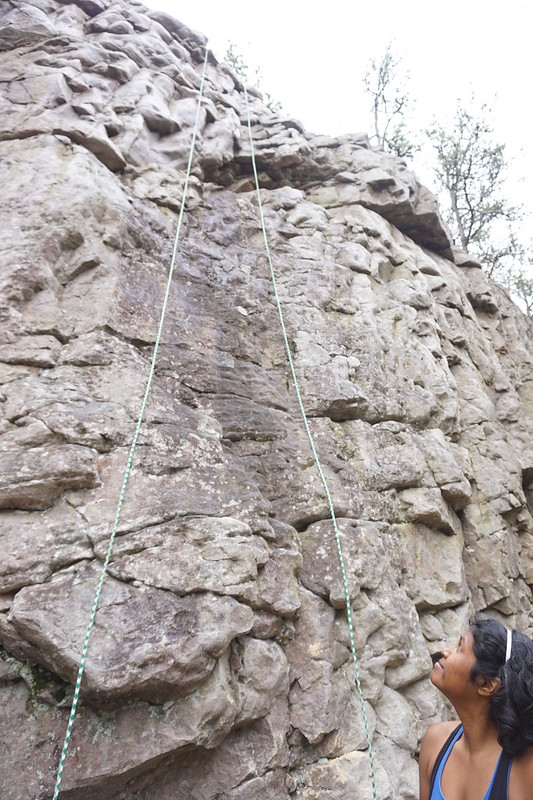 A while ago I bought a climbing guide "Rock Climbing Virginia, West Virginia, and Maryland", And I've been waiting for a nice warm weekend where we weren't otherwise engaged to give it a try. With all the rescue training I've done I'm quite confident in my ability to set a safe anchor and that type of thing. I've climbed outdoors before a few times, but I just haven't been the one to find organice a trip, find routes and that sort of thing.

We went up to "Hidden Rocks" Near Harrisonburgh and had a blast. We were climbing 5.4 through 5.7's assuming we understood the maps right. We arrived at the parking lot at 10:00am and got back to the lot to leave 5:45pm. We ran in to a few hikers, but only one other pair of climbers. We did 6 routes, and I think I ran 7 or so climbs... An amazing day. It was slightly overcast and a nice 50's-60's range of temperatures. For lunch we walked back to the car (about 30 minutes walk) and made up some ham sandwiches, giving our hands a bit of a break. 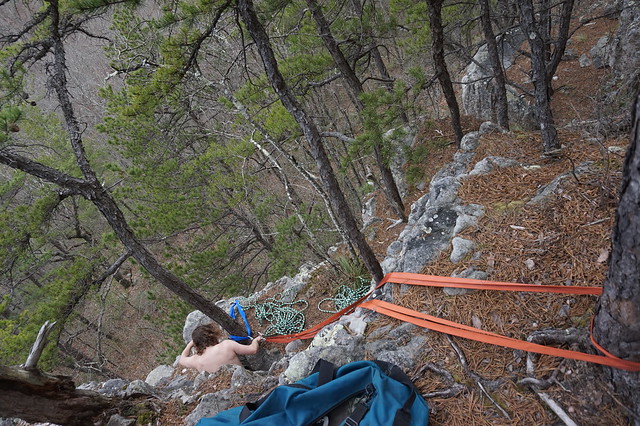 Above, for one of the routes we were slinging off of trees, and I was a little nervous about the size of the tree we were slinging with a wrap-3-pull-2, so we backed it up with a second wrap-3-pull-2 off a larger tree up the hill just to be sure. For a later route the only back-up tree was 30 feet back so I did a simple sling of 2 trees, but load-balanced them.

Here's a couple more faces we did. There are 3 seperate routes up this. left, center, and right, in increasing difficulty. The edge on the right doesn't have any cracks in it, so it's not a lyback, it's actually one of those you just spider up with tiny little footholds. Good fun, and a great reminder to me that climbing shoes can stand on truly minuscule little bumps when on real rock. The center climb has a really tricky bit in the middle where there just isn't much to work with.. Angie did both the left and the center. She's a lot less experienced, and was climbing almost everything I was. 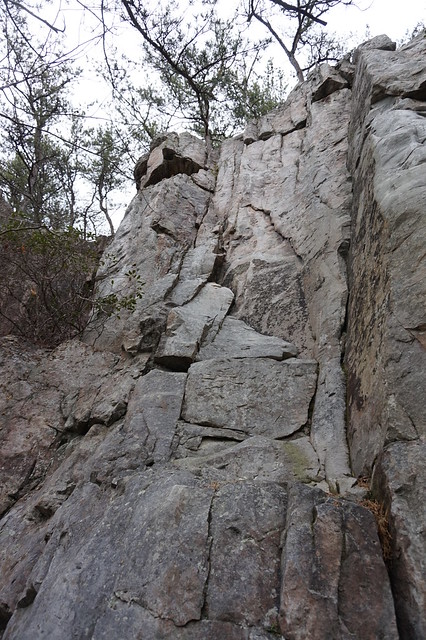 We did the crack last, it's off-width for a lot of the distance, but in several spots you can get a solid knee-jam. I'm still a total noob at crack climbing. I know a few jams, but in practice I always feel like I'm just scrabbling my way up it, not smoothly climbing. This was a blast and a great workout! 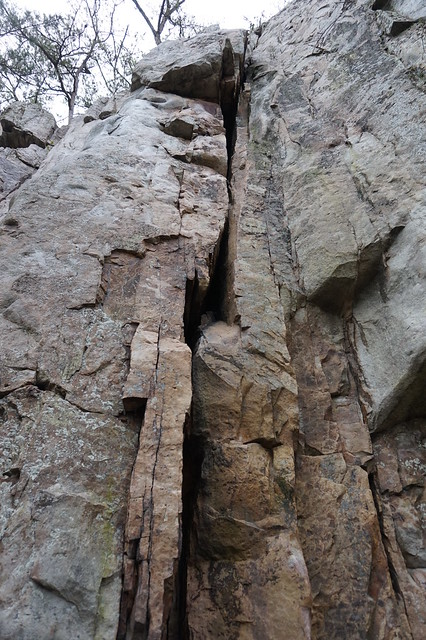 There are tons more routes at Hidden rocks that I'd love to do. Next time I hope to do some 5.8's or 9's. Most of it is top-roping or trad. I only have a few nuts, so we toproped.

Overall it was an amazing day, both Angie and I had a total blast. We came home exhausted and happy, hungry for a big dinner.