A while back I wrote this article: http://www.blog.smalladventures.net/2015/04/diy-linseed-oil-treated-cotton-sheet.html

Since the tarp worked I decided to try some further experiments. I took this tarp and made it into a poncho. This involved adding a hood, and a way to fold up a flap of the fabric so it didn't drag on the ground, because the tarp is too long for my height. I then used a second sheet and made a new tarp. I planned to use the larger tarp as a shelter, and fabric to roll my gear in and tie to my frame. I'd then use the smaller one as a groundcloth and poncho. So, how'd it work out?

For the hood I approximately traced the hood for a silnylon poncho I have. It's a simple 2-piece hood, reducing the sewing. This is especially important because I hand-stitched the hood using full-felled seams. This is a method for making nearly water-proof seams in water-proof materials, by sewing a flat seam, then rolling it and sewing 2 more seams (so it's 3 lines of stitching for every seam sewn). Note how in the picture below the seam is not only full-felled but layered such that the water flows off the fabric rather than into the seam 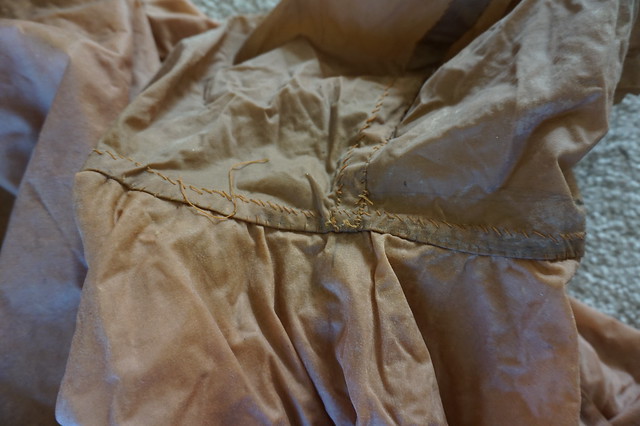 This worked *fantastically* and I ended up with a beautiful perfectly fitting waterproof hood. I was very happy with the fit 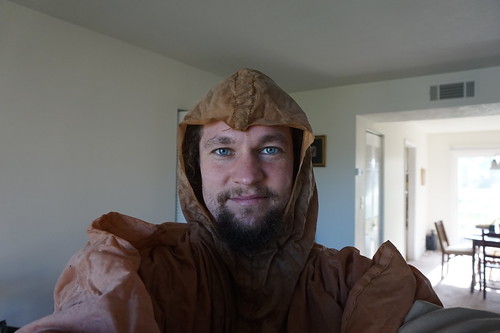 To make it actually fit I also added some buttons so I could button up the flap in the back. By putting the loops in the middle of the fabric and the buttons on the end it would still be comfortable to lie on. 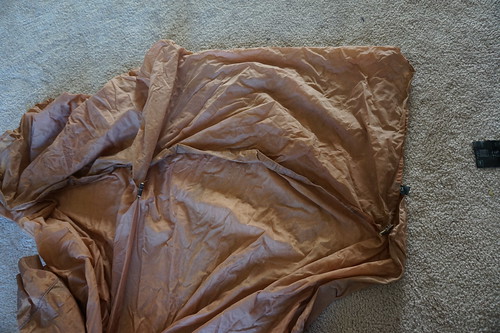 Sorry the photo is a bit poor, but the flap is folded down from the top of the photo and buttoned, you can see the button on the right edge, and the center. These were made from sticks by just carving a notch in the stick, and tied on using linen. The button "holes" are also linen twine.

This made for a fairly wearable poncho... not bad. It still smelled bad, but I hoped that would fade.

The new tarp is made from a 600 threadcount sheet I found at target for ~$18.00 if I remember right. Goodwill didn't have what I needed. It's a thinner sheet and as such absorbed less of the linseed and resulted in a significantly lighter tarp per square foot. It came out ~10'x10'. This seemed like a good size to test with, so I didn't bother modifying it.

I then simply sewed some linen tieouts to the edges and called it done.

Testing
I finished the tarp about a month ago. I forget when I sewed the poncho but I think it was last winter. Oddly, between that time and now I have basically not been on a walk in the rain. There's been some hard rain, but there was no point in testing it in a *light* rain, I needed real rain to even bother with it. In a sprinkle I've been wearing my 5.11 shirt over my icebreaker sweater for a couple of years now, and it works great.

Well, this weekend Angie and drove out to the forest, knowing it was going to rain, and I decided it was finally time to put this gear to the test. It was late, but we and I found some sticks, used a knife to carve stakes and hammered them in with the Axe. A bit if nylon rope and we had pitched the tarp. You can just barely see the poncho ground-cloth peaking out of the end of the tent. 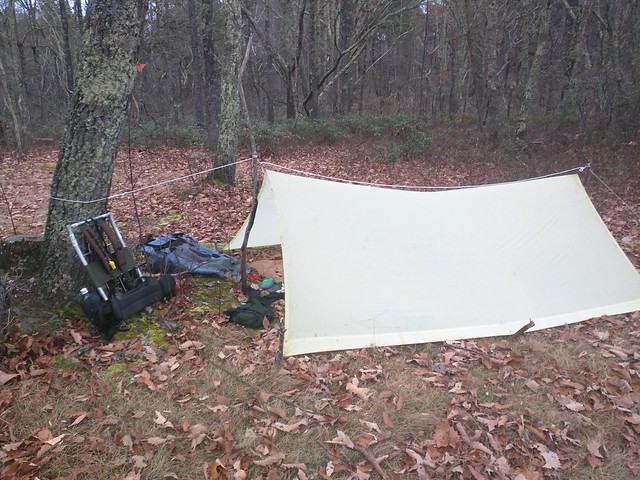 It wasn't raining yet, so we slept outside (partly to avoid the smell of linseed). Later in the evening though it picked up so we moved in. Overnight it was rain, but light rain. It worked fine and we were snug and warm, no problems. I touched the inside of the tarp and it was dry.

There was a break in the rain when we got up in the morning so we lit up a fire (on the 3'rd try... using a sparker some some plant fluff I gathered previously) just as the rain hit again, and cooked up a sausage for breakfast. After breakfast we decided to go on a hike.

Angie went to shift her sleeping-bag so I could use my poncho and discovered that it was wet where it had been touching the tarp! Not like condensation either. You could see that where the tarp was touching it, the tarp acted more like normal soaked through cotton. The treatment had stopped water from traveling to the underside of the fabric normally, but if something touched it and wicked the water away it would happily keep whicking water through the fabric, soaking whatever touched it. This is classic behavior for canvas, but I hadn't expected it given the dry feel to the inside of the tarp.

Next I pulled out the poncho and put it on... after 10 minutes with it on, before we even left, I realized my shoulders were getting sticky! Ick!  The poncho, even after hanging outside and curing for over week, and even where there wasn't too much linseed on it, near the center where it was just about right, had gotten sticky again when it got wet! DAMN! Given the behavior of the fabric on Angie's sleepingbag I was also convinced that it was unlikely to work anyway. All of this and both the tarp and the poncho still reeked of linseed smell.

Angie and I did go on our hike, I just wore my 5.11 shirt and sweater. It was actually raining, though not that hard, eventually my shirt soaked through and I was pretty wet when we got back. Not unhappy, but wet. We decided we'd learned a lot of what we had wanted to learn by coming out in the rain, and it was time to go home and work on how to make it more comfortable the next trip.

After the trip I was looking at the tarp more. The way it was pitched, with the middle low there was a band in the middle where it was a different color, here water was collecting and going through the fabric, then running down the inside... unlike the rest of the fabric. Also, we found a spot where there was a slight wrinkle in the fabric, and this was actually dripping slowly on to Angie's sleepingbag. Both of these are slow processes and not deadly at all, only allowing small amounts of water through very slowly, and steeper/better pitches will help... but I'm quite good at pitching tarps and I mean only a very very slight wrinkle.

Conclusion
Both pieces of fabric I've treated ended up with parts that stayed sticky and smelly even after a long time trying to get them to "dry". These spots are on the edges where the oil "flowed" to when it was hanging to dry. So, first up, if I ever use linseed again I'll paint it on, rather than soaking the fabric. This should help get a more even coat that dries properly and doesn't end up smelling as much.

Next, Linseed treated cotton is not usable in applications where it's *touching* something. It makes a usable tarp for shelter. The dripping noted above was extremely minor and I wouldn't hesitate to use down under something this waterproof in a multi-day downpour. That said, I'm fairly convinced that it would never make a very good poncho as it wicks water across the boundary. This is likely a property of most thin and lightly treated cotton fabrics, so it's something to keep in mind when figuring out the right fabric for any given application. Also, the smell and stickyness make it a non-starter for clothing in my mind.

I may try linseed again at some point, but I'm going to set it aside for now and try some other methods of treating cotton fabric that hopefully won't be as hard on my lungs, and won't stay sticky the same way.