Now that I got the trivial stuff out of the way, I went on to some still relatively easy but more drastic mods. I drilled my first hole in a metal part of the Jeep actually as part of the fender mod. It had to happen some time ;-).

I moved the vacuum pump up into the engine compartment - so I can install a winch plate (now coming in the mail). And I trimmed my fenders, for full flex once I get 33" tires on there. 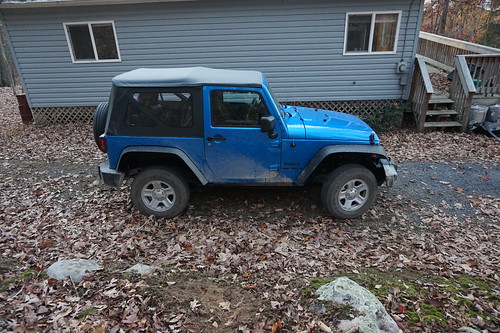 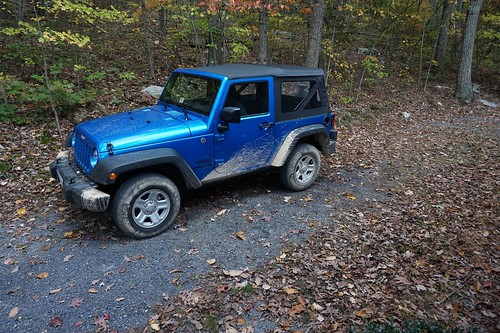 It looks almost the same right? Personally, I'm quite happy with that.

I'll note now that after digging through the VA codes, although a LOT of people seem to do this mod and no-one reports having problems, it looks like strictly speaking I'm not currently quite legal. Technically VA requires side-lights to be on the widest part of the permanent body of the vehicle, as high as is practical, and visible from the front. Mine are currently not visible from the front, nor are they all the way out to the side. I have some new lights I need to experiment with, but I think it'll be okay until I get around to it.

With this mod, you remove the entire inner fender from the rear of the vehicle. This exposes the body to all the rocks that get kicked up. 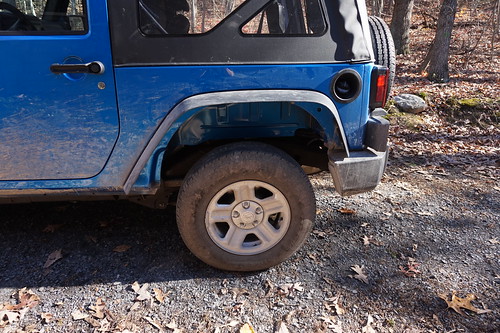 The easiest fix is to cover the area in spray-in bed liner. I got some duplicolor liner at an autoparts store and put on about 6 or so coats. Paint would've sort-of worked, but the rubberized coating should protect a little better against gravel dinging the metal. 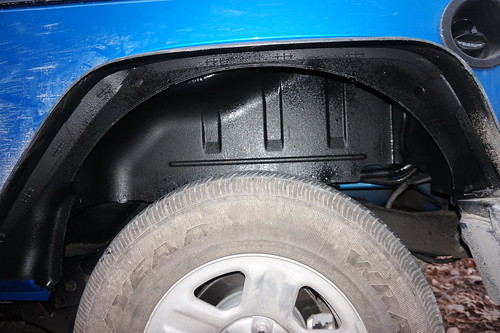 All in all it's simple and cheap, and it opens up a lot more space. It's pretty silly for the little 29" tires I have right now. It's not even needed for 33", but without trimming I'd probably rub at full flex and might have to adjust bump-stops and limit my flex more. This way if I put on a high-flex (low COG) lift kit later, (meaning a high quality say 1.5" lift kit), my fenders won't be what limits my flex.

The other project was moving the vacuum pump. The newer JKs have the vacuum pump just behind the front bumper. It's a really dumb place for it for several reasons. For example, the exhaust for the pump has to run back up and into the engine-compartment so it doesn't fill with mud. Also, it's directly in the way of basically anything you might put on the front, either a winch-plate for the factory bumper, or any aftermarket bumper. Heck, it even makes it hard to get the factory bumper *off*.

Sadly, I didn't take any pictures of it in the original position, but here it is in the new position: 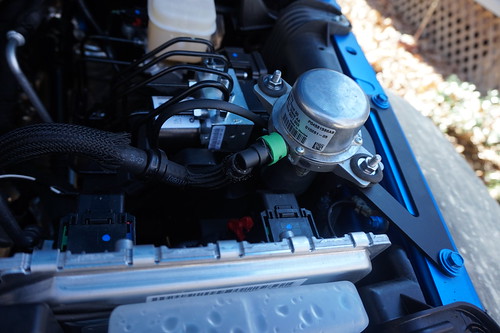 I purchased an OR-fab vacuum pump relocation bracket. It comes with stupid low-quality crimp connectors. I couldn't find good ones, so instead I opted to do a modified lineman's splice and solder it. The wire is milti-fiber copper core, so it was very easy to do. 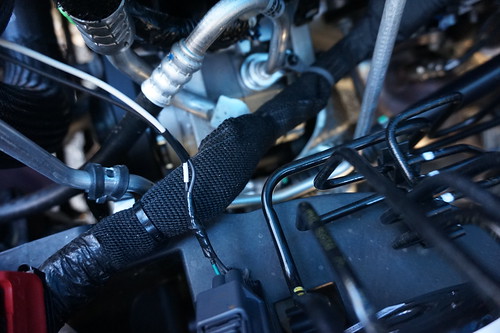 Here's what it looks like all wired up, you can see the wires running down to where the pump used to be, behind the front bumper. 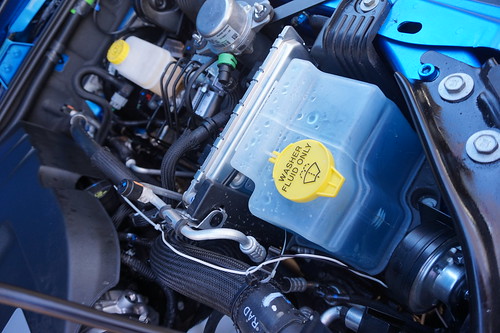 Besides simply following the directions, there were 2 other things I needed to do.

First, Apparently older JKs had removable nuts on the factory vacuum pump mount... mine did not. When I went to purchase some at the local hardware store I couldn't find ones that fit, so I got a new set of bolts, nuts, washers, and lockwashers... but although they seemed like they were close enough, these didn't fit through the sleeve. I pulled the sleeves and that got everything working. That's what the first picture is from. Later I found the right nut and put it together properly, you may notice the rubber looks less "squashed" in the last photo than it does in the first.

Second, you remove about 3 feet of the vacuum hose, and the entire of the exhaust hose, but you extend the wires to the pump by 3-4 feet. The kit didn't come with any wire loom for those wires. So, I picked some up at the auto parts store. Here's what it looks like all finished up: 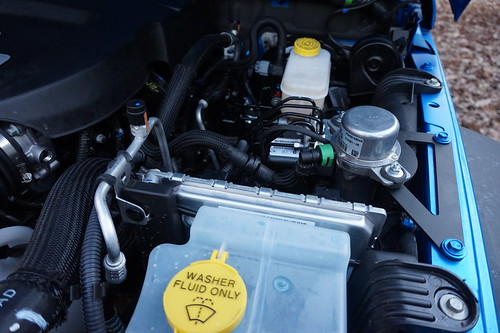 The new location seems better in every way. The vacuum tubes are shorter, the pump is better protected, the exhaust pipe doesn't need to exist at all. I don't know why they don't put it there in the first place. I'm pretty happy with the mod though.

More coming down the pipe. I'm not planning anything too crazy (yet), but there's a few more things I want to do that I feel like I'll really use. I was skidding logs with this vehicle, and had offroaded it, before it hit 200 miles. Given that, I decided I should spend the energy to make it nice for how I want to use it.