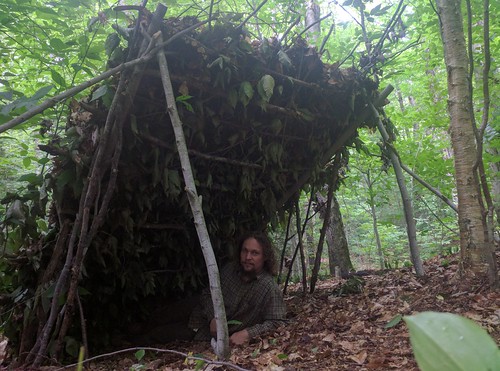 Angie and I decided to try building a primitive shelter. I've built a couple of debris shelters before, but, it being warm and not needing to block wind or similar we decided to try a leanto. The thought was that if we could build the angle low enough, the leaves might stay on it better, and thus not require quite as many leaves as a standard debris shelter.

Before you go copying this shelter, note that it didn't really work... but probably could. More detail coming.

Step one was to put up the main frame. Sorry I didn't take in progress photos. Using an axe I felled one tree carefully chosen way off the beaten path, and as being too close to another tree. There was deadwood, and most of the construction was done with that, but we needed 2 large beams for the main structure, and those just weren't to be found. 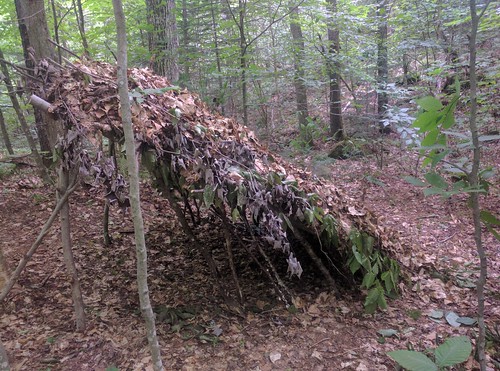 Using a folding saw we cut a couple of vertical poles with forks in them, and then using the axe I sharpened one end to a point and hammered them in. We cut the main trunk of the tree I'd felled in to the two main beams running from the ground and sitting in the forks.

Next came the cross-beams. Most of these were deadwood (those that weren't were limbs of the small tree). We considered lashing these on and tried several approaches, but then realized a better method. By breaking sticks with y's in them to the right length and placing them against the ground we could use the y to hold the cross-pieces in place... Here's a close-up to give a better idea. 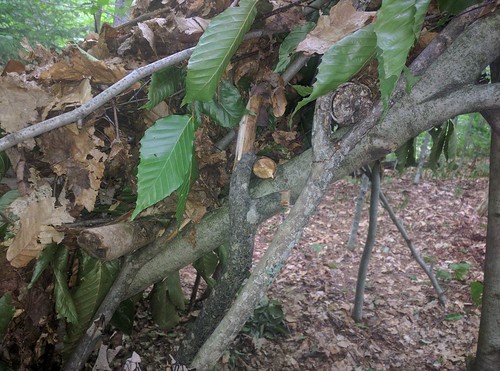 This method took a lot more pieces of wood, but we could use some real junk wood and didn't need twine of any kind. Pretty cool.

Once we had all the cross-pieces in place we started laying on the leafed branches from the tree we'd dropped, trying to cover the whole shelter with leaves attached to branches. This gave us a layer that should shed water better than normal leaf-litter, and gave us a base on which to pile litter so it wouldn't just fall through.

Lastly, we started piling on leaf litter from the surrounding area, spreading it evenly across the roof. 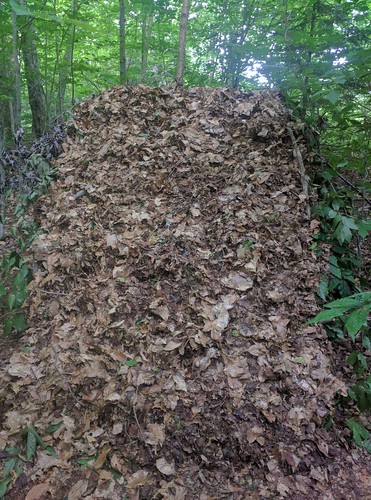 This was surprisingly fast. We're guessing maybe 5 hours? Knowing how to do it though I think we could get what we got done here done in about 3 hours. I was very excited about this. Most shelters I've seen would only be useful on your *second* night out, because generally you spent most of the day getting to where you now want shelter.

We could've easily done it with just one or the other, without much cost to time. The saw would be my first choice in that situation, but the axe would work fine too.

Results
There was a light rain early in the evening and it was working mostly okay, but dripping a little in the middle. After some thought I realized why. Since branches well... branch, the center of the shelter is necessarilly more layered with branches than the edges. I think what happened is that we tried to make it nice and even when we were *done* resulting in a fairly thin layer of leaf-litter over a thick layer of branches in the middle, and a thick layer of leaf-litter over a thin layer of branches on the edges. Thus the edges are more water-proof than the center.

After dark the rain hit *hard*, we're talking serious buckets of rain. After a bit the shelter started leaking all over, it wasn't long before we saw this was not going to cut it and we abandoned the shelter to sleep in the truck like usual. The flaw was predictable... not enough leaf coverage. I've heard before that you need 3 feet of leaf litter. We were hoping the leaf covered branch layer, with all those leaves layed on flat just right to shed water, we could get away with less. That was probably accurate, but not with THAT much less. Another foot might've worked, and 2 more feet would've been a sure thing.

If you've ever built a debris shelter you know how hard it is to gather a lot of material. Initially it goes quickly with the material being right near the shelter, but as you exhaust that resource you go farther and farther afield until you've cleared 50 foot diameter circle around your shelter of leaves, and you're hauling them in from the edges. We spent maybe 1-2 hours covering this shelter with leaves, because of the distance from the shelter this time isn't linear with the amount gathered. So we're looking at about 6 hours hard work (given experience) to get a good shelter. That's on-par with a standard debris shelter... BUT, I don't think we actually had to get as much debris, and the shelter was solidly usable/re-usable by 2 people. The area we were in had a fairly thin layer of leaf litter, and in an area with thick leaf litter you could probably cut the leaf gathering time in half. I'm hopefully this method could yield total construction times of 3-4 hours... but I've yet to test it.

Oh, and lastly... dropping a tree was crucial to making this a relatively fast project. Doing it entirely with deadfall would take a REALLY long time. As it was we were foraging for wood 1/4 mile from our build site. So... pretty cool as a survival technique, but not something you could do routinely while out on trips.

Anyway... this was a pretty fun project. Some of the techniques I'd be very interested to try again.