I just bought a trailer.

This in and of itself isn't that interesting, but I thought it might be interesting to explain why I got a trailer, and how I selected this particular one. 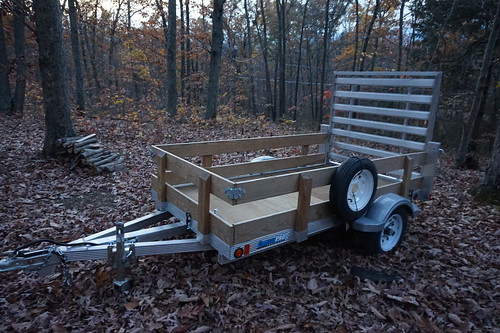 (the wheel on the side is attached via bungee cord, I did that after I got home)

As Jess and I were working on how to acquire wood, we noticed that if we could move it ourselves it would be a lot cheaper. This was kind of my plan from the start. In fact, I originally considered getting a serious tow vehicle, rather than the jeep, but decided to scale it back and see if I could get away with a smaller and cheaper vehicle. I adored having a pickup truck (as you've seen from previous posts) and wasn't about to give mine up without a plan to be able to move *more* than my old pickup, not less.

So, I started looking at trailers with two purposes in mind. The first is just moving "stuff". Furniture, building supplies, whatever. Basically, the stuff I've moved in the pickup in the past. The second is to move firewood, something I would not have done in the bed of our little pickup. The wait capacity of anything short of a full-sized pickup just isn't sufficient (I looked at those a while back, and they are expensive). I *could* do it in a tacoma like ours, but I'd want to reinforce the frame, probably do a different suspension than we have, and we'd still be left trashing the poor clutch on the little 4 cylinder. In short... it would be very hard on it.

Common firewood here is oak, hickory, and  locust. These are all wonderfully dense hardwoods, great for heating. That means a cord of these woods weighs ~4500 lbs, even dry. This should make it a bit more clear why I don't want to do it in the bed of a light pickup.

Given that I was looking for the lightest trailer I could. I'm not going to weigh the wood before I load it - just estimate, so something that won't fail if I accidentally overload it a bit is also important. With my vehicle it's clearly weight that limits how much wood I can haul, not the size of the trailer. For the other purposes I wanted between 4x6 and 5x8 (pickup truck size), just so it's easy to deal with and weighs less. As it happened the trailer place had 4x8 in stock... works for me!

My new trailer has steel wheels and plastic fenders. 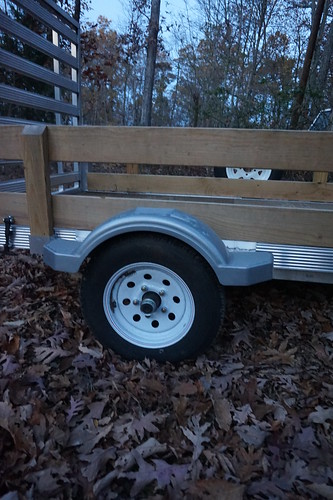 The suspension is something I haven't seen before, a swinging-arm system sprung at the axle. The salesman said the axle is rated to 3000 lbs, thus meeting my "can handle mild overload" requirement. 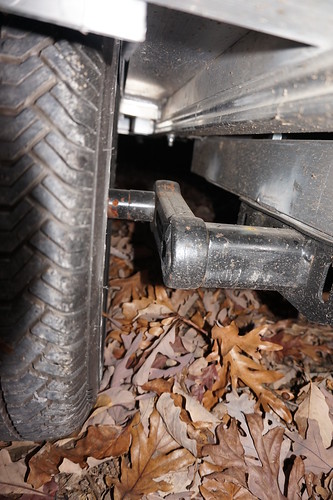 It's also got a wooden deck and sides and aluminum frame. The sides are held on with funky rubber things to reduce rattle I guess. It seems to work, the trailer is surprisingly quiet (well, as judged when pulled behind a soft-top jeep :P). 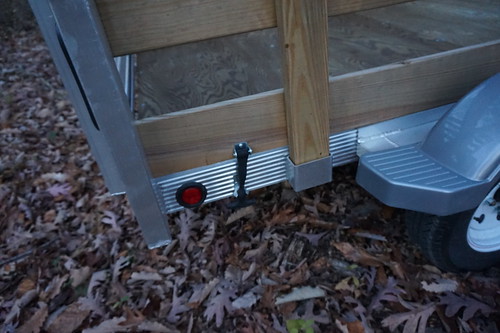 It's ~300 lbs empty and just over a 1 ton GVWR. That's perfect to maximize what I can move with the Jeep. As a bonus, being aluminum, the trailer shouldn't rust. I considered getting something rated a touch higher, but it didn't seem worth the cost and would've reduced my practical load capacity anyway.

It's known that the wrangler's real tow limitation is it's short wheelbase and weight. It just gets squirrely pulling a large load. The engine is absolutely no problem and it doesn't stress the vehicle much at all, the 4 door version with the same engine can do 3500 lbs, and it's limit is still for the same reason. That means pushing near the tow limit shouldn't hurt my car at all. I should note that I expect my wood hauling to be short distances on surface roads, so pushing the squirrely factor hopefully won't a big deal. For other uses it'll be way below capacity anyway, so should be very safe.

My hope is that I can load a bit in the jeep as well as the trailer, and it should actually make the whole thing safer. So with a bit of the wood in the jeep I should be able to haul a thin 1/2 cord of hardwood, or a generous 1/2 cord of softwood. The previous tenent in the house I'm in now burned ~3 cords a winter, so that would be 6 loads. It's a fair number of trips, but sane... unlike say 12 or 18 trips.

The one thing I don't like about it is the giant sail of a rear gate. I got >22mpg on the way up to PA, and about 15mpg on the way back... ouch. To be fair I think I had a tail-wind one way and a head-wind the other, but still. Oh well, I didn't buy it for high-gas-milage, I got it for doing things I can't do without it.

I'm not sure if I'll actually use the trailer to haul wood this year, we'll see, but now I have it so we have the option. I'm sure it will get use hauling all sorts of other things though, and this way I won't have to borrow Jess' truck all the time.