I recently posted a review of the "BOT" bottle/pot http://www.blog.smalladventures.net/2017/06/review-vargo-titanium-bot-bottlepot.html . I liked it a lot, but it had a very significant flaw for my use. The gasket is made if silicone, which doesn't quite fit with the "no synthetics" idea for my gear. So, I decided to try replacing it. 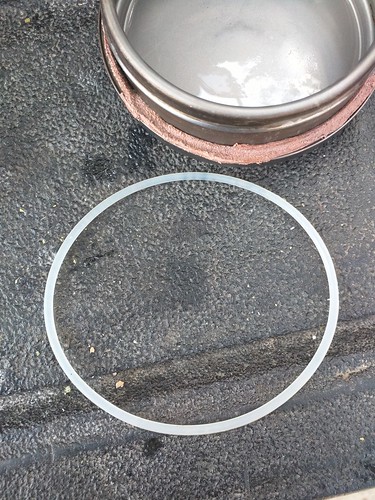 The ring shown here is the original Silicone gasket. On my first try I cut a leather gasket about the size of the top out of some vegtan leather I had in the truck. It immediatly stretched out to the point of uselessness, inches longer than needed. 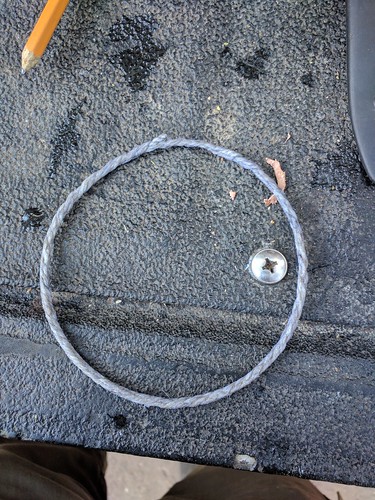 Next I tried using some waxed chord. I first leg-rolled a 2-ply twine from waxed linen. Then I twisted this around itself into a 3-ply (total of 6-ply) closed ring of chordage. This leaked like crazy, it might work if I dipped it in additional wax, but as is it's just too lumpy.

Okay, back to the leather, I tried cutting something quite a bit smaller probably ~1/2" smaller in radius. Then I soaked it in water and stretched it until I could just barely pop it on to the lid. 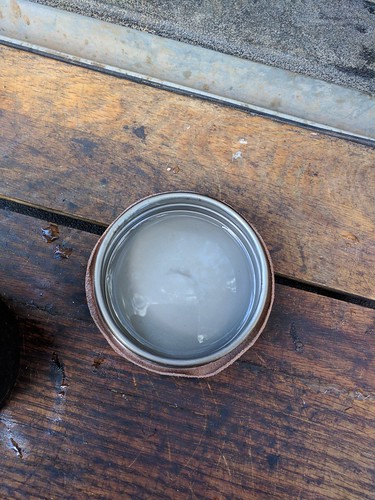 This worked okay at first, but as I've used it it's shaped better to the bottle and worked better and better. The biggest problem is that this bottle is already a little bit difficult to open, and the leather seems to have a higher frictional co-efficient than the silicone did, making the BOT sometimes quite difficult to open. If I'm careful though about how tight I screw it on it seems to be quite usable, and this method would work great for smaller lids. Due to this difficulty though I'm thinking that for thru-hiking I'd rather pick up a dedicated bottle as my second water-container, as that one gets opened and closed many many times a day, and a smaller lid would be easier.

Overall I'm very excited to finally have my first functional water container with no synthetics in it. One more step!

Update:
I've had some time to actually use this quite a bit now.. The gasket definitely leaks a little, but slowly. On a recent hike I failed to screw the lid on quite tight enough and soaked my sweater... but it always drips a little.

Plastic has it's place, for sure, in some cases it really is worthwhile. Part of the point of my project is to figure out where that is... water bottle gaskets is probably one of those places. I'm going to continue using this out of interest, but I wouldn't recommend this method if you can use silicone.