Stone tool in the Whites

While I was doing the presidential traverse, I also found this stone: 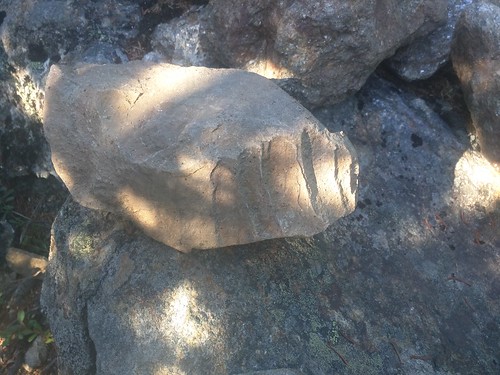 You can see about 5 prismatic blades have been knocked off this stone. This pattern, broken one next to the other in exactly the manner you would use to make a sharp edge, as I understand it, is very unlikely to occur "naturally" meaning, without a deliberate attempt to make a tool by an animal. Given the location (the white mountains) Chimpanzees or similar are pretty unlikely, so I'm going to assume it's Human made.

I'm by no means an expert in this, but it's fun to consider what it might be given what I do know.  The stone is maybe 10" long, so a largish cobble. You can see from the picture that it's a bit granular. The first question is whether the stone or the flakes (the pieces broken off this stone) were what the person was making, or the cobble with a sharp edge was the goal.

It's hard to know. If it's a blade core it's monfacial, and apparently wasn't that great because they stopped before using up much of the stone. I'm more tempted to think that it's actually a hand-axe. It seems large/heavy for that, but it is in the range I'd want to use to cut down a tree.

I just thought it was a neat find, and wanted to share. If anyone has better guesses as to what this artifact is, I'd love to hear.

UPDATE:
I've been reading books on archaeology (as I do occasionally). I hadn't realized how often natural breaks have historically been misidentified as human made even by experienced/trained Archaeologists. That doesn't mean I'm wrong, but it does lower the chances this is actually a human made tool..