The trails around here are just too perfect for it, so I finally went out and got a mountain bike recently. 5 minutes up the hill by car and I'm at some of the best mountain biking I've ever seen, but I have a job and in the evening I want to spend my time on the trails, not climbing that paved hill. IMHO, this is what cars are for. So, I needed a bike-rack. 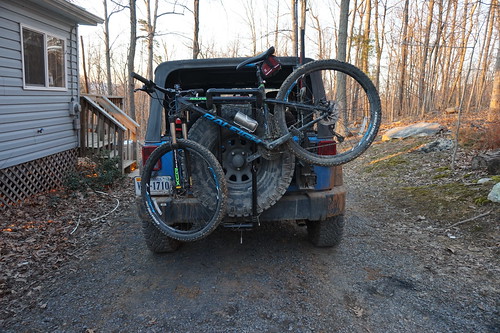 I've got a Jeep wrangler. I wanted to be able to swing the door open without the rack in the way so I didn't want to deal with a hitch rack. This was my plan from the start, and I installed new hinges on my swing gate as one of my first modifications, to accommodate the weight of a bike-rack and bike in addition to the large tire. When I went looking for a tire-mount bike-rack I quickly discovered that a decent tire-mount bike-rack starts around $200. That's insane for what amounts to a couple of aluminum pipes bent in a pipe bender, a bolt or two, a little rubber, and some webbing. I thought about making one and decided eh, I really just want to throw money at this problem and solve it.

But then I started reading more details and found that NO tire-mount bike-racks would fit my 33" spare tire with low backset rim. So, not only would I have to pay $200, but I'd have to modify it even still! That was just too much.

So, one day I went down to home depot (or maybe lowes, whatever) and stared at their pipe selection. I had originally been thinking metal, but when I saw the PVC I realized how much better it would be. It's lighter, easier to cut, easier to bond, and won't scratch the finish on my car, rim, or bike-frame. This means no need for all the complex rubber doodads, no hours of hack-sawing, etc. Perfect. Standing in the store I came up with a somewhat complex design involving a hinged bar that would lock open, like you have on the lid of a trunk, to hold the whole thing rigid. I bought all the stuff I needed for ~$30.0. Beat $200 by quite a lot!

A few days later I grabbed the stuff and just started building. With PVC you can test fit everything which is super helpful. So, I did only the most minimal of sketching and measuring and then just went by eye. I got it half-way built and realized my idea wasn't going to work. The hinged bar sitting at a 43 degree angle between the horizontal and vertical bars was going to hit the bike-frame... duh. Then I looked at what I had and realized it didn't matter. I didn't need the brace at all since the rope hold it at the right angle. I had made the design far more complex than it needed to be. In the end I only used maybe $15 in materials, probably a bit less. I drilled 2 holes in the wrong places, but that's fine..

This evening I finally took it for it's first spin, just over the ridge for a nice evening ride. Because of my bike's very tight frame geometry it's a little bit harder than optimal to get on and off, I have to tip the wheels towards me, seat away from me quite a bit to get it over the "hook" at the end of the bars. Still it's well within reason, and it means it's really secure once it's on, which is awesome. I tied it on, but just for comfort, I didn't really need to since it has to turn almost horizontal to come off. Seems like a fair trade.

So, if you're looking for a cheap bicycle rack, here's a dead simple design you can build in an afternoon. The construction is pretty self-evident from the photos. 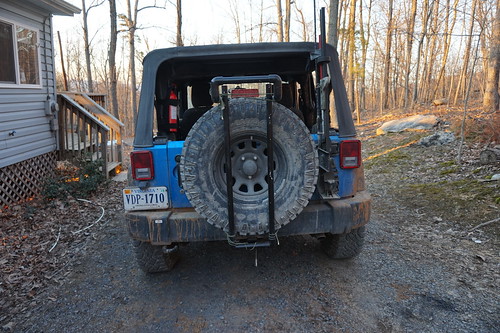 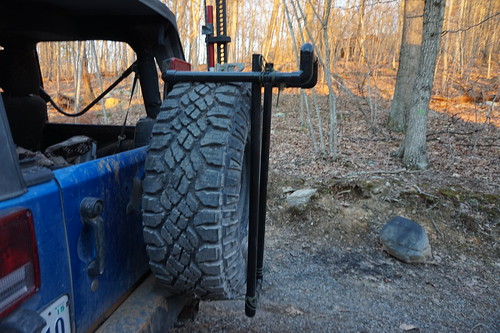 There are a few interesting details though. Note how the top bars sit over the tire so that the rear cross-bar is actually behind the tire. This means the rack is stable and kindof "on the tire" before you even tie it on. That's nice as it makes mounting it really easy. 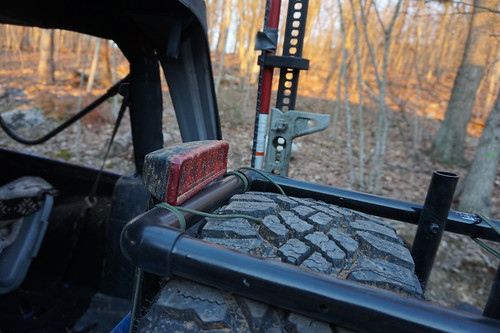 The P-cord holding it on is tied to the top with double constrictor hitches on both sides, effectively making them permanent.

At the bottom under the tire I have an alpine butterfly in each side that I use kindof like a truckers hitch to help me get it tight, then I just tie it off with 2 half-hitches.

If you've never glued PVC together you may want to look it up. Note that I test fit everything and then knocked it back apart with a hammer. For the final fitting after gluing I also knocked it together with a hammer. Be careful as PVC can shatter, I did in fact shatter one elbow, a rubber mallot or a block of wood between the hammer and PVC may be in order. To actually glue it you use 2 different products. First you use a prep, then a glue. I used these 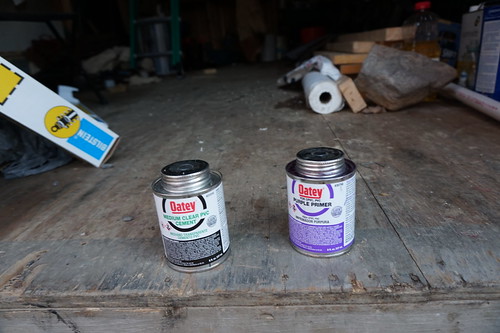 Note the of the materials in that picture, one is purple. It tends to run all over. So now I have white pipe with purple streaks covered in mud. Fine, and functional, but I decided it was worth a tiny bit of effort to make it not super ugly.

Most paint won't stick to PVC. I went to a hardware store and simply asked what would work and they pointed me at this stuff. It seems to have bonded okay, we'll see in a few weeks. I spent as much time painting it as I did building it. I did a lot of coats trying to get good coverage. 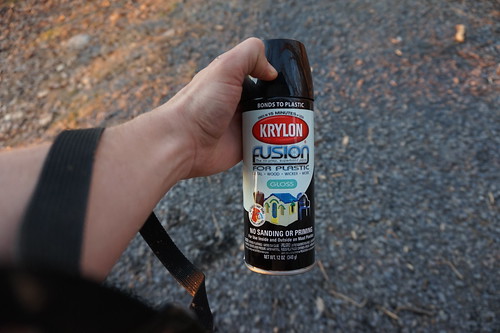 Oh, one more heads up. Note that I'm a small person, my bike has a tight geometry, and it's a 650b (meaning not that large of wheels). My bike's rear wheel comes out flush with the right fender. A bike with a more horizontal top-tube would have less trouble with this, but that gets offset by larger bikes or bikes with more open geometries. This property is not particular to my rack design at all and is relevant for any rack carrying bikes cross-ways on the vehicle, but it's a consideration. I personally hate having stuff hanging out to catch on trees and the like. So think it through for your bike and your vehicle. One advantage of making things yourself is you can make them custom for your needs.

No doubt I should throw some legal disclaimer in here to not be an idiot, bla bla bla... So... you know, be careful and try not have your bike and/or rack fall off your car, it'd be embarrassing. If you don't know knots, maybe use truck tie down straps or something.

So, there you go. A functional bike-rack for ~$15 bucks. Makes you wonder how they get away with charging so much doesn't it?