Reasons to camp with a 4x4

We'd been hanging out around Creede Colorado, but the truck has been acting up... pulling right a little under braking. Long story there, but anyway, we needed to head over to Durango where we'd found a shop with really good reviews we hoped could figure it out (they are actually working on it right now).

While in Paragosa Springs a very helpful man had given us a bunch of tips for cool places to check out in Colorado, he'd highlighted a bunch of pretty routes, including the "Alpine Loop", but said you really need a jeep to do it. When I mentioned we had a lifted pickup he said "so?".

Well, without realizing it we accidentally planned the route from Creede to Durango to take this Alpine Loop. When we realized it we talked a bit and decided to heck with it... why not give it a try? We can always turn around.

Well, we made it through. 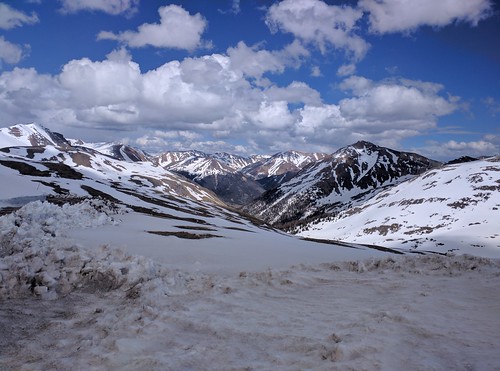 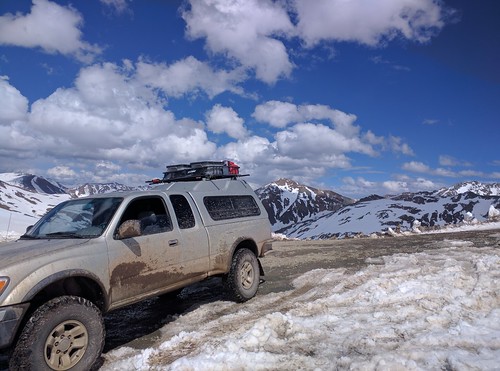 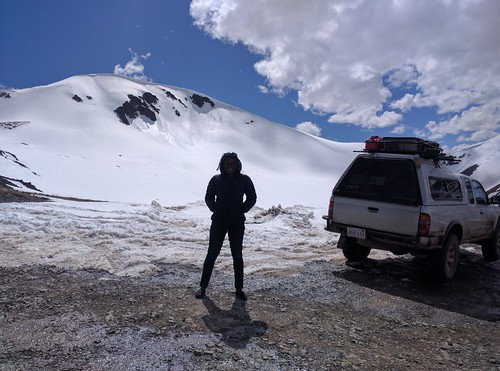 The photos above are from the top of Cinnamon Pass. Jack did great: http://www.blog.smalladventures.net/2016/02/jack2-another-toyota-tacoma.html

Not only did we make it, but it wasn't actually even hard. The views were just incredible the entire way. It turns out the northern side of the loop was closed due to a recent avalanche that covered over the road, actually another road we tried to take out was also closed (it took a couple of tries to find a route down to normal surface roads again).

In that hunting for an exit I ended up backing probably 500 yards down a steep hill on single-track with a vertical drop-off to the left... I was VERY glad I did not have a trailer. Similarly, had a wide camper on the back, I would have been very nervous about being that close to the edge. Keeping things tight in a single small off-road capable vehicle makes a huge difference to getting out to cool places.

So, we got to our destination by about the prettiest route possible... Now we want to come back and do the northern half too!

This is one example of many. Here's the view from another campsite we stayed at recently, around 9500 feet, and down a long rough dirt road with mud holes (this site is actually the reason Jack is covered in mud in the photos above). 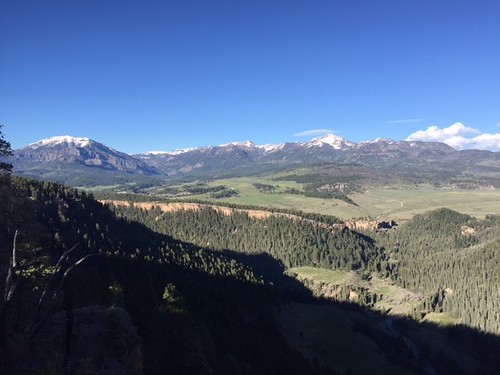 We used the fact that the truck had 4-wheel drive and a lift occasionally out east, but overall it seemed a little extravagant. Since about Texas though we use it pretty much daily. A good half of our camp-sites have been down 4x4-only roads. Low range makes a huge difference when using reverse to maneuver to park in campsites, as well as on extremely steep dirt-road climbs over 10k feet where the engine loses torque. The lift has been critical both for large rocks in the road, and for break-over angle on a lot of trails we camp on. An unlifted truck could probably do a lot of what we've done, but not day after day, solo.

Our trip would be a lot less remote, a lot less private, and a lot less fun with a less capable vehicle.