After a quick stop in Pennsylvania to visit Angie's friends we went out to Seneca rocks for some climbing... or well, mostly for camping in the rain. We used the experience to learn a bit more about comfortably car camping in the rain - something I've done with my parents, but not spent much time developing a system for myself (since when I did a lot of car camping, and had a car, I lived in CA, where it doesn't rain)

Here's what we've found to work best so far: 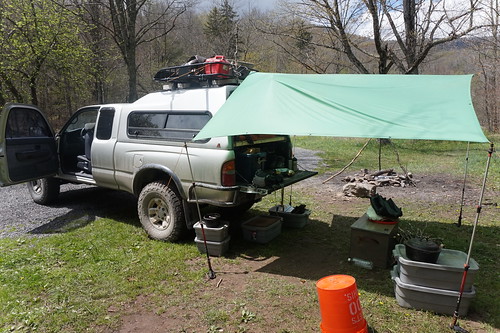 We tied the center to the back of  roof basket, then the other end of the ridgeline is tied to a tree using a length of line.

Next we take angie and my hiking poles, extend them to full length, and place these at each corner (This was actually Angie's idea, and it's great, it saves a lot of hunting for sticks). My old tarp (this is the one I used on the AT), has loops tied on each corner already, so these simply go over the ends of the poles, then a line is tied from there out to the ground at a 135 degrees from either edge of the tarp (pulling away from the center of the tarp). This tar is siloconized... or maybe I should say "was" siliconized, and could use another treatment, but it still worked fine, except where the back window touched it causing it to drip a little. 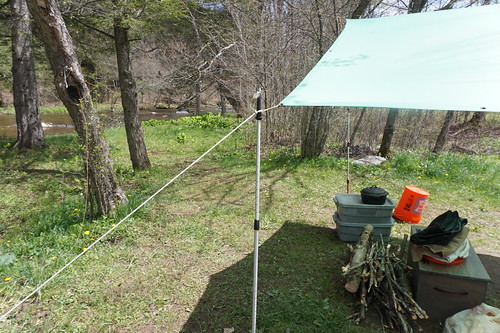 Note that with what is shown in this picture the tarp will fill with water and collapse (which it nearly did actually). To complete the pitch tie the middle of the two edges to the ground with line, pulling down and out from the center of the tarp (just like the ones on the poles, but without poles). This creates "drains" where the water can escape the edge of the tarp.

I'm going to call this the "house" pitch. In essence it is nothing but my favorite backpacking pitch (the pup-tent pitch as I usually call it), but up on poles. 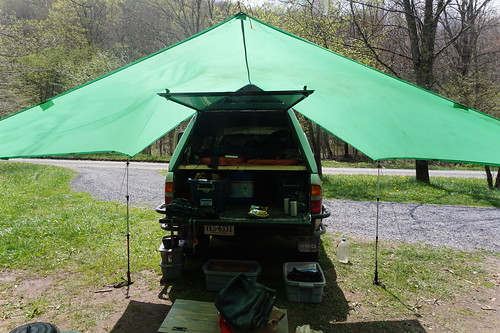 Because of the placement directly over the back of the truck, if we get it tight enough and square enough to the truck we can leave the rear window and tailgate open and get only the most minor of dripping. This is great, because it means accessing our stuff and getting in and out doesn't get everything wet!

This was the second tarp pitch we tried. The first was down the length of one side of the truck, tying to the rack at one end and to a stick or just over the cab on the other, then using the poles for the other 2 corners. That pitch worked fine, but didn't cover the back entrance. At one point someone (probably me) left the back open for a bit in a light rain and the open cell foam mattress we were using got soaked... That mattress got trashed as a result. I'd always heard open cell foam was a bad idea, now I've seen it in action.
I'm going to call this pitch the "awning" pitch.It's fundamentally a lean-to pitch on poles.

The other problem is just that due to the dimensionality of the tarp the space was kind of hard to use. I think because the tarp ends up folded along the long instead of the short axis, the resulting space is more long and skinny. It's also lower overall. In the house pitch the center of the tarp is the highest point, so the part of the tarp that stays dry also lets you stand up. In the "awning" pitch the highest part is up against the truck, where you get drips down the truck all the time, and where you can't stand ('cause there's a truck there).

Using the house pitch made our time in the rain a LOT more comfortable. We were able to use the wooden box you see in the center as a chair or table. We could prepare food for cooking, and eat it, without being rained on. We were still cooking on the fire in the background, but it's just a short run out in the rain to fiddle with it. My tarp is an 8x10, and I did find myself wishing for a 10x12 (we have one, but it's on the trailer right now), so I'm curious to give that a try in the future.