Angie and I went backpacking in the Gila National Forest in New Mexico. Getting out there was pretty intense... We cleared quite a few trees with the truck getting to the trailhead where we started.

We went backpacking with food for 4 days, unsure how things would go. We hiked down to the middle fork of the Gila, then down the river a couple of miles and slept on the beach. We quickly realized the going down the Gila was WAY too slow to make our original plans, so modified our loop to take a small canyon up and loop back around to some dirt roads.

Since we camped on the shore of the Gila both nights, there was plenty of sand. I was using my alpaca sleepingbag, and figured it was the perfect opportunity to finally try this technique I've read about so much.

First, I dug a pit about 6" deep. I would advise targetting 8", I'll explain why soon. 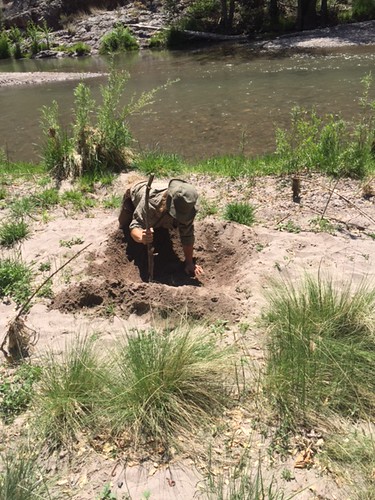 Then we lit a fire in the pit, and used it to cook our dinner, etc. 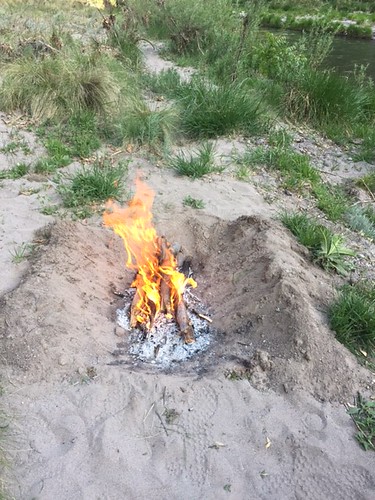 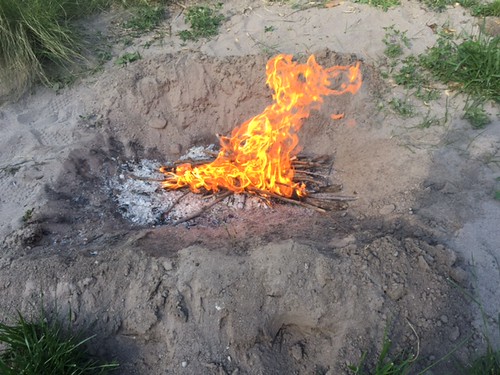 It was too dark when we put the fire out and buried it, so no good pictures there. But basically we kept it going until it was time to go to bed, then let it burn down to coals, and carefully buried it in the sand I have piled on the sides of the pit in these photos... making sure the coals didn't end up too far up in the sand.

Then, I curled up on it in my alpaca bag and went to sleep... it was very warm.

Partway though the night I had to shift a bit due to some hot-spots that were uncomfortably warm, and that I was afraid would damage the fur. The hot spots take a while to build up and reach peak temperature. This is the reason 8" would probably be better, you need a decent amount of material between you and the coals to distribute the heat properly. I had this problem both nights actually, as the second night I hadn't even planned to do this, and then I figured hey, we had a fire why not?

I will say though that it was very cozy, and was still warm come morning. In this way it was far superior to sleeping next to a fire, where you have to keep the firing going all night, and if you fall in to a deep sleep for several hours it's likely to be out when you wake up.

All in all I would definitely do this again, but digging the pit is hard, so it's a technique for loose ground only. Only useful sometimes, but a great strategy to have in your arsenal for dealing with using a little less gear.

Note: I did not use rocks in the pit, I figured sand is already rocks and would hold the heat, and rocks can sometimes explode. Rocks would help hold the heat if the pit were in loam, but in sand they just add unneeded risk.