Directly after the SAR conference in southern VA, Jess and I continued south toward Georgia (stopping for a night to sleep at a nice trail-head in her truck Jane). Actually, as it happened we ended up in Damascus, a town neither of us has been in since we hiked through it on the AT in 2009, and hitched to and from 2 weeks prior to go to trail days, a big backpacker party held there every year. Anyway, it was nastalgic and fun to drop by again.

Anyway, onwards we continued to Rivercane Rondezvous. This is a primitive skills gathering, actually the oldest continuous running primitive skills gathering (this was it's 30'th anniversary). I went to it's sister gathering Falling Leaves in the fall, run by the same EarthSkills folks. I saw a couple of faces I know from the west coast gatherings actually, a lot more I met in the fall, and met plenty of new people as well. 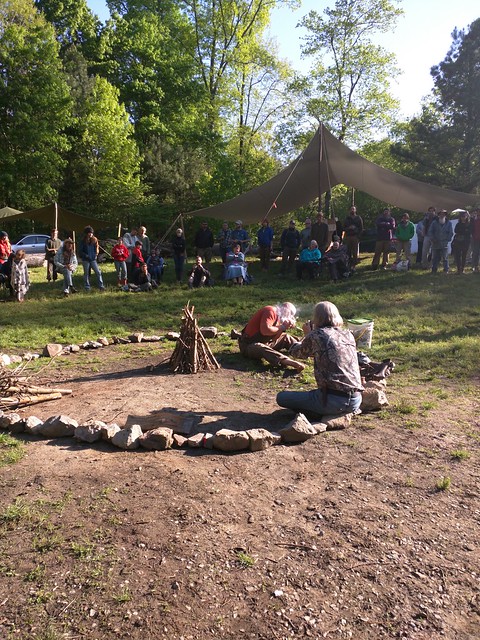 As we've mentioned before, these gatherings focus around primitive skills generally with two different ideas in mind.

One is to understand how people used to do things, by trying to do them yourself. This is called Experimental Archaeology. If archaeologists often find tools and come up with theories for how those tools were used. Surprisingly these theories are rarely tested by actually trying to do it, and seeing if a) it works and b) it leaves the same marks on the tool or whatever the tool is used on as the historical artifact. People 10,000 years ago were no dumber than us now (probably smarter actually), so you can bet they found reasonable ways to solve their problems. This can be a pretty interesting aspect as people fiddle and around and try and figure out how things used to be done.

The other is simply to actually do them. Many people who come to these gatherings have an interest in gaining the skills themselves, keeping them alive, passing them on, and actually using them. I'm fascinated by experimental archaeology, but for me it's mostly a secondary.interest compared to understanding how I can actually do things now. The two naturally feed in to each other of course, if we can't get the tool to work the way we expect quickly and efficiently now, it's pretty reasonable to assume we've missed something, and chances are they had a good method so if we can figure it out I'm pretty interested in using it now.

Hickory day
I've made 2 bows in the past, both from bow-staves someone else cut and split out of a tree. The first class I went with was on felling and splitting bow-staves out of a tree. They had already dropped the hickory tree (something I've done before), but we talked about that some. Particularly safety, and how to choose the right tree both for the ecology of the forest so as to make the forest healthier by cutting, and for making good bows. We talked a lot about the way to split the wood so as to maximize the good bow-staves we get out of it, and then actually split them out.

There was some wood left though that was no good for bow-staves. So that afternoon I decided to use it. I went back. Using a folding saw and an axe I cut out two hickory splitting wedges. I then used those to split out some short tool handles for some hammer and hatchet heads I got at a garage sale a while back. 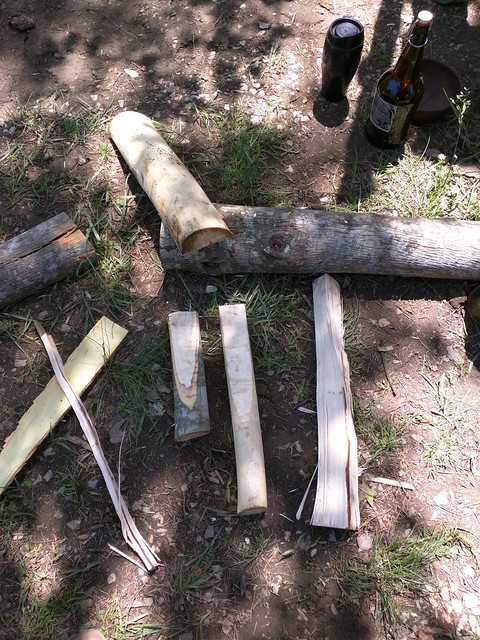 I'm letting those handles cure now, but there are few things more satisfying than going in to the forest with an axe and saw, making the other tools you need, and leaving with tool handles.

I also grabbed another hunk of tree to make a sledge. It's quite dangerous to hit metal with metal, and always better to hit metal with wood or wood with metal if that can get the job done. For this reason wooden hammers are really useful (also, they are free). So since I had a tree sitting there, I decided to make one. Here's a picture of my lovely friend posing with it (not quite complete) and a coyote fur. 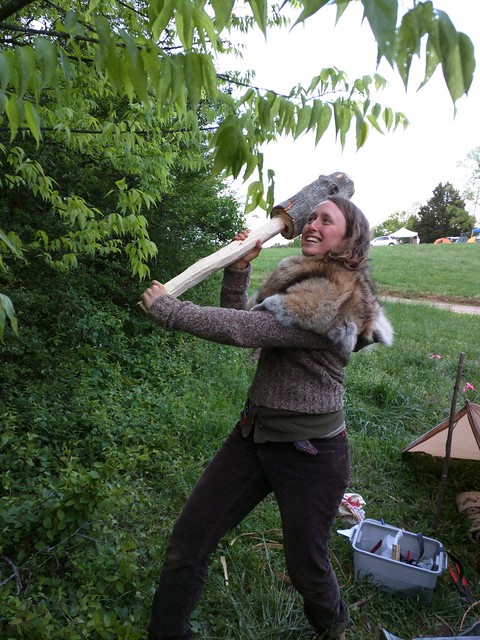 Well, I had to pull the bark off the handle to make this, and hickory bark is extremely useful flexible stuff, so I took this and bent it to make a basket. After 3 attempts at this (and 3 chunks of mucked up bark) and a little advice from others, I finally got it to work. I then took some long pieces, peeled the outer bark off, them, and used the inner bark for rings inside and outside the top, too bind those rings in to place, and to sew up the sides. Sadly I didn't take a picture of it though, and I traded it away at the trade blanket the next evening, so here is a picture of a similar basket I found online... Sorry to whoever owns the photo.

If you haven't gathered this yet, hickory is a really cool tree, being a great wood for bows, handles, baskets, and bindings.

The hickory basket, the splitting, or the sledge could all be individual posts, and may be eventually. There's a lot to talk about there.

We had a super cool guest come to this gathering, Samuel Thayer. Jess and I have long been fans of his edible plant books, and of the 5 or so books I kept while living in the truck, two of them were his, so it was quite exciting to go on a plant walk with him. We were both fan-girling and squeeing a bit OMG!

I learned a bunch of new plants. I wasn't aware, for example, that you can live off of slipper elm bark! Crazy! Green briar tips are delicious. Mulberry leaves are tasty when young. False nettle is delicious. The best part of bur-dock root is the middle third. Etc. We also bought some delicious dark maple syrup from him... awesome!

This is embarrassing to say, but I didn't know how to sharpen knives and axes before this gathering. I *thought* I knew, but the simplicity and speed with which a friend and instructor taught me to sharpen tools was amazing. I just ordered a new set of diamond stones, and I'm really looking forward to having all of my tools perfectly honed and stroped. Maybe I'll write a post about sharpening at some point. I screwed up while trying to split out some wedges for wedging handles in to tools and buried my wonderful gransfurs brux axe in the mud, UGH! He had it sharper than it was when I got it in about 5 minutes.

In my last post I talked about track aging, and how I wasn't as good at it as I wanted to be, so I decided to practice. I boxed off an area so others wouldn't step on it, then layed down about a track a day, tracking exactly when I layed down each track, and the weather. This way I could go back and stare at the tracks and try and set in my head what tracks of various ages look like after particular weather patterns, at least for this particular soil and vegitation. It was really really interesting. If you look hard you can pick out the ping tracking tape I tied to the sticks at the first print of each track. Each print was marked with a stick at the heal for the whole track, so I can find them again easily. 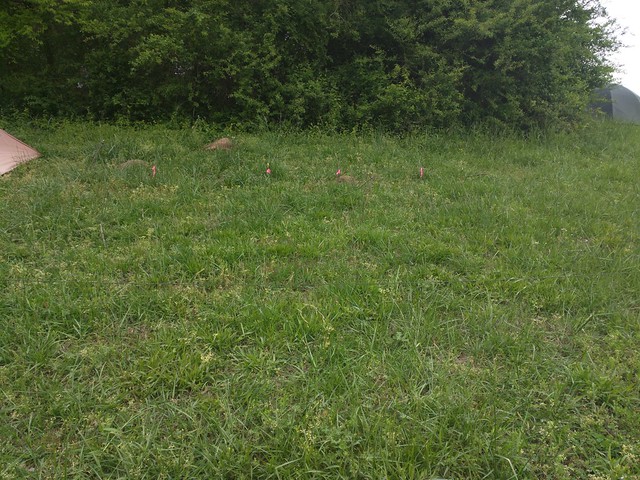 Tree Climbing
One of the instructors trims trees as a side-job sometimes. I happened to wander by and saw their climbing setup that was basically a mitchel rig using prussiks. I had to break out my frog rig using prussiks and share how that worked. He then taught me how to ascend into a tree using only 1 rope and no other gear at all.

One of the instructors had recently been to Africa, hanging out with the Bacca and the Bantu peoples. Despite problematic language and cultural barriers he learned 2 interesting trap sets that no-one in the US seemed to have ever seen before. One of them in particular is amazingly simple and elegant allowing these people's to live trap animals as large as deer without dangerous deadfall traps. It's elegance rivels the promontory peg or the Paiute dead-fall trap. Amazing! 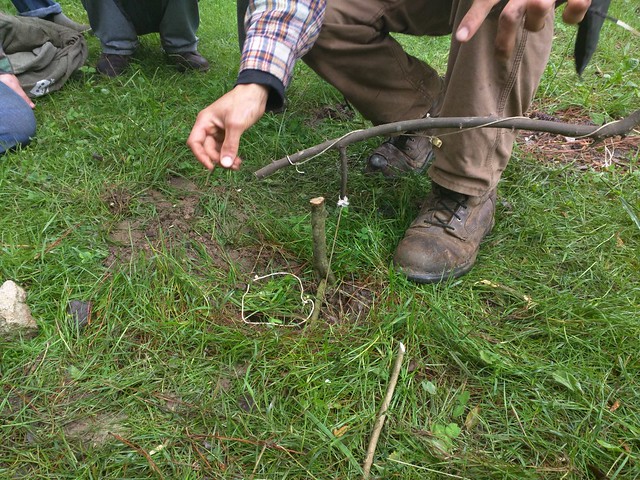 This trap is based on a springpole. I don't think this information exists on the internet at all, so I'll try and do a write-up of this trap sometime soon, maybe I can make a set and take really detailed pictures of it. .

I took a class in building a debris shelter. I was hoping to pick up more tips on sleeping out without gear in colder weather, e.g. below 40F. It turns out the instructor hadn't done this. Still, we built a debris hut and I picked up some tricks to help keep a debris shelter dry enough to really sleep in, like keeping the sticks you lean against the main limb from going above that limb, so they don't catch rain-water and funnel it in to the shelter. Sadly, I didn't get quite enough leaves on it to sleep in it in the rain-storm that followed as there were other things to run off and do by then, but I'd be a lot more confident trying it now..

Music
In the evenings people would party, dance around the fire, and play music. I had my guitar and had a great time jamming with various folks. Jamming has never been my strong suit, but you've got to learn somehow! It took me a while to find the spots around camp with the right vibe, but it happened eventually. It'll be easier next year.Awesome awesome people.

Tree down, OH NO!
This hickory tree fell on a friend's camp, and on their tent, in the middle of the night! As luck would have it they were out of the tent right at that moment, and they weren't killed, but it was scary. Amazingly the tree looks perfectly healthy. The camp at large harvested the tree for wood and bark, as it was a wonderful... ah... windfall if you will. 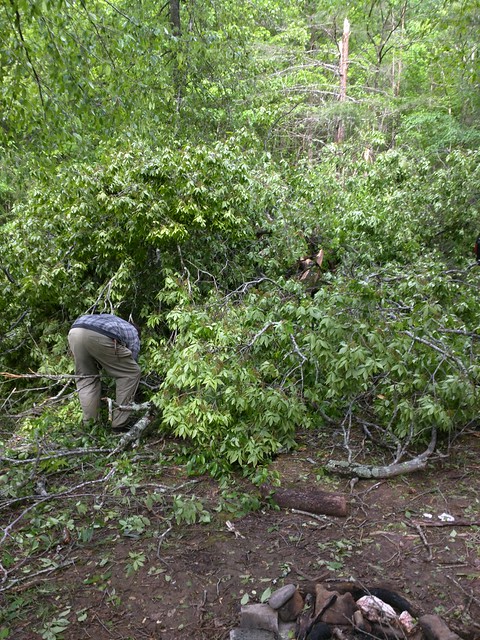 Jess and I have some bark in the garage that we harvested off of it actually, for doing bindings on projects in the future. I'm really glad my friend was okay. 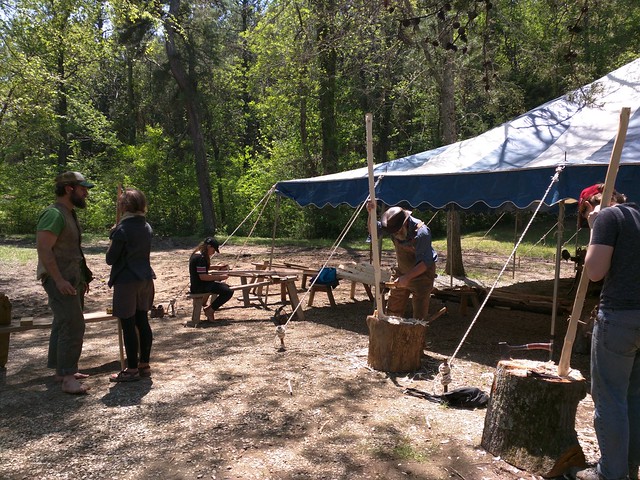 The big field near the entrance. That TeePee in this photo was made by the owner, who's also an instructor. She taught me a bit about TeePee Poles, and pitching TeePees. 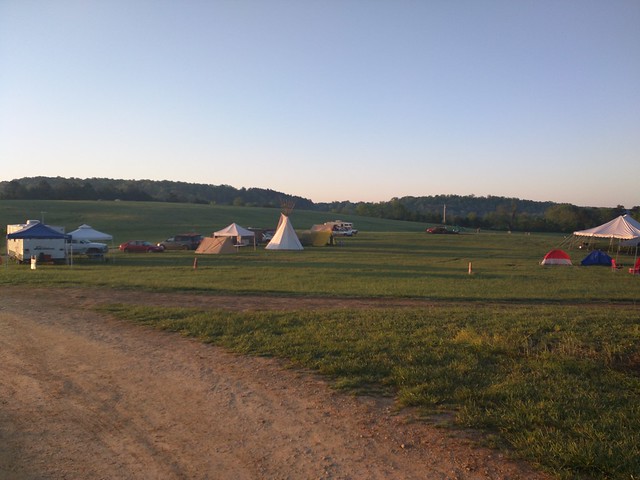 Our camp, including my tarp made of a sheet and linseed oil, posted on this blog a little while ago. I only slept in it part of the time, as there was an ant mound far too close by. 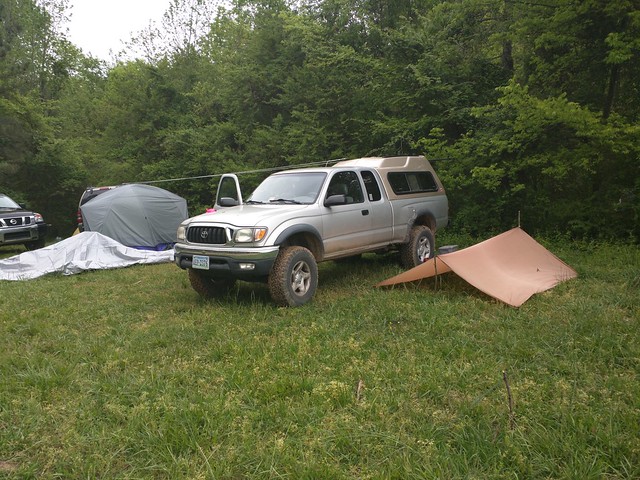 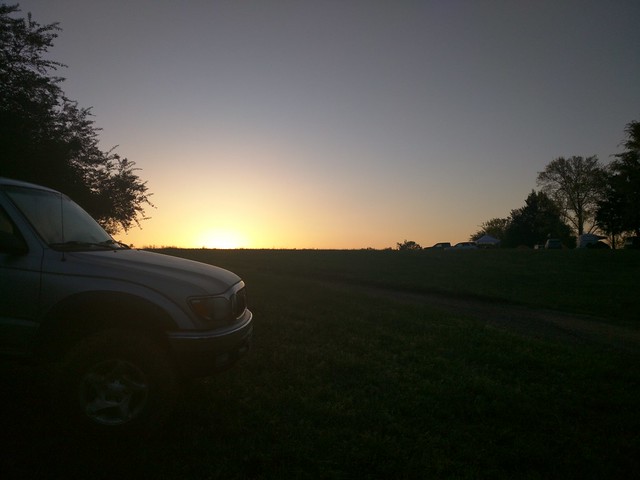 Conclusion
This is only a tiny taste of the goings on at a gathering of this sort. Every time I go I learn new things, and more important I get inspired with a whole new set of ideas about what to try and go do, and how little it takes to live happily.