I inherited two chairs, both partially broken. The chair frame were solid, but the several of the slats in the seats were broken. As luck would have it I was able to build one complete chair-seat using the two existing ones. Then came how to make a seat for the other one.

I have no idea how this is normally done, but rather than look it up I decided to try my own idea. I had some 7 ounce canvas from my tarp experiments. I also had grommets, and 550 paracord. My idea was to make a canvas seat, laced on the bottom, and that's about what I got: 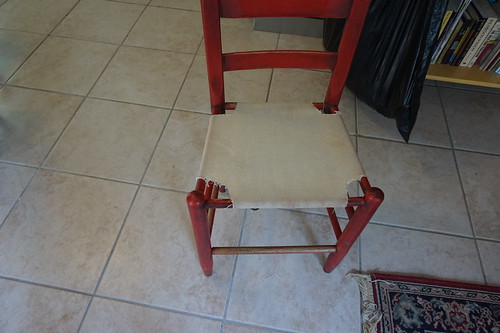 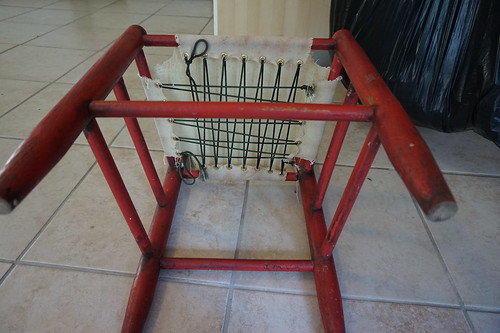 It took me two tries to cut the right shape. I was WAY too lazy the first time. Second time I measured much more carefully, then checked it against the feet of the chair as a sanity check. Based on that I caught several measuring mistakes. I did a test fitting actually before putting in all the grommets (it's a lot of grommets). Here's what that looked like: 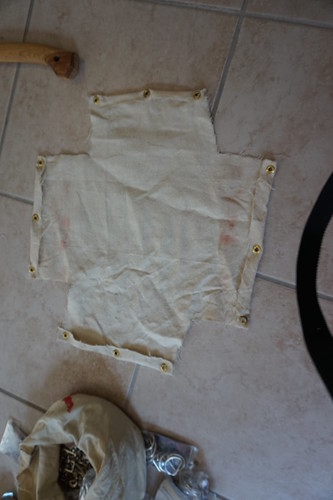 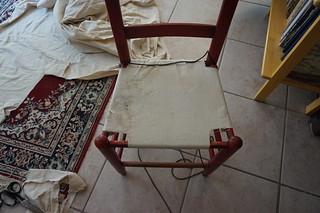 Notice all the dirt on the seat. Before the final fitting I soaked it for a while in some non-chlorine bleach and warm water to get the stains out. I mounted it wet, As it dries it should also shrink a little helping with the fit.

Besides cutting the right shape there as only one tricky setp to this project. The grommets are not totally trivial. This fabric is a very loose weave, so it turns out you can push the fibers out of the way rather than breaking any, this should help retain the strength. But, it's hard to get the grommet between the threads. To solve this I discovered if I used my elk-bone awl to create the hole, I could slide the grommet up on to the bone-awl, and just work the threads off the awl and down over the grommet. Here's a series of pictures to help. 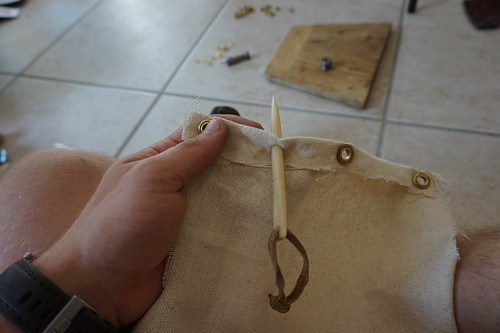 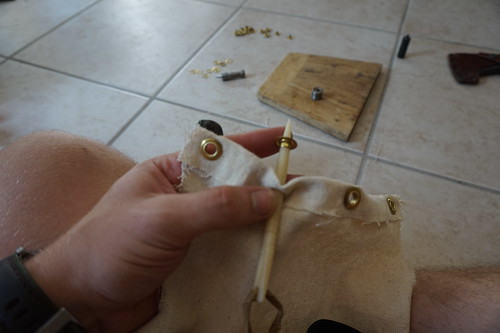 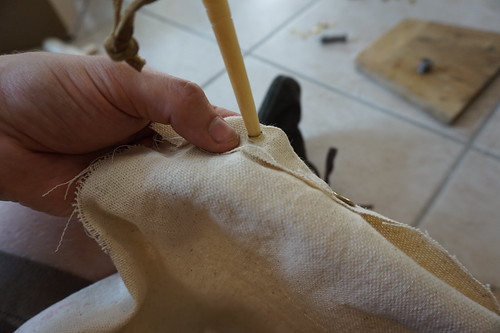 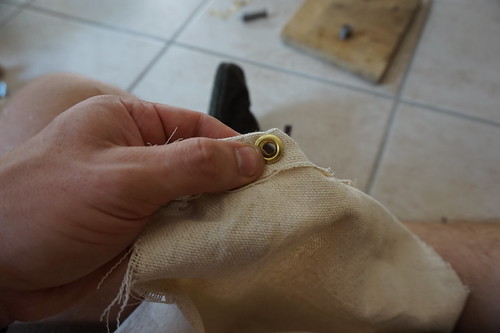 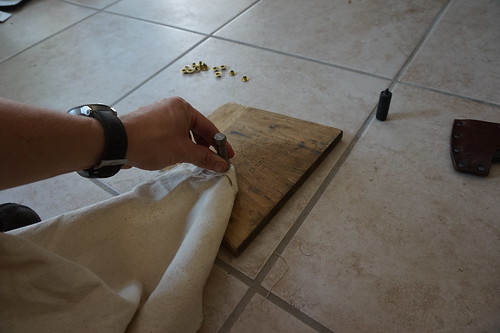 After I had these locked in I actually finished setting them all out on the deck, as hammering that hard might shatter a tile.

Overall I'm pretty happy with the result. The unfinished edge on the corners is a little rough, and may shorten it's lifespan. If I do it again I'll see about finishing those. I can crank it pretty tight, and I expect it'll take a couple of tightenings before it really stays taught. A tight as I can crank it though it seems good enough for my somewhat indelicate rear :P. I'm very curious to see how well it holds up.

Tore out one grommet in the back trying to crank it really tight. This canvas can't hold up to that kind of abuse. It's at the back-side where it doesn't get much stress during use, so I faked a hacky repair (just wrapped over the chair frame instead and skipped that grommet). It may just be that the canvas is too weak, but I'm going to wait and see.

Oh also, you can definitely feel the front bar, it's still usable, but definitely not as nice as the slat-seat of the other chair.