Well, I got a Jeep. You don't get a Jeep so you can keep it stock. I'm starting easy.

Part of why I got a Jeep is so I would learn more about cars. The stuff here is the super-easy not-too-educational stuff, but you gotta start somewhere.

I didn't buy a hitch on my jeep when I got it. At the time I thought I'd get a bumper with one built in. Anyway, this was $55 on amazon, including wiring harness. 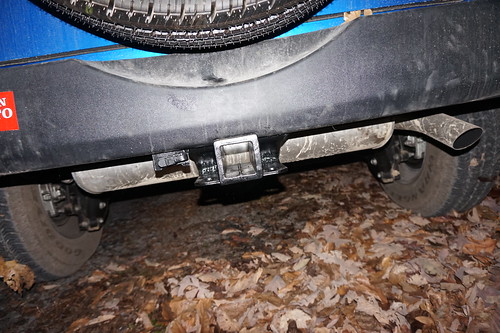 To mount it you just pull the bumper and bolt it on. The wiring harness (like most) is just a jumper that takes off from the plug on the left-side tail light. I've been spraying more undercoating whenever I expose a new part of the Jeep and this was no exception. 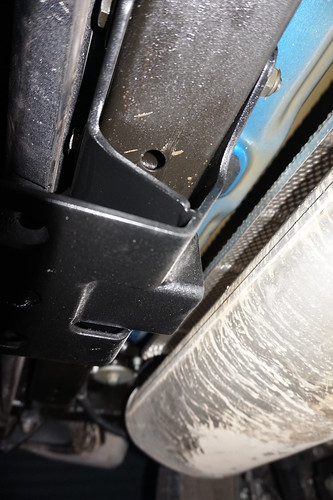 The well known mirror drain mod turns out to be unnecessary on the 2015 Wrangler. I drilled it first. Later I removed the mirror to use to look up our chimney (we didn't have any other mirror in the house, I guess I don't touch up my makeup enough). Apon inspection they've added a notch to the gasket and set it up so it seems to drain properly. It's been raining a lot and there was no water in it when I drilled it, or when I pulled it off. 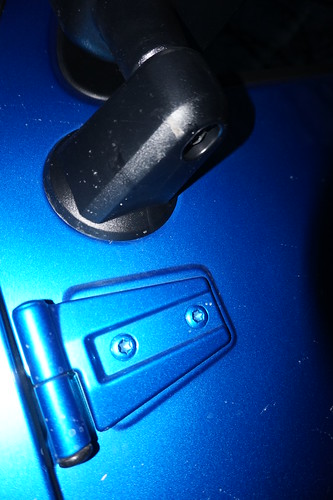 Chrysler, in their infinite wisdom, didn't put drain holes in virtually anything but the main tub. I went through and added them to the plastic tray in the back: 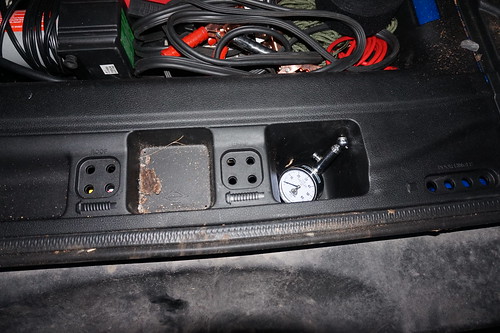 I unplugged the doors a while ago to so it doesn't "ding" when they are open. I hate that feature in all cars, and carefully broke it in the Tacoma as well.

Lastly, I have no pictures for this, but I purchased a flash-cal. This lets you tweak the computer in a number of interesting ways. Some are only relevent to automatics, but a bunch are useful. I adjusted the front lights so I can use highbeams and fog-lights at the same time (I mean, why would you interlock those in the first place?) I tweaked the front-light timeout which for some reason applies when you turn the car off and then turn the lights off (ANNOYING!). I set it to one second so this doesn't matter. I tweaked the one-touch turn-signal, which again drove me nuts. I hate things with timeouts like that, let me flip a switch on, and then off.

Annoyingly it wouldn't let me adjust the stereo timeout. The stereo keeps playing after I turn the ACC off and then turns itself off about a minute later. I find this rather annoying. I'd much rather it just switched off instantly. Oh well. I suspect there's an update that would let me do it, but I haven't gotten the update software to run under wine yet (windows installer DLL hell).

The original impetus for purchasing the flashcal was so I could fix the TPMS and speedo when I upsize my tires (current plan is 33"). I already tweaked the TPMS so it won't complain until I'm below 20 PSI. I'd rather go on handling and watching the tires carefully than a light anyway. You may notice the tire guage in the last picture.

I've got lots more planned. I'm just doing the super-easy stuff first. I already have a kit for relocating the vacuum pump, but haven't gotten up the gumption and a couple consecutive days where I'm willing to break my daily driver.