The term "lithics" refers to human made stone tools. The more colloquial term for this would be "arrow heads", though many of the tools often called such aren't actually for arrows at all.


Anyway, I was talking to my grandmother over thanksgiving and she mentioned that she had a small collection of arrowheads. When she was a little girl in  she used to gather them on her parent's ranch. So, the collection is all from a single area. My grandma is in her 90s, she probably gathered these when she was ~10 so about 80 years ago. It's 2015, so that's ~1935 give or take a few.

I expressed some excitement at this and starting asking questions about them, and she gave them to me! So, here's the collection, both sides of each piece. 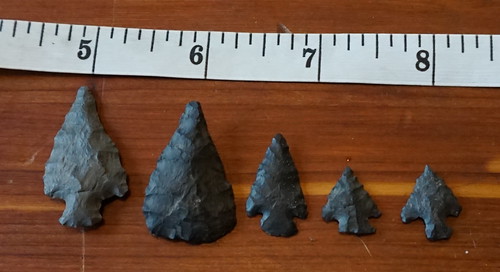 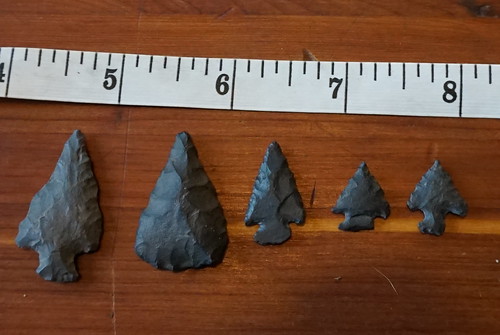 I am a novice flint-knapper for sure, so don't take this as coming from an expert. But, I 've broken a few rocks, and talked to expects and I do see a little bit more than just some arrow points here. So, let me explain what I see, so you can start trying to see things in points yourself.

The most striking thing is how small some of these points are.The smallest being only about a half inch across. She said there were larger ones in the collection, but lets talk about these little ones for a moment.

Small "arrow" points like this have been found basically everywhere on every continent. It was believed for a while that the pieces found in Egypt were "ceremonial". There are very clear exceptions, but anyone who's studies a bit of archaeology should get suspicious when they hear that... especially when the item appears virtually everywhere in the world.

A couple experimental archaeology experts I know are pushing the theory that these are in fact tips for blow-gun darts. This theory comes in part from a historical trend of ignoring everything but lithics at archeological sites, it's only relatively recently that organic matter (e.g. what might remain of a blowgun) would even have a chance of being found. Unlike a bow though a blow-gun is much harder to identify.

These are also made out of a pretty hard chert. This is a perfect "tool" chert, it doesn't make the absolute sharpest points, but they'll hold an edge for much longer. This is an ideal stone for making axes, drills, etc. that will see heavy use.

Now, lets talk a little about how these particular points were made. For comparison lets look at some other points. These points were both made by friends of mine. 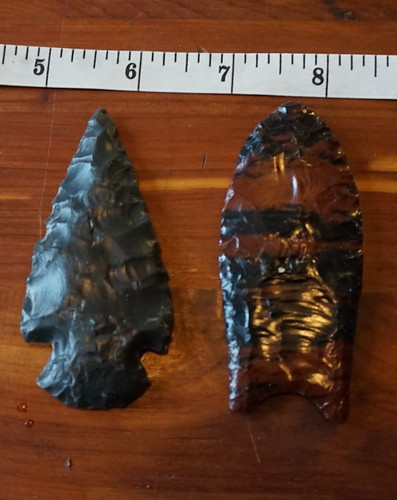 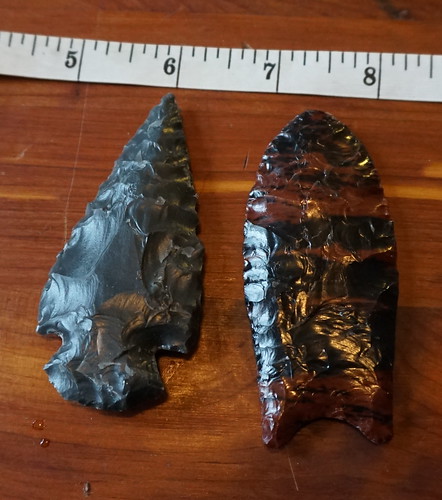 Both of these are made with obsidian. Note how much shiner they look. These points are going to be somewhat sharper, but also a little bit more fragile. When looking at how the stone is knapped this is something to take into account. The more fragile stone tends to be more "perfect" so it breaks a little more like you expect, but it also shatters more easily so you need good support for each break. It also simply takes less force to break.

In flintknapping your goal is to break off a perfect flake, and not have extra energy around to break anything else. If the flake snaps in half, it generally means you were just a little off. Now this isn't just about how much energy you use, it's also about directing it. You want the energy you do put into the stone to get carried just along the path you direct it to, not anywhere else. To direct that energy you need enough stone in the right places that it doesn't just crush instead, it has to carry the shock-wave without failing itself.

Okay now look at these two stones again. You may notice some interesting differences (besides their basic shape). The right piece is actually quite irregular. Remember that it's a reproduction. It is believed that cloves points were made large and resharpened repeatedly, as they got smaller they'd be used for different tasks. Part of why it looks more "random" is that this sharpening process puts more faces on the stone, and can't just be done by wrote. You read the stone depending on where it broke etc.

Despite the irregularity look at that edge, the final sharpening was done in a very very regular way. They walked down the edge and just knicked off a little piece at each spot. This would've taken the master knapper of couple of minutes. Also look at the breaks and find the longest continuous groove you can on the piece, the higher the ratio of length to width the harder the break was to do. A master does these with ease, the novice will botch them regularly.

Look at the spots where a break "scooped" up and out of the rock. You'll also see curved ridging running crossways across the break (parallel with the edge of the piece, the perpendicular riding is seperate breaks). These are generally spots where the person hit hard, and shot a little low (contrary to some experts it doesn't have to be direct concussion). My friend (the master) explains this behavior as the pressure wave and shock wave traveling at different speeds through the piece, the ridging is the waves interacting. These breaks tend to pop up and out of the rock stopping the break early in an edge, rather then propagating all the way through in a (near) straight line. When this happens it makes your later breaks harder, and is generally a mistake. A master may still do this when trying to get extremely long narrow breaks, but it'll tend to be rare, and small.

So, staring at the piece on the left, and the piece on the right, you can probably start to pick up some of the differences between what it looks like when a master is working fairly fast, and a novice is working slowly. Now imagine a master who works just a touch faster, because they are not making art pieces, they are making tools that they need, and "good enough" is the name of the game.

Looking back at the pieces at the top, to me they read a bit more like a master knocking out entirely functional pieces very quickly. I find this pretty interesting, and I believe it's indicative of probably not being some kid screwing around, but probably useful points made by someone who did this a lot.

To be honest, I have broken very very little chert, so I may be reading into these pieces completely incorrectly. Sometime I should try and get my hands on this type of chert and try breaking it to get a better idea.

Most of these points do appear to be projectile points, and given their size the largest one (on the far left) is probably an arrow point. I've already talked about the smaller ones, but what about the one second to the left?

I find the one second to the left really interesting. Looking at this point I can't figure out how it would've been hafted. It's slanted all of the way up the sides.

If you look at the clovis point (the super pretty one my friend made) it's almost flat on the sides, and very thin at the base. To haft this you bind a stick maybe 3 inches down the shaft, split it down to the binding, slide the stick over the base of the point, and then wrap it with sinew. Works great.

The rest of the points are pretty obvious, you do a split shaft (or maybe even carve out a notch) and then wrap it just above the "ears" sticking out at the bottom, sitting hte string in the notch in the point made for that purpose.

That one point though has no ears, and is more slanted than I would've wanted to simply wrap. This makes me think it might be a different tool entirely. Maybe it was an arrow-point and broke, and what we see is a tool made from the tip that broke off? I don't know, but I'm really curious if anyone else can tell me.

Oh, one more thing. Some of these could be drills, there is something that makes me think they aren't though. The wide ones are wider than I've ever seen a drill made before, there is no advantage I'm aware of to making one like that, though it did occur to me that a repeatedly sharpened drill would slowly head towards this shape. Still though, I'd expect a drill to be used until the tip snaps off or is at least extremely dull (unlike arrow heads which are frequently lost). These all seem sharp.

Conclusion
I don't really know that much! Just a bit. I'd love to hear anything anyone else has to say about these points and why. Don't be shy, and feel free to disagree.

P.S. sorry about the comments section, I've been poking at alternative blogging software but just haven't gotten around to really doing anything about it.

UPDATE
My mom gave me some more specifics. These would've been gathered closer to 1930, and their ranch was a long-term lease on the Mescalero Apache Reservation, east of the Sacramento Mountains, about 15 miles south-west of Cloudcroft.