I can't call this experimental archaeology, because the Bantu Pigmi and Baka people are using this trap today, as I write this post. So, I'm going with experimental anthropology ;-). 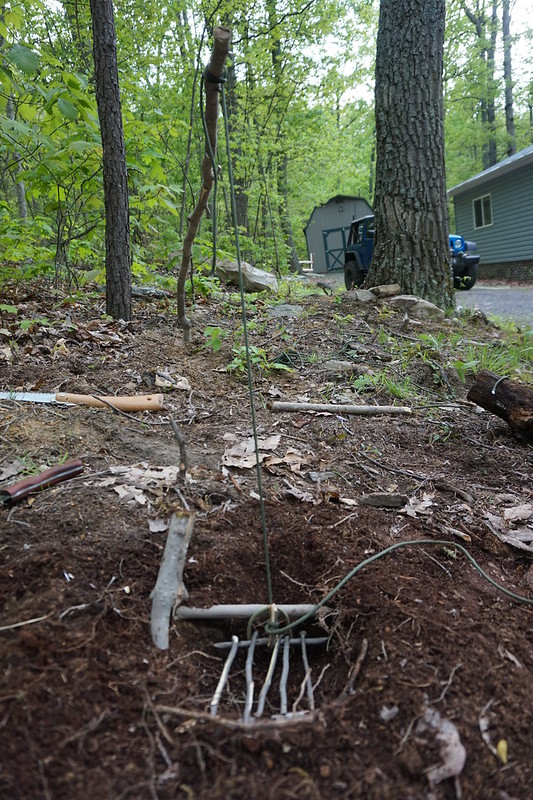 Everything I know about this trap I learned at Rivercane Rondezvous from Todd. Unfortunately, I forgot his last name, but he is the one who went to Africa and learned this trap from the Bantu. So, first credit for this trap goes of course to the Bantu and Baka. Credit for coaxing this information through too many translations, cultural barriers, etc. is well, the Bantu and Todd. I just made a crude replica and took a few photos ;-).

Sorry if I use a term which is not the most culturally sensitive. Since Todd talked with these people, I'm taking all of my cues from him. Todd taught this trap for the purpose of sharing it, and to protect the knowledge from loss in the event of a complete collapse of the Bantu and Baka. I figured the best way to honor that is to share it as widely as a can. So, this post is my attempt to share this trap more widely.

Note that if you try and set this trap the spring-pole is quite dangerous. Get down with your arm over as you're setting the trap so it can't spring up and hit you in the eye. This was very very important to the Bantu people who taught it to Todd, as apparently a number had lost eyes to this trap.

So, there's a springpole (as in the first picture) with a piece of cordage running down to the trap itself. Here's a closup of the trip mechanism. 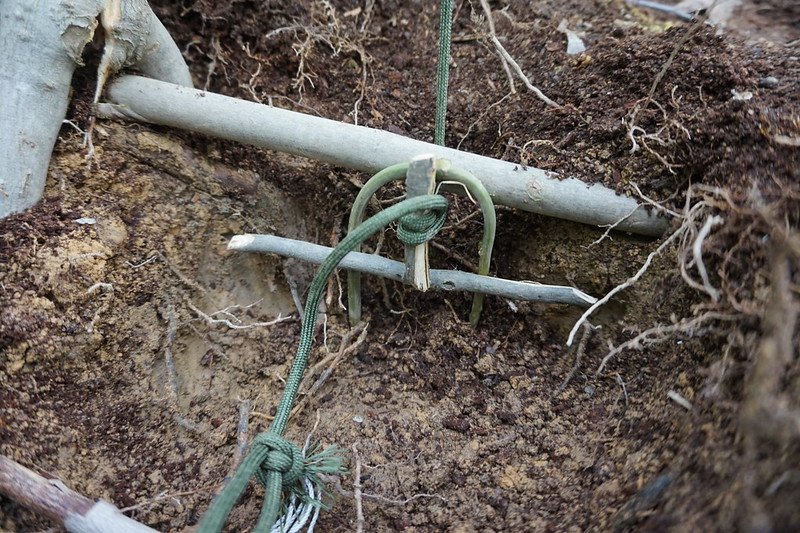 The cross-pole is pushed in to the ground on one side, and held down on the free end by a forked stick. One side of the fork is long and driven in like a stake, the other can be short. You can see in this photo that I accidentally split mine, but it was holding so I went with it.

That cross-pole is the basis to support the load of the spring-pole. Next we take something very slippery, bend it and stick it in just in front of the pole (held in place by it). I used greenbrier here, same as Todd did, but obviously they used something else in Africa. This supplies a slide/support for the cross-stick that acts as the actual trip for this trap. This is the end of the non-mobile components of the trap mechanism.

The cross-stick or trigger-stick is held in place by pressure from the toggle. The back side of the trigger-stick should be slippery as well, I removed the bark from that side in the trap pictured here.

That's the basics of the trap. Now we use that trigger stick and use it as the support for one side of a trigger plate built out of cross sticks (the other side is immobile). As pictured below. 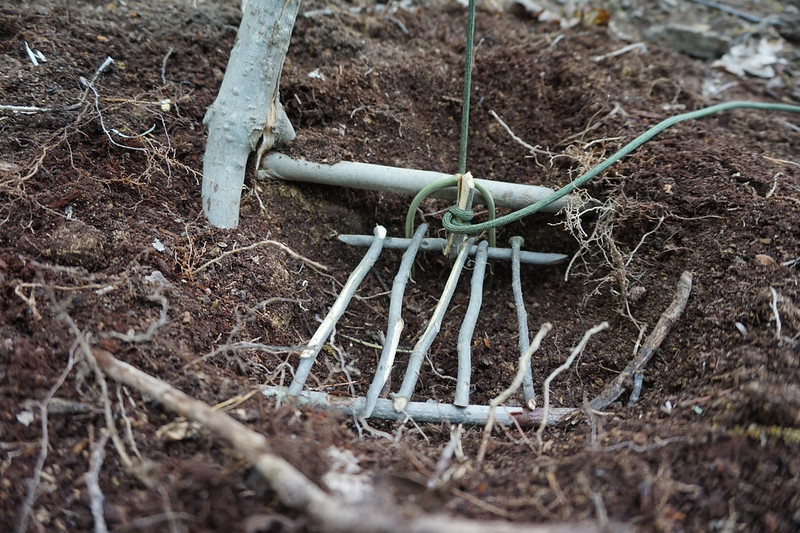 In a real trap we would then cover this with some leaves and sticks disguise it up most of the way. Then as the next to last step we would spread the snare. I'm leaving out all the disguising in the following photo to make everything easy to see 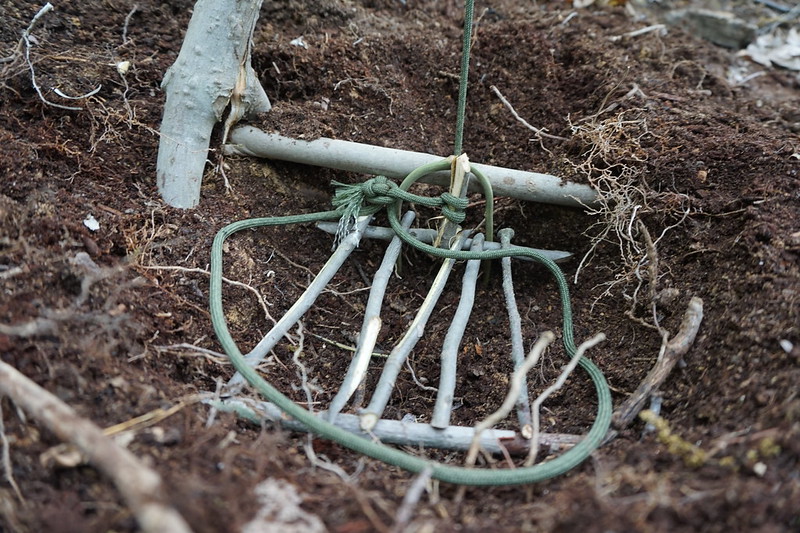 The animal steps on the foot-plate, that slides the trigger stick down releasing the toggle. This allows the spring pole to snap up, closing the snare on the animals foot. Here's what tripping the trap looks like. 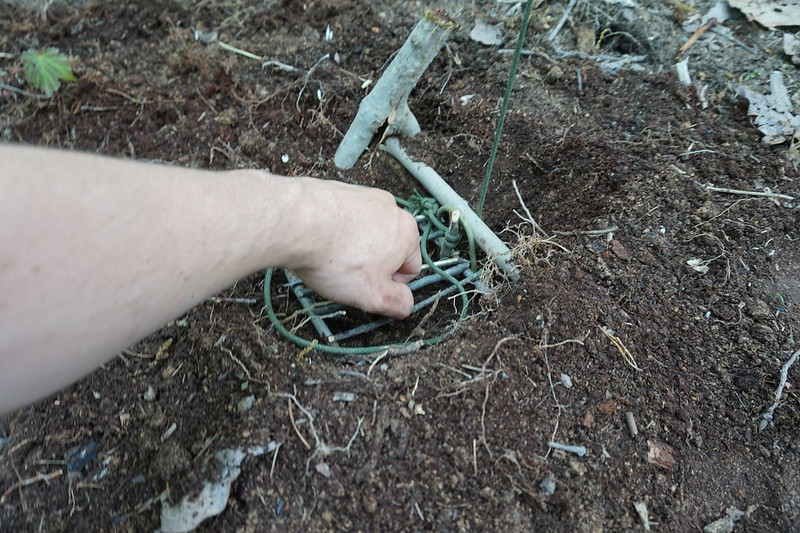 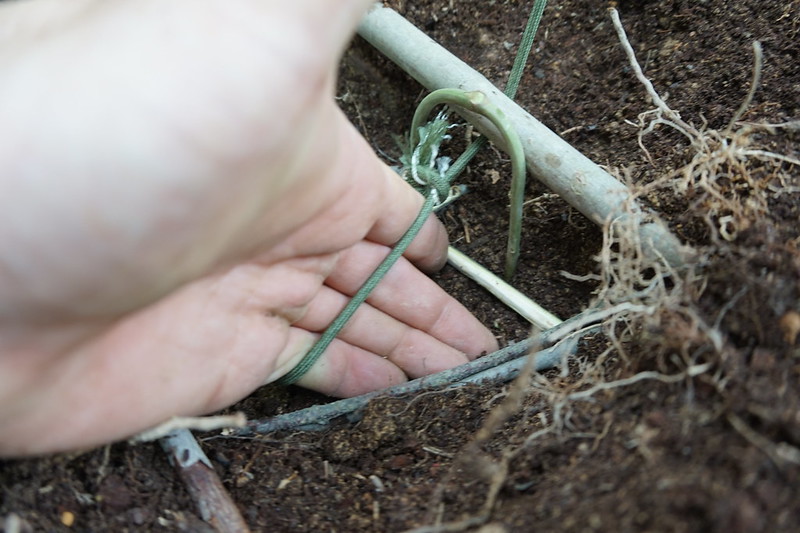 Lastly, here's a couple pictures of my very poor and rushed attempt to disguise the trap. 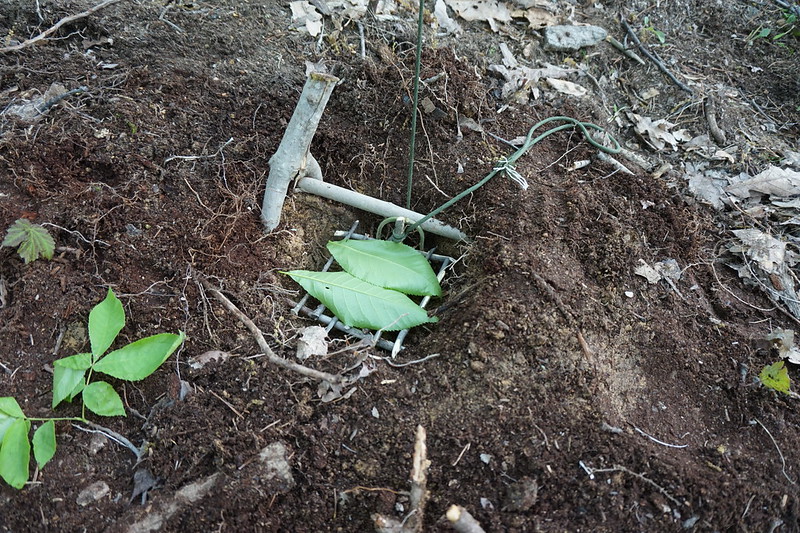 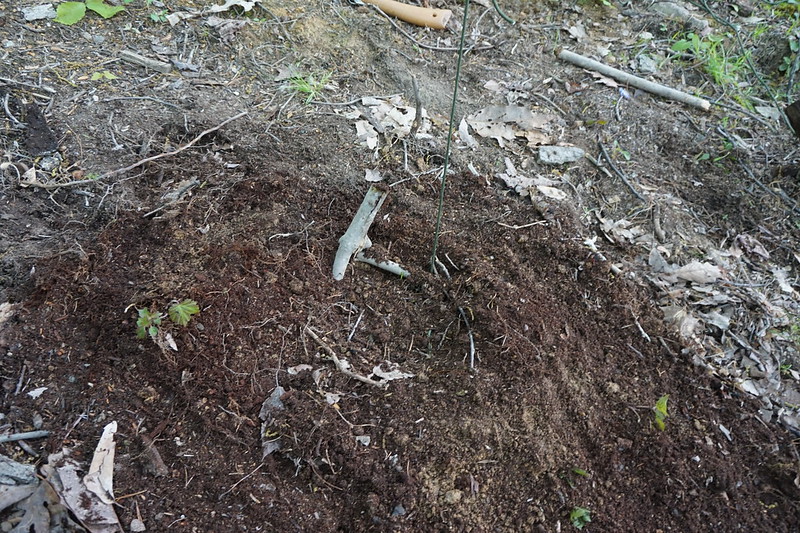 Any real trapper sets their traps over and over and over again, and thus practices making it look just perfect so nothing will suspect there's a trap there at all. If anything you want to make that spot of ground look like a slightly better spot to stick your foot than the areas around it.

The place he visited is a National Park technically, where these peoples are living. Hunting there is apparently not legal technically. Their societies (especially the Bantu) are living on the edge right now. Every hunter has secrets they will not share. Todd suspected that they never showed him one of their actual sets, because then they'd be giving away their trap location, and that means another person (frequently from the same tribe) could check that trap and steel their catch. This is one of two trap sets they showed him.

This set is used in favor of extremely large deadfalls that had been used previously, for trapping large game, as it is safer for the trapper themselves. In theory, if you could drive the pole far enough in, or used a well rooted tree it could keep the animal from breaking even relatively weak twine by being unable to shock the cordage. Todd believed that these peoples lacking sufficiently strong twine or a way to anchor the poles, but were good enough trackers that an animal with a pole hanging off it's leg was a done deal, and would simply track the animal down and kill it.

Note that I used a separate tree-branch, despite the anchoring advantages of a normal tree. This trap would be set multiple times. Todd explained that the dead tree-branch stuck in the ground won't take a set as badly as a standing tree would, thus using a dead branch stuck in the ground actually increases the traps working life. This is particularly useful since this trap will sometimes trip without catching an animal.

This is one of the most elegant traps I've ever seen. It's not as simple as a promontory peg, but it's only a little more complex than a Paiute dead-fall. Like a Paiute dead-fall it's extraordinarily easy to set. You can get very light set on it and still set the trap quickly and easilly without having it trip on you as you're working. In practice I would guess that because it's a foot trap you don't actually want a super-light set on this trap anyway, a little stiffness will help make sure the animal commits their weight to the foot before the trap trips. I didn't check with a scale, but I'd hazard that the plate pressure on the trap pictured here is a bit on the light side for a fox actually, if you wanted to get picky.

Like any primitive trap it takes making a few before it gets easy. I struggled to build this trap, but it is the first springpole trap or snare I've ever built. It's also the first primitive foot-plate trap I've even seen.