After getting our truck back in traveling fashion, we headed down to our friend Adam's place in Missouri, where it's the time of year for controlled burns. I wrote about Adam once before http://www.blog.smalladventures.net/2016/10/ecological-restoration-with-adam-weiss.html . 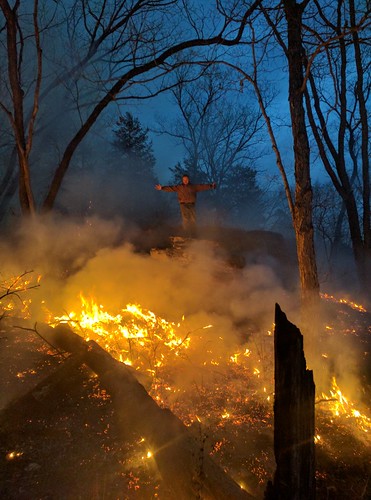 When Europeans set foot in the Americas, the midwest was mostly open Prairie. The reason for this is that fires regularly rolled across the plains. The Prairie ecology is made up of plants that have evolved with fire. Without fire they can't outcompete other plants, and in fact, many will fail to even germinate, as they've developed germination directly after a fire (the one time where there is no other full-grown vegetation to compete with) as a competitive advantage. Before we began farming these areas, much of the great plains had 10 feet of organic matter in the soil. Talk about rich fertile soil, and if nothing else that's an incredible amount of carbon burial.

I realize how counterintuitive this is... burning prairie *facilitates* carbon burial because prairies bury carbon as very slowly decomposing organic matter beneath the soil. When you burn a prairie, you're only burning the bit above the soil, furthering the ecology capable of storing it underneath. Each time it's burned the carbon released is soon reburied as the field sprouts up again, so even this carbon stays in a closed cycle until buried as root masses and stalks and such under the soil.

Anyway, all this means that if you want to bring back native plants and animals to these areas, you have to burn them... and as a bonus, it's really fun!

It's winter, so in general things are colder, and many perennial plants are dormant so will survive the burning. Adam says you can burn at other times though, depending on what plants you are trying to keep. Adam's obsessed with the weather and watches it like many people watch Facebook these days. For this burn he carefully chose a day with humidity low enough when things would burn well, after a decent spell without rain. If the humidity is really low the fire could easily run out of control though, and he wanted an easy to control cool fire for this burn. He also waited until the wind was very low, again to make the fire easier to control. This tends to happen most evenings even if it's been a nice sunny day (good for drying out the dew).

First we checked the fire-breaks were solid. Then, after making sure we had sprayers loaded, and weren't wearing plastic clothing, he gauged the wind direction. Then he went to the downwind end of the field and lit up a small fire, so he could watch the smoke 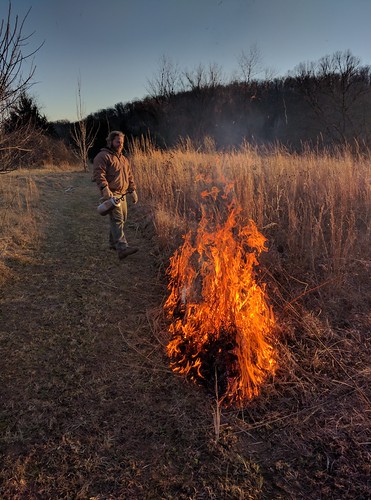 Seeing that this was squarely the downwind end of the field he spread that fire across the downwind side. This is called the "back fire". 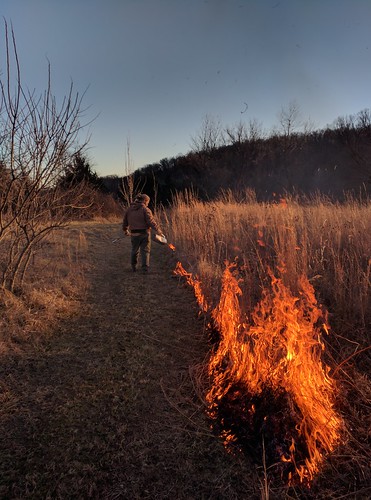 Once it had burned a few feet in to the field, he put a line just a few feet upwind of the first line of fire. This line has fuel downwind of it, but only maybe 6 or 8 feet of it, so it burns much faster, consuming that fuel, but not hot enough to be a problem and jump across. I think this is just a way to speed up the backfire. 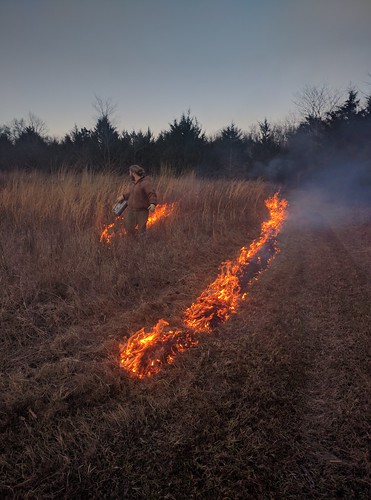 This creates a really nice fire-break as it clears all burnable material away. 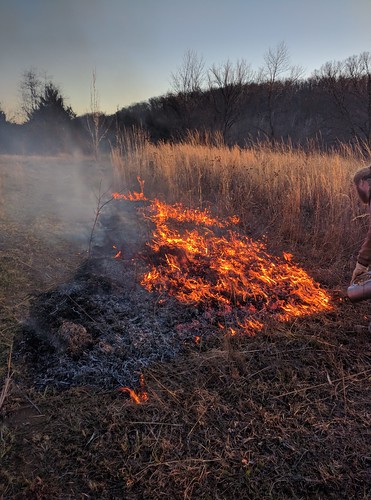 Using these two techniques he works his way around the field, working the edges towards the upwind side. Moving further forward only after he's confident the ever growing firebreak (due to the fire slowly marching in to the wind), is wide enough he can be confident it's not likely to jump, or at least would be easy to control if it did. (this picture is of a different fire, but is illustrates the point well). 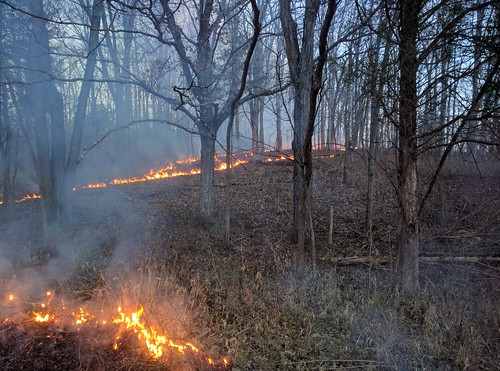 Lastly he goes across the upwind side of the field and lights *most* of it (though not all)... The opening he leaves gives any small mammals such as rabbits an avenue of escape. Even if you don't care about small furry creatures (who are part of the ecology too) Adam's friend pointed out, a rabbit on fire running through the rest of the prairie will cause a mess really quickly. 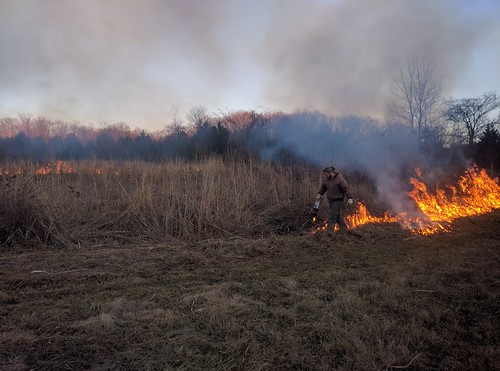 This last fire is called the "head fire", as it's upwind of the fuel. Having lots of fuel downwind to burn it roars up in to a huge inferno, and this is why Adam did it in that order, because the back fire marching in to the wind from the other side of the field has by now created an enormous fire-break that even that hot fire is unlikely to jump. 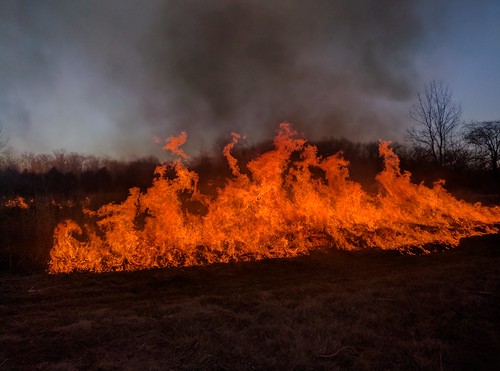 And now... here's some more cool pictures of fire :D 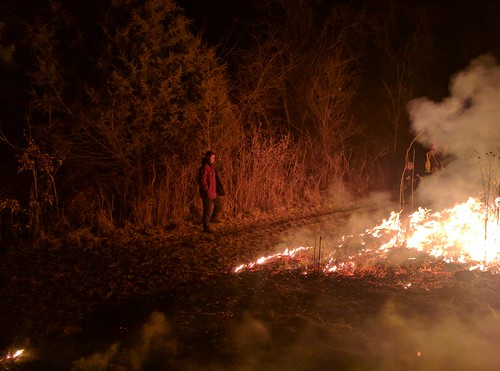 We also burned a section of woodland, after raking around each tree (Adam doesn't normally do this, but he had an overly hot wildfire run through here a couple of years ago just before his planned controlled burn, so he wanted to give the trees an easy time of it). This was a much cooler fire, hot enough to reduce the number of seedlings that come up and keep an open woodland with a very different ecology, but not hot enough to kill off full-grown healthy trees. This is another type of natural fire ecology. Adam had more help with the woodland burn, as the fire-breaks are necessarily not as good. This is the head fire marching slowly up the hill (the wind is light, and fuel sparse, so it was slow in this case). 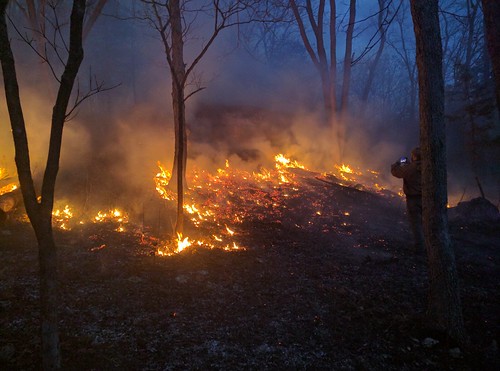 This fire got hot enough it singed my cheek at one point. I found it pretty difficult to capture just how dramatic the fire was. Flames 20 feet tall at times when the head fires got going across the prairie areas. 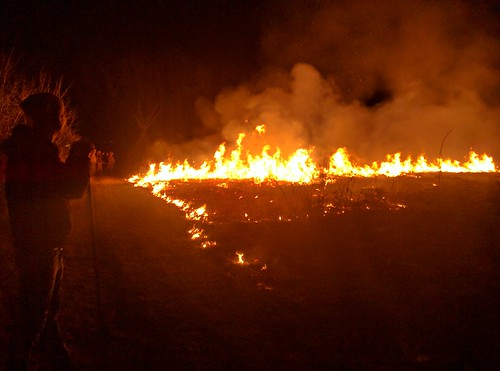 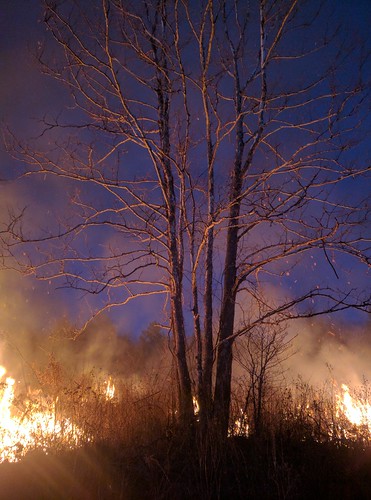