Food photos!
Everyone else does it, I guess I can't resist.

At the gathering Jess and I learned that the new growth tips of greenbrier are tasty in the spring. Well, on Friday evening I decided to try it. I went out and picked a bunch. Since I was picking greenbrier anyway I figured we could have it with some roadkill venison and have an all local gathered meal. This was our first time eating green brier in quantity, so we kept it as a side-dish.


As it turned out Jess' brother was coming over, so Jess picked a bit more green brier and made some mashed potatoes to bulk it all up. I enjoyed the dinner greatly. Sadly, it seems that I gave her brother one of the tougher cut of meat, but he still liked the flavor. Jess mixed up a salad dressing with a bit of honey, olive oil, and vinegar. 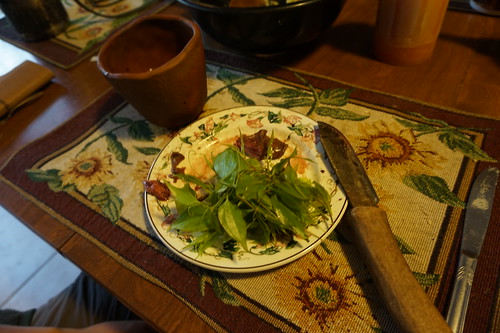 I forgot to take a picture until we were almost done it was so tasty, here's Jess' plate. As a bonus Jess made the cup in the photo, and fired it in an open wood fire. The knife was made by a friend, acquired by trading a softened but unsmoked sheepskin.

This evening Jess wanted to try another dish using the greens as the primary bulk of the meal as she was craving veggies, since the side-dish went over well. she picked a bunch of green brier (I helped her pick just a little more). I went on a mountain bike ride today, so was a bit hungry so we bulked it up with some store-bought green-beans after picking out the easy to get to briers right here. Then we made my family's spinach salad recipe. We fried up some bacon, used some balsamic vinegar, sugar, and salt mixed with grease from the bacon, and poured that over the greens. We were quite happy with this for dinner, lots of electrolytes and vitamins. 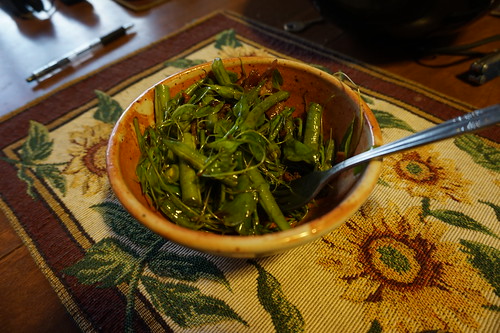 Again I forgot to take pictures until we were almost done eating, but at least I remembered at all! The bowl in this photo was made by Kempy, a good friend of ours.

Backing up a bit, the challenge with wild greens is finding sufficiently *bland* greens that you can use them for the base of a salad. There are TONS of tasty greens, but most of them are too spicy, strong, bitter, or whatever to use as the primary base of the salad. Such greens are super delicious in small quantities, as a garnish, but you wouldn't want to eat a ton of them, you're likely to get too many vitamins to be healthy, and it's just not tasty. Green brier on the other hand is extremely mild, and a bit sweet, making it a perfect bulky base for dishes like spinach salad, where the greens are completely raw.