I ended up with 2 antique lanterns and an antique stove.

My parent's gave me this lantern for Christmas: 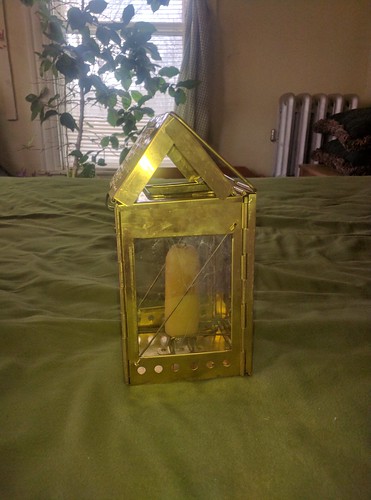 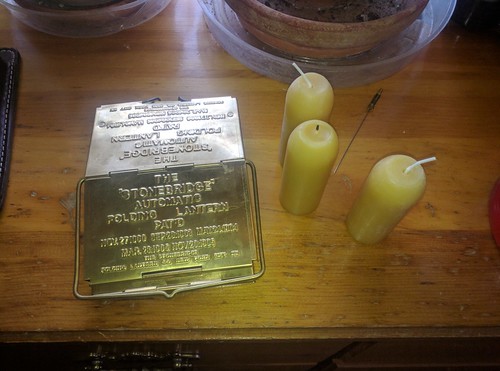 This is sold as a "portable brass candle lantern" by Garret Wade. It turns out this is a non-exact replica of a "Stonebridge Automatic Folding Candle Lantern" (thus the writing on the top), which was invented around 1906. Here's some further information on it http://thewoodslife.com/?p=82

The glass is actually mica, which is less brittle than glass would be. It looks very usable and robust in practice, folding flat with the fragile bits protected by solid brass when folding and popping open almost on it's own. It's kind of an amazing piece of gear, and has an undeniable attraction and ambiance to it as well. The only downside is that this one weighs about 18 ounces (contrary to Garret Wade's site, which claims 12 ounces). Then each candle is 2 ounces. That's a little much for using backpacking, though it may not stop me from bringing it on a trip eventually as I hone my gear further.

My parent's also said that I could have one of their antique candle lanterns from the attic if I wanted it, so we went digging in their attic for a while and I eventually turned this one up: 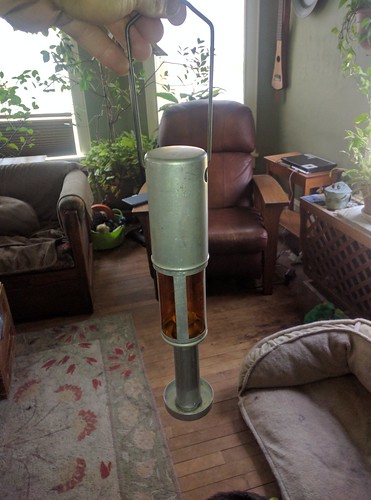 This is an old Trangia candle lantern. Trangia is a Swiss company making gear for, among other things, the Swiss military. So, in the most literal sense, this is a Swiss Army lantern.

It's made of aluminum. The bottom section holds the candle, and a spring to feed it. The middle section is what looks to be a cellulose based "glass" to let the light pass through, and the top is just a chimney, protecting the flame from the wind further. The whole thing telescopes twice in to the top. Looking around the internet I was able to find only one picture of this model lantern... so now I guess there will be more.

Here's the section the candle fits in with the feeder spring: 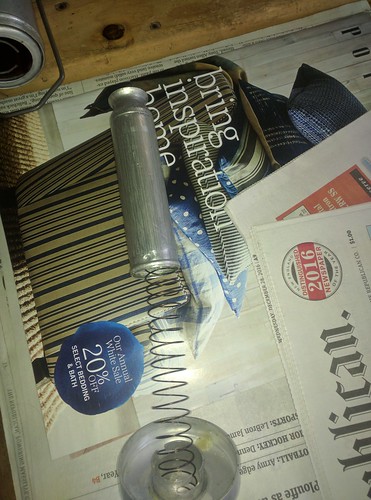 It's a really cool lantern, looking very pack-able and robust while packed, while weighing in at ~4 ounces. The candles are thinner, so will burn up faster, and they have to be a perfect fit, where the other lantern allows you to fudge almost any candle in to working. These thin candles are a little harder to find, so I may have to experiment a bit figuring out what is easy to get and works well. If I can figure that out this lantern may be just the ticket for my non-plastic backpacking gearset.

Lastly, while my dad was up in the attic he also found this stove: 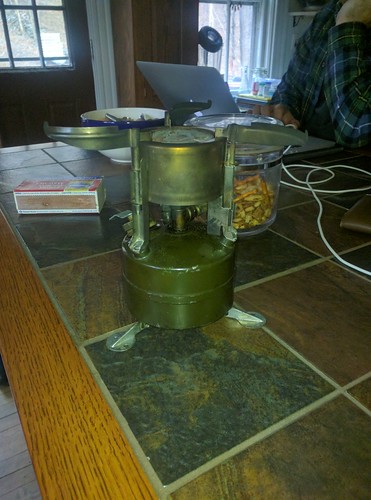 It's a classic Coleman from around the Vietnam War era. It needed a little oil on the leather pump gasket, but that's it. I just tested it with a little help from my dad and she lit right up (with a few bouts of 5 foot flames, hopefully I can get a little better at it). Fundamentally it's the same thing as any of the modern whitegas stoves, like the whisperlight that Angie and I use. The packaging is just a little different. The stove just goes perfectly with the Coleman 200A lantern I finished refurbishing recently (also out of my parent's attic).

I remember using the Coleman stove backpacking when I was a kid, alongside a svea and an optimus 80. My dad carried the Trangia lantern for years. My aluminum cookset was also my dad's and one of the pots we know is from at least the 60s, and dad got it used then. There's something about old gear. It embodies a connection with the past I guess. But, even practically you know they are good, or they wouldn't be around anymore. All of these pieces, like the 200A, are incredibly simple. There's no plastic, and they are made to be repaired not thrown away. When I asked dad how to clean the jet on the Coleman he said he's never had to, and his dad had one and never had to either.... A lot of this old stuff just works. Often the new gear is too much better to warrant it, but all things equal I'd always rather use old gear than new. I like the connection to the past.

“Have nothing in your house that you do not know to be useful, or believe to be beautiful.” ― William Morris

Both is even better, and to me well made axes, knives, stoves, lanterns, and their ilk embody that spirit like little else. I don't know if all of this stuff will come with Angie and I back to North Dakota... but some of it will, and I'm not letting go of any of it either. I hope to report back on actually using some of this stuff once we get the truck sorted out.