I got a Toyota Tacoma again, and I'm selling the Jeep.

My last Toyota was shared with Jess. When we were planning to settle down and buy land she started looking at cars. In the end I sold her my half of the pickup because it was perfect for doing K9 Search and Rescue, and I got a Jeep, because she already had a pickup, I work from home so mostly drive to get to the woods and we were going to settle down in Virginia, so why not a convertable? Also, it was cheap ($25k out the door) and available in manual. I loved the Jeep, and it was fun. I spent a few thousand upgrading it, e.g. http://www.blog.smalladventures.net/2015/03/jeep-mods.html , and learned a lot in the process.

Well, we broke up, and all my life plans changed, and now I had a Jeep. If you read:
http://www.blog.smalladventures.net/2013/10/review-tacoma-as-camper.html you know how much I loved owning and living in a 4wd pickup truck. I pondered and pondered and looked at every vehicle out there. I considered 4wd vans, large SUVs like the ford Excursion, full size trucks, regular cab trucks, keeping the jeep and pulling a trailer, roof top tends, everything you can think of.... and in the end I circled around. The inability to sleep in the vehicle on http://www.blog.smalladventures.net/2015/11/trip-report-boondocking.html, Just confirmed that although the Jeep was a blast, it wasn't for me.

So, I went looking for a 4wd, v6, manual, Toyota Tacoma, between the years 2000 and 2002 inclusive, with as low of miles and as flawless a frame as I could find (tacoma's are known for frame rust), and preferably with a locker. Eventually I found one for $15,700, with 74000 miles, sold by a guy I trust (every truck on his lot was in excellent condition), that had been recently shipped out here from Reno, so had not a spec of rust on it. It was a little expensive, but worth it... so I bought it.

And thus, Jack the camper 2 began. Like the farmer who calls every mule he's ever owned Jack, I decided to re-use the name. The photo below is from the day I picked up the cap... in the middle of a snowstorm. 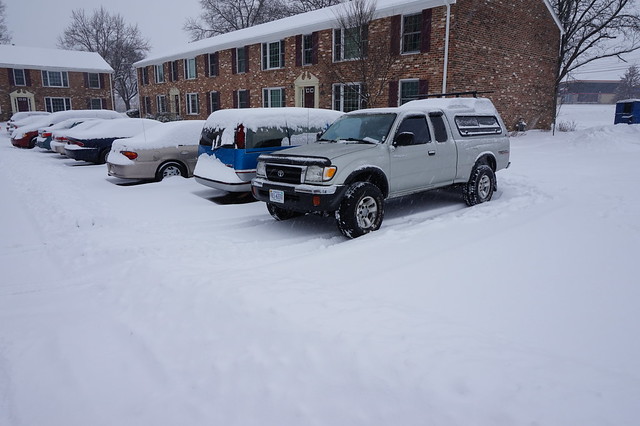 Here's the build plan I've been working on: https://docs.google.com/a/smalladventures.net/spreadsheets/d/1_ZWVUtGTnxuYMNcJOHucrMbbrerY1BwLsxxAgM757AI/edit?usp=sharing

Step one was to undercoat the whole thing with fluid film I swapped all the fluids (it had non-toyota coolant), pulled the security system 'cause it was obnoxious, and installed a fire extinguisher. Next I got a Leer 122 cap installed with windoors (like I had on the last truck) this time with a 12V power block as well. Yesterday Angie and I installed a new tougher bumper so we wouldn't wreck the truck if we back in to a tree while off-road, and so I have a hard-point and can pull my trailer. I also installed trailer wiring. I'm also slowly removing all the badging on the truck and cap.

Angie is learning to drive stick. She's getting pretty good, but isn't comfortable yet. Yesterday she asked "Why would anyone get an automatic Jeep", and I got a huge grin on my face. Another manual driver is born. Today we finally got Jack to a state where he's usable as a camper. Here's what the back looks like now. 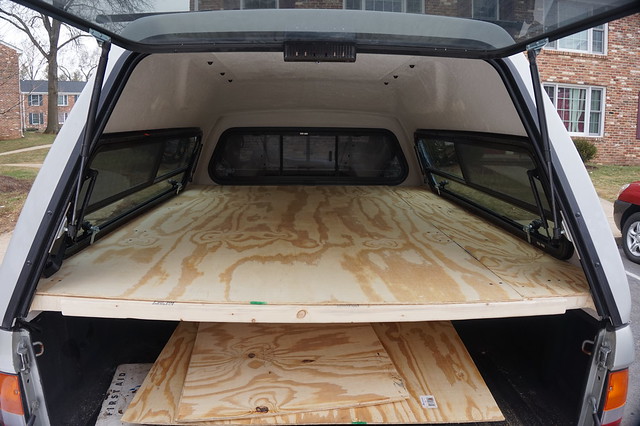 My Jeep is currently for sale. My budget for Jack is whatever I can sell the Jeep (and trailer) for. I'll be writing up some of the specific projects on Jack as well.

As an overview the goal is the same as the last time. I'm looking for a vehicle I can camp out of short-term and live out of long term. The goal is reliable, robust, lightweight, fairly capable off-road so I can boon-dock, but good for long-miles on road. Most of the options I considered were thrown out for reliability reasons. It's hard to beat a Tacoma. A Roof Top Tent was thrown out due to difficulty stealthing, and them just not being that great for snow, wet, and cold. Mostly because of difficulties with drying the material so it won't mold/mildew (Jane ended up soaking wet for almost 2 months straight at one point due to freezing and thawing combined with rainy weather... an RTT would likely not have survived). I wanted something narrow enough to fit down difficult trails, and I wanted a lot of cargo capacity.